MotoCzysz, an Oregon-based builder of high-end, high performance motorcycles, won the second Isle of Man electric Tourist Trophy (TTZero – for zero emissions) race today, June 11. The MotoCzysz E1PC eclipsed last year’s overall speed for that event’s winning Agni bike of Cedric Lynch, 87.434 mph, and raised that over 10 percent, to 96.820 mph. It came close to running a 100 mph lap of the island, according to Gizmag, but Mark Miller, the Californian riding for the team, held it back to ensure a finish and a win. It did go through the traps at one point at over 135 mph. Even the Agni Z1 ridden by Rod Barber, was faster than last year, finishing second at an average speed of 89.290 mph.

Despite the improved times, electric motorcycles still lag behind their internal combustion cousins, but are making progressive leaps toward equalling the best laps of 1,000cc racers. This sudden interest in electric tourist trophy racing is a result of backing and superb organization from Azhan Hussain, founder of the TTXGP.  Three series of races are being run concurrently, in the United States, United Kingdom, and Italy, with an international final series to be held later this year. 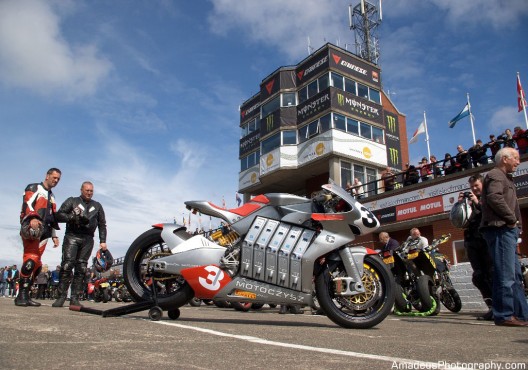 MotoCzysz has been developing the E1PC for several years, culminating their efforts with a 35 kilogram (77 pound) motor capable of exerting 250 foot-pounds of torque.  Not much happens visually in their dyno run, but auditorally, the sounds are as different as the exhaust notes of their gasoline-powered machine.  The liquid-cooled D1-10 motor is controlled though a “near-wireless” network that connects components on the bike.

Congratulations to Michael Czysz and his winning team.  We look forward to more TTXGP racing and continued progress.