The first set of questions is intensely personal.

These provocative questions highlight a web page from KAIST, the Korea Advanced Institute of Science and Technology, which focuses on the Institute’s work with piezoelectric devices.  Such devices can tranform vibrations, pressure, and other mechanical forces into an electric current.  Older “hi-fi” systems used piezoelectric cartridges in their LP-playing tone arms to transduce the vibrations from a needle touching the record’s grooves into signals to the system’s amplifier. 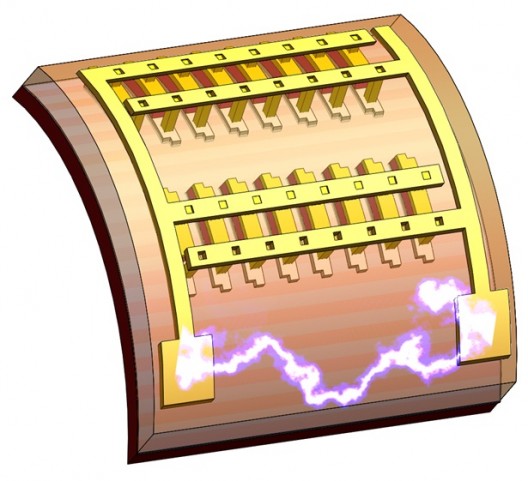 According to Gizmag, this first self-powered nanodevice has its own wireless transmitter, allowing monitoring of a patient’s vitals remotely without the usual bulky hookups.  Better yet, as long as the monitoree is alive and kicking, he or she will generate enough energy to keep the monitoring device active.  Battery or device replacements could be a thing of the past for bearers of defibrillators and heart pumps.

Looking at a larger footprint, so to speak, piezoelectric pads in shoes could generate enough power – about 3 Watts – from the wearer’s walking to run an IPad, cell phone or MP3 player.  According to Gizmag, the devices have an energy conversion efficiency of about seven percent.

“’The generator is mainly made of plastics and zinc oxide, so the materials are environmentally friendly,’ says Wang.”  The materials stand up to thousands of flex cycles and show no reduction in performance, highly important to the pacemaker set.

Part of the success the research team achieved was in making ceramic materials with a perovskite structure part of an easily manufactured product.   Since these calcium titanium oxide minerals are so brittle, FAND’s ability to make a “bio-eco friendly nanogenerator that is freely bendable without breakdown” is a major achievement.

Wikipedia lists, “Physical properties of interest to materials science among perovskites include[ing] superconductivity, magnetoresistance, ionic conductivity, and a multitude of dielectric properties, which are of great importance in microelectronics and telecommunication.”  The implications are far-reaching and not un-noticed by other researchers.

Wiley Advanced Materials published the team’s Paper (PDF) in its April issue of the online journal.

Other researchers include Innowattech, an Israeli company testing the larger limits of piezoelectric capabilities.  If a pair of shoes with an average size person in them can make 3 Watts, what would highway traffic or trains rolling over rails generate?

Their web site discusses the new technology, “Which enables harvesting and conversion of mechanical energy of the passing vehicles, wasted throughout movement, into electrical energy.

“The mechanical energy is derived from the compression stress created during the vehicles’ travel on road.”

Innowattech’s Weigh In Motion (I-WIM) system produces electrical energy as a function of the number of vehicles, their weight and velocity.  Pressure transducers can be installed in concrete or asphalt roads, and a short stretch of test road has been installed and is generating electricity.

According to their spokesperson, the system can provide 200 kilowatt hours per hour on average for a one-kilometer (0.62 mile) single lane of highway, enough to power 250 homes.  Innowattech notes that installation can take place during repaving of existing roads, since the generators are only five centimeters (two inches) under the road surface.  This has the added benefit of using existing infrastructure.

This infrastructure can include railroads, sidewalks, and even industrial plants.  The pressure imparted by drop presses to the floor could generate significant amounts of electricity and help power the facility.

In aviation, the pressure of a jetliner rolling on a runway or taxiway could help power the airport, and the pressure of a landing  jumbo jet could generate as much as three megawatts of energy, according to other sources.

Whether at the nano or the macro scale, piezoelectrics have a profound future in the overall scheme of things.