Nanopapers are, like the paper we use daily, made from wood pulp, but in this case reduced to nano-sized lengths and formed into “a network of nanofibrillated (tangled) cellulose (NFC).”

This tangled network, a seemingly impenetrable mass, is surprisingly transparent, and the paper’s increased light scattering makes it 90 to 95-percent transparent (a counter-intuitive thought).  Earlier discoveries showed that coating the paper with carbon nanotubes “made the paper very strong and highly conductive, which could allow it to be used for printed electronics (such as circuit boards) and in products that require a lightweight construction.” 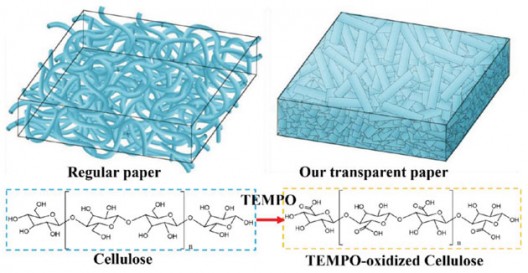 University of Maryland, along with U of Nebraska-Lincoln and South China University of Technology, produced this nano-structured paper used in solar cells

Extracting NFC from ordinary paper fibers is a time and energy intensive process, so the next batch of  nanopaper won’t use these fibers, instead “detangling” or “unraveling” the cellulose through a process called tempo-oxidation to make “nanoribbons.” Nanopaper made from these ribbons is 91 percent transparent, has its surface oxidized to increase strength, and has a layer of silver nanowires for conductivity.

A TEMPO (Tetramethylpiperidinyloxy) NaBr-NaClO oxidation system introduces carboxyl groups into the cellulose, weakening the hydrogen bonding between the cellulose fibrils and causing the wood fibers to swell up and collapse. The resulting high packing density and excellent optical properties combine high transparency and high haziness.  This approach uses less energy and takes less time than other methods used to break down cellulose.

Able to scatter light better than the considerably more expensive indium tin oxide currently used in solar cells, the new nanopaper might lead to greater light absorption and more efficient solar cells.  It’s also recyclable, a green alternative to the often messy problems of ridding ourselves of our electronic debris.

Liangbing Hu, a co-author of the research at the University of Maryland says, “No other transparent substrates have such properties that are ideal for solar cells.”

The team laminated the paper onto an organic solar cell to test it, and saw the power conversion efficiency increase from 5.34% to 5.88%.  (Note that organic solar cells tend to have lower efficiencies than silicon types.)  “Our transparent paper can increase the energy efficiency of any type of solar cell where light trapping is helpful,” says Hu. “This will enable low-cost solar cells based on wood nano structures.”

Chemistry World reports, “’This is the best example I’ve seen of integrating a simple scattering medium as a photon concentrator,’ comments Anthony Harriman, who designs artificial photsynthetic systems at Newcastle University, UK. ‘The diffusive nature of the paper is most impressive and could lead to important advances in designing simple optical circuits without elaborate tracking devices.’”

Researchers working at the University of Maryland, University of Nebraska – Lincoln, and the South China University of Technology reported on this and related work in Nano Letters,  Scientific Reports, and Advanced Functional Materials.