Long-time friend of the blog, and occasional corrector of the editor’s attempts at incorporating French into the proceedings, Colin Rush sent this link to a story about photonics in the Christian Science Monitor.

“Wires 1/10,000th the diameter of a human hair can absorb more of the sun’s power than previously thought possible, a new study in Nature Photonics suggests,” writes David Unger, an energy correspondent for the Monitor.

Unger’s lead paragraphs pushed your editor to look up several related terms and look further into the researchers’ own writing.  “Although still years away from production, nanowire solar cells could push the conversion efficiency of the sun’s energy past the so-called Shockley-Queisser limit, which for decades has served as a fixed ceiling in solar energy research.

“Such a breakthrough would be significant because the sun’s power is wildly abundant, but diffuse, and difficult to harvest. Even increasing the limit by a few percent would go a long way in making solar a more viable alternative to fossil fuels.”

The Shockley-Queisser limit refers to the limits to which single-junction P-N solar cells can be pushed in their ability to absorb light.  A team at the Nano-Science Center at the Niels Bohr Institut, Denmark and the Ecole Polytechnique Fédérale de Lausanne, Switzerland, have exceeded that limit, with research that has elicited phrases such as “exciting” and “surprising,” not normally found in objectively scientific write-ups.

Peter Krogstrup, Henrik Ingerslev Jørgensen, Martin Heiss, Olivier Demichel, Jeppe V. Holm, Martin Aagesen, Jesper Nygard and Anna Fontcuberta i Morral contributed to the paper published this month.  The abstract suggests that their approach can produce solar cells capable of exceeding the Shockley-Queisser limit by an order of magnitude above that predicted by the Lambert-Beer law, and that shows “enhanced light absorption due to a light-concentrating property of the standing nanowire.”

These results demonstrate the great potential of development of nanowire-based solar cells, says PhD Peter Krogstrup on the surprising discovery  described in the journal Nature Photonics.

The nanowires naturally concentrate the sun’s rays into a very small area in the crystal by up to a factor of 15.  Because the diameter of a nanowire crystal is smaller than the wavelength of the light coming from the sun it can cause resonances in the intensity of light, thus concentrating sunlight and giving higher conversion efficiency. 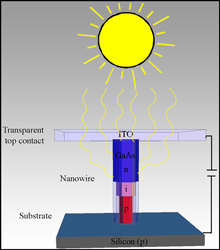 The sun’s rays are drawn into a nanowire, which stands on a substrate. At a given wavelength the sunlight is concentrated up to 15 times. Consequently, there is great potential in using nanowires in the development of future solar cells. Illustration: Niels Bohr Institute

“The so-called ‘Shockley-Queisser Limit’ for many years has been a landmark for solar cells efficiency among researchers, but now it seems that it may be increased.

“It’s exciting as a researcher to move the theoretical limits, as we know. Although it does not sound like much, that the limit is moved by only a few percent, it will have a major impact on the development of solar cells, exploitation of nanowire solar rays and perhaps the extraction of energy at international level. However, it will take some years years before production of solar cells consisting of nanowires becomes a reality,” says Peter Krogstrup who just completed his PhD at the Niels Bohr Institute, University of Copenhagen.

The research is conducted in collaboration with the Laboratory des Matériaux Semiconducteurs, Ecole Polytechnique Fédérale de Lausanne, the Foundation and the company SunFlake A / S. Their scientific findings work support results published in the journal Science in January. Here, a group of researchers from Lund, showed that the sun’s rays was sucked into the nanowires due to the high amount of power that their solar cell produced.

A researcher from America provides further corroboration.  “People are constantly trying to work around this limit, and there are a number of ways people are thinking of doing it,” says Jeremy Munday, a University of Maryland professor whose research also focuses on energy harvesting and photonics.

“They cause the light to bend and become concentrated in the nanowire,” Munday says.

His work has merited peer-review attention.  The University of Maryland reports, “A paper by Professor Jeremy N. Munday(ECE/IREAP), has been published in the Journal of Applied Physics produced by the American Institute of Physics. The paper, titled, ‘The effect of photonic bandgap materials on the Shockley-Queisser limit,’ received cover page placement. “

All these efforts sound a great deal alike and mirror a critical path being taken in solar cell development, perhaps one that will achieve the 15X solar cell just as others are seeking the 10X battery.