Charles F. Bolden, Jr., a retired U. S. Marine Corps Major General, astronaut and now NASA Administrator,  had enough adventures in any one of his careers to have made several who’s who lists.  The twelfth administrator of the National Aeronautics and Space Administration, his previous careers included 34-years in the Marine Corps during which he spent 14 years as a member of NASA’s Astronaut Office,  traveled to orbit four times on the space shuttle, deployed the Hubble Space Telescope, and flew on the first U. S.-Russian joint shuttle mission. 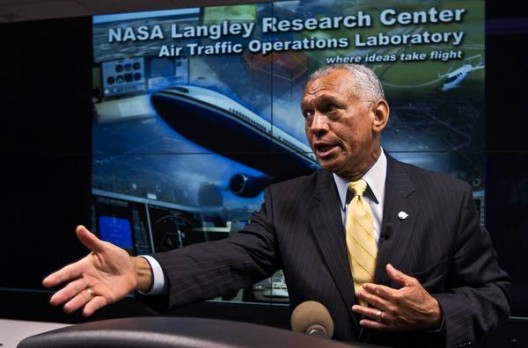 As a Marine fighter pilot, he flew over 100 combat missions during the Vietnam conflict; and during the first half of 1998, served as Commanding General of the 1st Marine Expeditionary Force Forward in support of Operation Desert Thunder in Kuwait.

According to his NASA biography, “Bolden’s many military decorations include the Defense Superior Service Medal and the Distinguished Flying Cross. He was inducted into the U.S. Astronaut Hall of Fame in May 2006.”

Bolden served, among other duties too numerous to list here, as the Commanding General of the 3rd Marine Aircraft Wing at Marine Corps Air Station Miramar in San Diego, California from 2000 until 2002 before retiring from the Corps in 2003.

He presented at the American Institute of Aeronautics and Astronautics meeting, Aviation 2013, in Los Angeles, California on August 14.  His keynote address, “Embracing a World of Change: NASA’s Aeronautics Research Strategy,” also embraced a good many of the technologies espoused by the CAFE Foundation.

Speaking before the gathering of the nation’s leading aviation engineers and managers, he noted the contribution that NASA-developed technologies have made to America’s aerial commerce.

“Nearly every aircraft flying and air traffic management system now in use includes NASA-supported technologies that improve efficiency and safety.  This new vision will expand on that by fully integrating into aviation advances in other industries and parts of the economy to meet the future demands for global mobility in ways we can only begin to imagine today.”

The Administrator outlined six efforts and technology that will help the next generation of aviation progress, including:

Apart from reducing the effects of sonic booms, CAFE has been working diligently on all areas Bolden explored in his talk.  Seated in the front row, CAFE President Dr. Brien Seeley was pleased when the Administrator alluded to the Green Flight Challenge and pointed to him.

This convergence in aims and goals shared by NASA and CAFE results from several years of cooperation between the two organizations, culminating in the GFC and leading to plans for future challenges which could lead to creating autonomous aerial commuter vehicles and pocket airports that would free space on America’s highways and reduce the turmoil of commercial air travel.  These are dreams worth pursuing, realizable with current technology, and seemingly closer to becoming an objective reality with support from our country’s leading aerospace organization.