What do JoeBen Bevirt and Benjamin Franklin have in common?  They both grew up without electricity and built kites to find it.

While being without electricity was the default condition in Franklin’s day, JoeBen was raised in a hippy commune in the Santa Cruz Mountains.  Neither man found the deprivations of his youth to be an impediment to creativity.

The phrase that keeps popping up in articles about JoeBen Bevirt, founder of Joby, inc. and Joby Energy, is “inveterate inventor.”  Inveterate has the sense of growing old in one’s habits, something unlikely to happen to a truly inventive soul such as JoeBen.  Deviser of a knobby-looking grip that can be fastened to almost anything, and which can hold cameras, lights, and other photographic gear, Bevirt has seen his Gorillapod become a huge success, and expand into Gorillamobile and Gorillatorch versions, hands-free flexible tripods to hold cell phones, flashlights, and other personal electronic devices.    Earlier, he designed robotic systems to aid in biopharmaceutical research labs.  As you would expect with a truly inventive soul, his new effort is in a new field with a new company, Joby Energy, exploring new technology.

Videos of his wind-gathering biplanes show a high tolerance for edgy thinking, and an amazing ability for his creations to levitate, rotate, and fly in limited confines.  These radio-controlled prototypes show the viability of flight with motorized systems that launch themselves using their motor power, gain altitude, then, tethered by their electricity-gathering cable, convert to kite-like flight, with the motors switching to generator mode to provide up to 5 megawatts of electricity.  An array of such kites, flying in a constant high-altitude wind, could supply up to half of the nation’s electrical needs, according to JoeBen.  Joby claims the wind-gathering system to be twice as effective as ground-bound wind turbines and to have a potential cost one-twentieth that of its terrestrial cousins.

Presenting this concept, which is being developed by several firms sharing this dream of using high-altitude winds for power generation, JoeBen showed the audience at EAS IV a related project, an eight-motor, vertical takeoff craft not unlike a personal V-22 Osprey.  As the airplane gains altitude, its wing tilts to allow the motors to provide increasingly forward momentum.  He’s aided by Greg Cole of Windward Performance in this, and the brief video seen at the Symposium showed a tail-less fuselage sharing Windward’s Sparrowhawk sailplane form, with a high-mounted wing carrying eight motors, very much like the multiple units on the kites.

Both the kites and the personal air vehicle use motors being developed by Diederik Marius, who echoes other motor builders’ concerns about creating adequate motor controllers.  “Our motor controller is fairly complex.  It needs to handle high electric current and voltage, needs to be lightweight and efficient both in motoring and generating mode,” he said. “It also needs to be highly reliable and robust, maintain optimal speeds and protect against overloads and faults.”  An example of a Joby motor was on display at EAS IV, about 3 kilograms (6.6 pounds) and capable of generating 10 kilowatts (13.4 horsepower), according to Jeff Young, a designer at Joby. 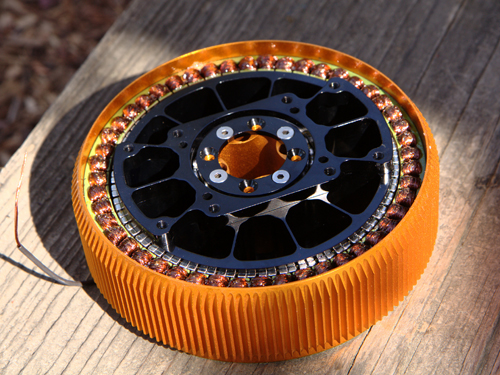 JoeBen’s Twitter page indicates that successful test flights have been made by a “Nymph” prototype, with development of a full-scale “Dragonfly” and on-line videos to follow.  We will follow this closely and bring blog readers the earliest possible viewing.