They report, “The Man Powered Aircraft Group of the Royal Aeronautical Society originated in 1959 when the members of the Man Powered Group of the College of Aeronautics at Cranfield were invited to become a group of the Society. Its title was changed from ‘Man’ to ‘Human’ in 1988 in recognition of the many successful flights by woman pilots.” 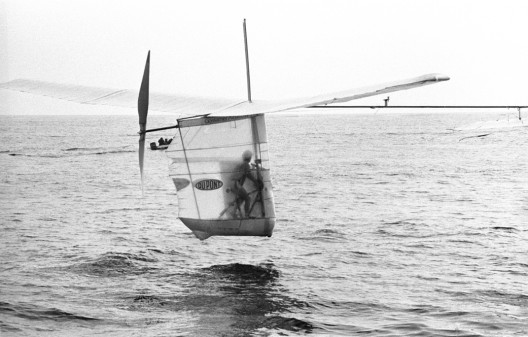 Mr. Henry Kremer turned the wistful dreams of many to serious competition by donating over 275,000 pounds sterling ($440,000 at today’s exchange rates) in prize money for achievements such as flying a figure eight around to markers a half-mile apart and starting and finishing 10 feet above the ground – won by Paul MacCready, the airplane’s designer and Brian Allen, the pilot.  The won their 50,000 pound prize on August 23, 1977, and scored a second win on June 12, 1979 by flying the Gossamer Albatross 22 miles across the English Channel.

The RAeS hopes to promote human-powered flight as “a Practical Sport For designers these machines offer a most exciting challenge.”   The group notes that “ultra lightweight materials have revolutionized techniques of construction, producing aircraft with a wingspan of around 25 meters (82 feet), and an all up weight of little over 30 kilograms (66 pounds).”

Earlier machines were built of spruce, balsa, and filmy fabrics, and were able to fly in only utterly still conditions because of their fragility.  But the RAeS believe that we have reached a transitional stage, with the next stage leading to “more practical aircraft, which can be built by a group of enthusiasts and flown as a sport.”  Although the slow flight and long wingspans require a refined and special type of piloting skill, “it has become less necessary for the pilot to be a highly trained athlete. Anyone is a potential HPA pilot. One of the ultimate aims of the Group is to promote human powered flight as an Olympic sport.”

Recently, Fred To, Dr. Bill Brooks, Chris Roper and Malcolm Whapshott formed the British Human Powered Flying Club “to advance the sport of flying HPAs.”  Fred To is Chairman of this group and Dr. Brooks is Chairman of the RAeS HPA group. 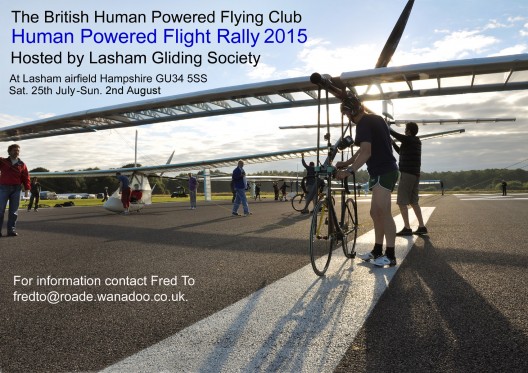 The RAeS sponsored the 2012 and 2013 Icarus Cup Rallies and the BHPFC staged a 2014 Rally at Lasham Airfield in Hampshire and are promoting their 2015 meet to again be held at Lasham from July 25 through August 2.

The rally this year included the following contests:

5) Distance around a triangular course.

Videos and images from the 2014 event suggest more of a cooperative and collegial event than a competitive one, but this is a sport that is just finding its way at this point.   One contestant suffered an embarrassing takeoff accident, but the simplified construction of modern HPAs allows relatively inexpensive and quick repairs to be made. 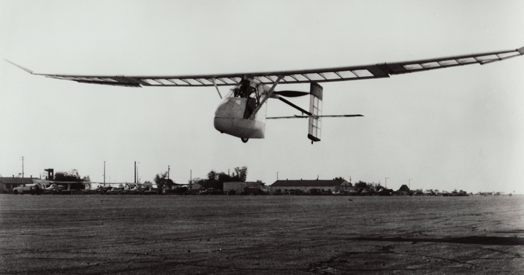 One of Kremer’s prizes included the use of auxiliary power, which came out in practice as help from small model airplane electric motors or even caged rubber bands which could be wound up by the pilot before a flight and unleashed for takeoff and initial climb.  With small motors being light and efficient, a combination of pedaling and auxiliary power, much like pedelec bicycles now becoming popular, could lead to an entirely new and exciting form of low-speed flight.   Modern, lightweight electronics could help integrating human and electric power, much like the “all-in-one” power systems for bikes that comprise motor, controller, and battery all in one compact package.  Control is often by Bluetooth-type links. 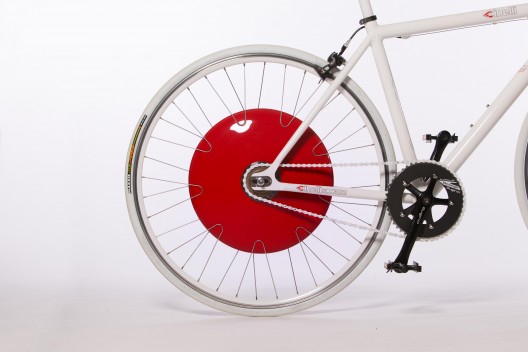 Copenhagen wheel, with motor, controller (complete with regenerative power), and batteries tucked inside

Because of their simplicity and light weight, construction can be fast and inexpensive.  Modern pultrusions and plastic films allow model-aircraft type structures, but with far greater strength than earlier HPAs.

Both the RAeS and the BHPFC have links to design tools that could help you have an entry ready to ship to England in time for the 2015 rally.  Caution: a friend exhausted himself trying to pedal Bryan Allen’s White Dwarf HPA blimp.  One entrant for the Kremer speed prize, a champion athlete, took three days to rest from a first, unsuccessful attempt.  A really clean, long-wing HPA will require at least 0.3 horsepower to stay aloft, and more than that to stay airborne.   Check your endurance riding a bicycle uphill before even thinking about this challenging realm of flight.