Scientists have been working on imitating nature’s ability to photosynthesize the sun’s energy, much as plants turn that energy into food for their health and growth.  Daniel Nocera, for instance, created an artificial leaf that split water into oxygen and hydrogen that could fire up a small fuel cell and run an electric light.  According to a Science Pub lecture your editor recently attended, an eight-ounce glass of water can power a 60-Watt bulb for 20 hours.  Nocera, in a Pop! Tech talk, claims an Olympic-size swimming pool could supply all the world’s energy needs.

Nocera now works at Harvard, but researchers at Massachusetts Institute of Technology (MIT), his former home, are taking his work further, detailing all the limitations that keep his “artificial leaf” from giving off more storable energy.

As explained in the MIT press release, “The original demonstration leaf, in 2011, had low efficiencies, converting less than 4.7 percent of sunlight into fuel… But the team’s new analysis shows that efficiencies of 16 percent or more should now be possible using single-bandgap semiconductors, such as crystalline silicon.”

MIT researchers were surprised at that output, formerly believing that silicon solar cells would be limited in their ability to split water.  MIT postdoctoral candidate Mark Winkler (now at IBM) explains, “You’ve just got to question the conventional wisdom sometimes.”

One limitation was the 0.7 Volt output of a standard solar cell.  Water-splitting needs more than 1.2 volts. Researchers think pairing multiple solar cells in series might generate the necessary Voltage, even with losses at cell interfaces.

The water itself resists the electrons’ travel, so researchers are looking at ways to lower that resistance; including reducing the distance the ions must travel through the water.

Cassandra Cox, a former MIT graduate student now at Harvard says, “The solution resistance is challenging,” but there are “some tricks” that might help to reduce that resistance, such as reducing the distance between the two sides of the reaction by using interleaved plates.

MIT associate professor of mechanical engineering Tonio Buonassisi thinks that the team’s simulations have opened the path to “determine the limits of efficiency” for such cells.   That limit is about 16 percent for silicon: about 18 percent for gallium arsenide cells. 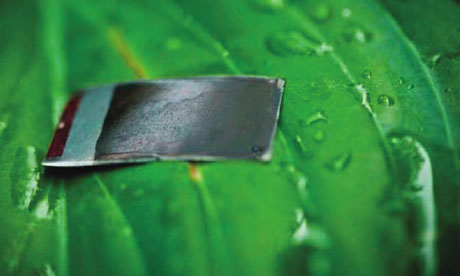 Such research gives credibility to Nocera’s claims of being able to distribute power to people who are far removed from the grid, and could eventually prove helpful in being able to generate commercial levels of hydrogen, with only potable water as a byproduct.  Low-cost material alternatives in such cells could help provide energy and water anywhere in the world, two necessities in short supply for the poorest among us.

The team’s findings were published in January in the Proceedings of the National Academy of Sciences of the United States of America under the title, “Modeling integrated photovoltaic–electrochemical devices using steady-state equivalent circuits.”

The work was supported by the National Science Foundation, the Air Force Office of Scientific Research, the Singapore National Research Foundation through the Singapore-MIT Alliance for Research and Technology, and the Chesonis Family Foundation.