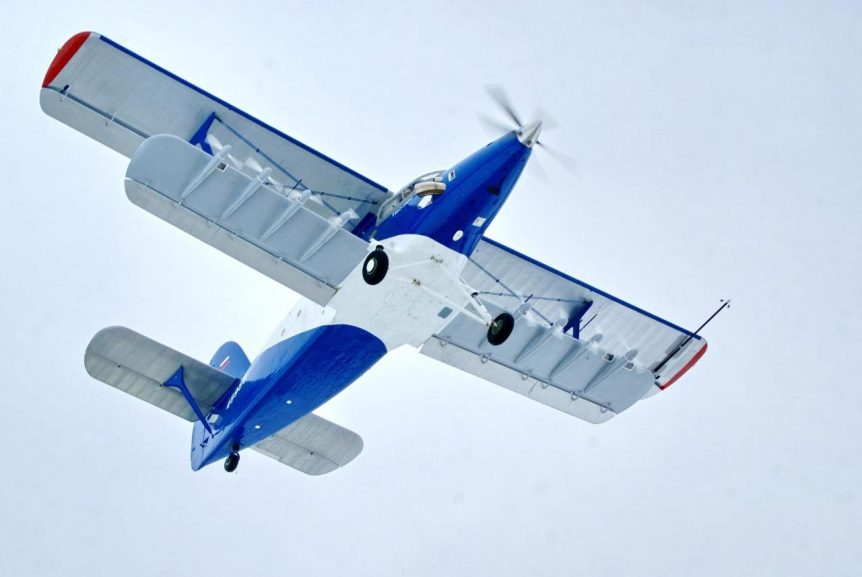 Sporting no less than nine powerplants, eight of which are electric, a cold-war biplane stunned the crowd at a Russian air show.  Part of the 15th International Aviation and Space Salon MAKS 2021 held on July 20-25, a Siberian adaptation of a Russian classic drew widespread attention.  Your editor has had the privilege of enjoying two flights in the original giant AN-2 biplane powered by a Schwezow ASch-62IR nine-cylinder radial engine with 1000 horsepower.  That engine sounded like a freight train grumbling through the valley over which we flew.  This new version has a 1,100 shaft horsepower Honeywell turbine in the nose and eight motors with folding propellers arrayed along the lower wing.  The sound is futuristic, while the airframe is anachronistic.

Electric-Flight.eu headlines its coverage with, “Russians impress with blown-lift technology on old double-deckers.”  Think of an imposing biplane standing almost 14 feet tall, carrying a total wing area of 71.52 square meters (769.8 square feet) and hauling 12 to 14 fully-armed troops into combat.  Despite its lumbering speed, this must have seemed like a good idea to Soviet military planners, since they had 18,000 built – roughly equivalent to B-24 production in WWII.

The electric motors arranged symmetrically under the leading edge of the lower wing blow across a wing area of only 14.24 square meters (153.28 square feet), but seem to make the five-second takeoff roll a non-event.  Along with a steep climb that would clear trees or other obstructions along a jungle clearing, the airplane would make a great search and rescue craft, or could carry large loads to remote sites.

Routesonline.com reports, “The Siberian Aeronautical Research Institute, named after S. A. Chaplygin (SibNIA), believes its TVS-2MS turboprop conversion of the classic Antonov An-2 piston airliner could prolong the life of the venerable aircraft into a ninth decade, with Africa a strong potential market for the modernized airplane.” 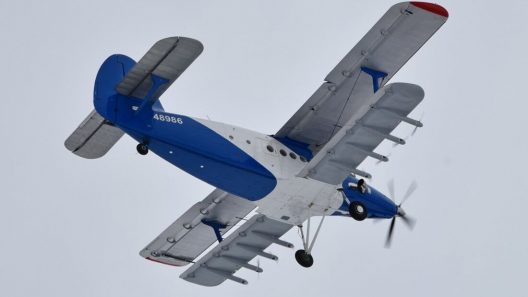 As with many Russian aircraft, Antonovs are hell for stout, and the leader at SibNIA knows that the plane is outstanding in its literal field.  “We often talk about point-to-point and regional to hub feed, but the SibNIA TVS-2MS truly offers a field to airport offer to the market and when we say field we do not just mean small rural airfields, it can freely operate from grass strips with its excellent short-field performance.”

Thinking at a more bucolic than urban level, the Institute’s designers see the big bird also levitating from rooftops, fulfilling a mission to perhaps alleviate ground traffic in Moscow and St. Petersburg.  This would require propping up roof beams, of course.

The TVS-2MS, stipulated to land and take off in the same area usually intended for the MI-8 helicopter (30 by 50 meters or 98 by 164 feet), is being followed by the TVS-2DT, a fully composite biplane.  It must clear a 15-meter obstruction at the edges of the “field,” which is not tidily defined. 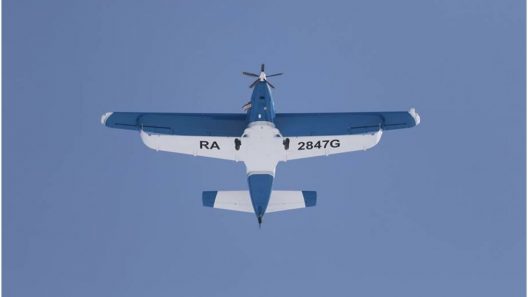 SIbniA has also crafted the TVS-2DT, an all composite, turboprop version of AN-2

The nine-motor monster will probably not be a production craft, but may presage further, sleeker developments.  An AN-3 lurks in the wings and several concepts await in a hazy future.