My daughter Ann sent me a video about an astonishing and novel use of materials – glass highways that interact with drivers and collect solar power.

Sharing this with Dr. Seeley caused him to share it with his sons, who had immediate feedback.  Damon Seeley is co-founder and partner with Cameron McNall in Electroland, a collaborative design firm that creates interactive displays involving light, sound, and a variety of media.  He thinks, “The idea is sound,” but shares some caveats based on his experience.  “I’m sure they have wildly optimistic cost projections of what it takes to produce and install these.  Also I now have 5 years’ experience with the extreme unpredictability of sandwich constructions under real-world shear loading from footsteps.  I can only imagine what a semi-trailer in ABS brake mode will impart to the surface.  They are going to need carbon nano-tube adhesives.”

Structurally, Corning may have part of the answer with its Gorilla glass, something invented in 1962 and in search of applications ever since.  Since 2008, though, it’s become “the protective layer over the screens of 40 million plus cell phones and other mobile devices,” according to Kentucky.com.  What Corning thought would bring $10 million sales per year turned into a $180 millon bonanza, with far larger sales when the material is applied as a protective layer over LCD and plasma flat-panel TV screens.  It may even be a gamer’s blessing, saving the fragile screens from loose Wii paddles.  Such a glass, tough as steel, could provide the structural strength necessary for roadways – or runways.

How much power could solar roads generate?  According to Scott Brusaw, the innovator behind Solar Roadways along with his wife Julie – a lot.

“In the 48 contiguous states alone, pavements and other impervious surfaces cover 112,610 square kilometers – an area nearly the size of Ohio-according to research published in the 15 June 2004 issue of Eos, the newsletter of the American Geophysical Union. Continuing development adds another quarter of a million acres each year.

“Let’s do some conversions: 112,610 square kilometers equals 43443.54 square miles. The report was done six years ago, so that means an additional 1.5 million acres have been turned into impervious surfaces. That’s an additional 2343.75 square miles, so all told, we have 45787.29 square miles of impervious surfaces. Let’s make a conservative assumption that a full 1/3 of that number accounts for rooftops of homes and businesses, which we’re not currently interested in. That leaves us with 28,962.36 square miles of roads, parking lots, driveways, playgrounds, bike paths, sidewalks, etc., to work with.”

Calculating potential output based on commercially available 18.5-percent efficient solar cells and only a conservative four hours of peak daylight per day, or 1,460 hours per year, Brusaw calculates the almost 29,000 square miles of roads in the country could generate over 20,000 billion kilowatt-hours of electricity per year, more than enough to supply the needs of the entire country.  Accounting for the fact that northerly locations will receive less sunlight than southerly ones, and deducting a loss of about 31 percent for the inability to angle roads to obtain optimum sunlight, he concludes the roads could provide 13.961 billion kilowatt-hours per year – over three times that needed for the entire country.

Brusaw notes that although there is no solid evidence that moon or starlight would add to the energy collected, headlights very well would, meaning that vehicles passing over these roads at night would help give back part of their energy.

With asphalt nearing $1,000 per ton, five times its price in 2007, solar roadways can be cost competitive, using materials from landfills as part of the structural underlayment and thereby redeeming land and garbage in a new and exciting way. 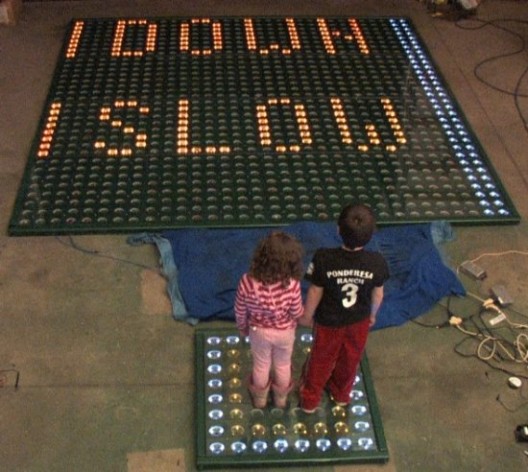 The interactivity that Damon Seeley designs into public buildings might be a safety blessing on highways, flashing warnings of objects, animals, or children on the road ahead.  Imagine this interactivity applied to a runway, with VASI (Visual Approach Slope Indictors) taking on a new dimension, or giving the runway the ability to shoo pesky birds or animals from its surface with lights and sound.  Ground control could augment oral instructions with illuminated arrows, text, and other graphics.

This is a challenging technology worth further investigation.  To that end the small non-profit firm received a big boost from General Electric.  “Out of 3795 ideas submitted to the GE Ecomagination Challenge, Solar Roadways earned the largest amount of public votes, qualifying as the winner of the $50,000 award!”