MGM COMPRO, a Czechoslovakian motor and electronics supplier, announced that they had participated in finally making the Phoenix motorglider an electric machine.  Jim Lee and co-pilot Jeff Shingleton had originally intended to fly the airplane at the Green Flight Challenge three years ago, but contented themselves with competing in the Rotax-powered machine and “only” winning third place in the event.  Their competing did elicit a great deal of interest in the machine, though.

MGM says, “We are very glad that we can present you a very successful project, [the] U-15 Phoenix of the Czech entrepreneur Martin Stepanek.  MGM COMPRO plays a decisive role in a development of industrial controllers for this fully electric aircraft. 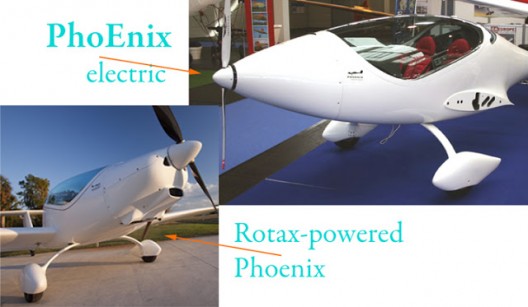 As described in the blog three years ago, the electric PhoEnix is a “nice airplane,” and one that would take many willing pilots on many cross-country jaunts.  Martin originally planned to use a Czech industrial motor for power, but ended up developing his own powerplant that would allow use of a controllable-pitch and feathering propeller.  He turned to MGM COMPRO for the motor controller, an industrial model HBC 280120, and uses two lithium-ion battery packs to give an hour’s endurance.

Martin and his team have planned a 6-day flight around the Czech Republic, cruising at about 120 kilometers per hour (74.4 mph) for an hour at a time.  Depending on reports, recharging can take one to 2.4 hours, so several hops could be accomplished in a day. 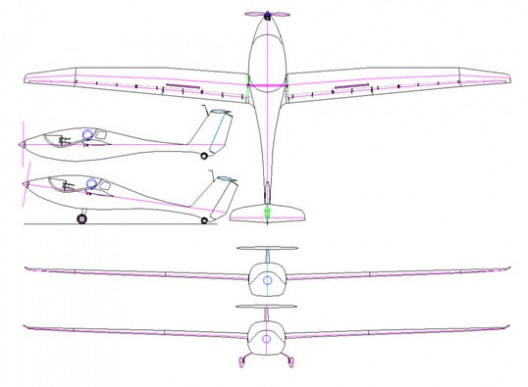 The two-seat motorglider has a wingspan of 14.5 meters (47.56 feet) and a length of 6.5 meters (21.32 feet).  Its empty weight of 300 kilograms (660 pounds) includes 34 kilograms (74.8 pounds) of batteries, not the 110 pounds reported for the round-Czechoslovakia trip.  Differing from the Rotax-powered version in having mid-fuselage-mounted wings rather than low wings and in seeming to have the retractable gear earlier planned, the sharp-nose vehicle shows several aerodynamic improvements that would allow it to take full advantage of its electric power.

Martin Stepanek is not new to all this, having worked on sailplanes during his mandatory army service in 1998 and 1999, and studying at the Aeronautical University in Brno (1993-1998). From 1999 to 2007 he worked at Urban Air on the Samba and Lambada ultralight motorgliders.   In 2008 he stared development of the Light Sport Aircraft, motorglider Phoenix and by 2009 was test flying  the machine.  By 2011, he was doing initial test flights of the electric version.

He showed the airplane at this year’s Aero Expo at Friedrichshafen and told reporters he was studying allowing the propeller to windmill in thermals to regenerate power for the batteries.  This should expand the range and endurance well beyond one hour, since Jim Lee has one video showing him flying 127 miles in the later afternoon without power in his demonstrator.

These types of aircraft are enormously adaptable, and with soaring capabilities can expand a pilot’s repertoire and skills.  It’s great to see this “new” airplane three years later.

NOTE: Please check out the comment from the airplane’s designer below for current information on the power system.