Imagine driving through the desert with sundown approaching and the gas gauge teetering on empty. Wherever you are when the car runs out of gas or the clock reads 5:00 pm, you spend the night. Competitors in the Challenger Class of this year’s Bridgestone World Solar Challenge had to face this challenge to their comfort and peace of mind every evening for five days. 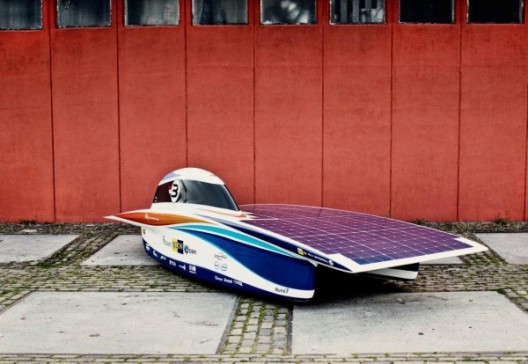 Organizers of this international competition note, “It’s all about energy management!  Based on the original notion that a 1000 Watt car would complete the journey in 50 hours, solar cars are allowed a nominal 5 kilowatt hours of stored energy, which is 10% of that theoretical figure.  All other energy must come from the sun or be recovered from the kinetic energy of the vehicle. 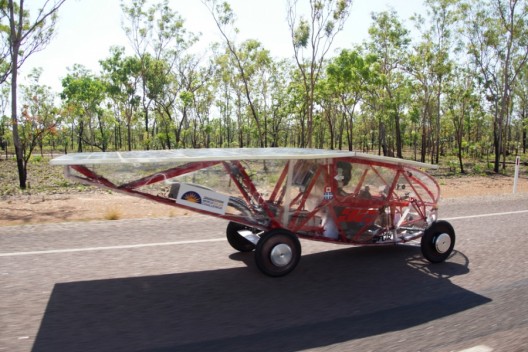 Clearly aerodynamic car from Ecole de Technologie Superieure. the Eclipse 8 was eclipsed by other teams, only managing the first day’s run

“The elite Challenger class is conducted in a single stage from Darwin to Adelaide. Once the teams have left Darwin they must travel as far as they can until 5 pm in the afternoon where they make camp in the desert where-ever they happen to be. Other classes have different requirements, but all teams must be fully self-sufficient and for all concerned it is a great adventure – many say the adventure of a lifetime.”

The cars, dubbed “aerodynamic masterpieces” by Challenge organizers, are like the solar-powered equivalent of Formula 1 racers on the public highways – purpose-built to win races, but probably not great for the daily commute. 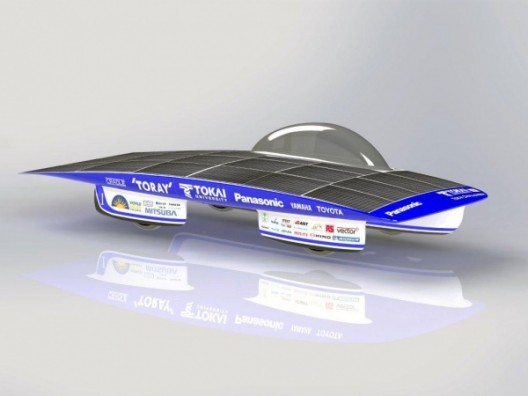 On their 3,000 kilometer trek from the north to the south of the continent, drivers of the 22 cars in this class faced seven mandatory checkpoints where new observers took over and each team could obtain updated weather and race information. Team members were allowed only basic maintenance such as checking tire pressures and removing debris from under the cars. Drivers might also stop for undisclosed check points where officials would check their car for “regulatory compliance.”

Two other classes, the Michelin Cruiser Class and the GoPro Adventure Class, have both practical and near-poetic ends. 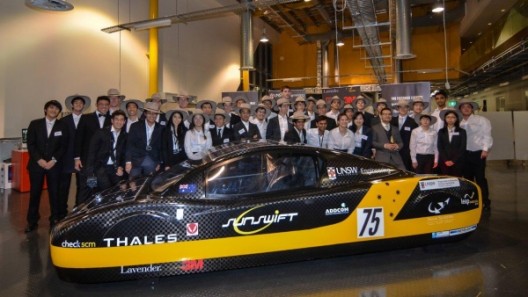 Inspired by the 2009 German entry Bio-Cruiser, the Cruiser Class seeks practical outcomes, with the four-wheeled cars carrying a driver and one passenger, both facing forward. These stopped at selected locations for overnight charging. Judged on energy consumption and “the subjective element of practicality,” all cars were expected to meet the requirements for registration as a road vehicle in their country of origin, showing that such vehicles could eventually become a part of regular traffic. 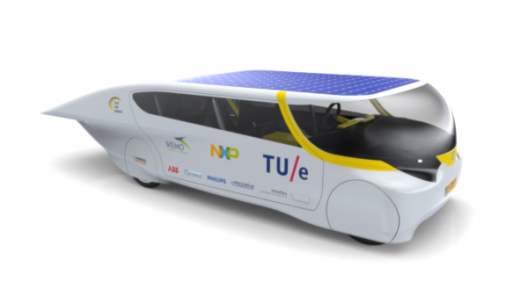 Eindhoven’s entry in Cruiser Class is a four seater

Sponsored by GoPro, which probably had thousands of its little cameras in every location possible, the Adventure Class allowed teams with “solar cars built for previous events to return, usually with new team members, for the adventure of crossing the continent on the silent power of nature.” The class was judged on “those who can work effectively with their available resources to achieve an outcome to the best of their capability,” and are therefore, “equally entitled to share the accolade as those who have won the greatest prize.”

Adventure vehicles were limited to three wheels, one driver, and a maximum length of five meters (16.4 feet), width of 1.8 meters (5.9 feet), and solar array area of six square meters (64.6 square feet). Their race was in two stages, not well-documented on the event’s web site unfortunately. 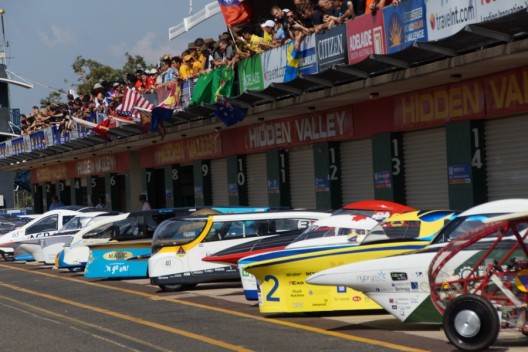 Of the 40 cars entered by 23 different nations, 19 made it over 2,000 kilometers (1,240 miles) and one, the Nuon Solar Team Nuna7 made it all the way, with several others flagging just a few kilometers short of the final goal. Many nudged the Aussie national speed limit in their runs, Nuna 7 doing over 90 kilometers per hour (55.8 mph) , showing that they could share the road with “real” cars and trucks.

Win, lose, or draw, all showed high degrees of originality and innovation, and each demonstrated a desire to bring clean, green transportation to a world in great need of its day in the sun.