Ohio State University researchers have come up with a two-in-one solar cell/battery combination that promises great efficiency and low costs.  What’s not to like?

Unfortunately for readers of the blog, it’s initially only a stationary system that will make energy storage a viable circumstance for large power plants, but it seems that the technology could be adapted to lighter, portable applications, such as electric vehicles. 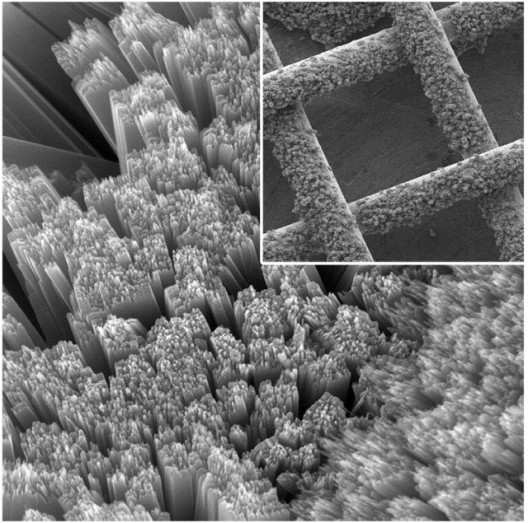 Ohio State is keeping somewhat mum about the patent-pending device, which they are developing as a commercial entity under the auspices of their spin-off, Kair (K for potassium, plus air and pronounced “care”).  We’ve heard a great deal about upcoming lithium-air batteries, but potassium-air is unique.  Even more unique, this battery stores energy from its own solar cell, the world’s first solar battery.

A mesh solar panel allows air to enter the battery, and a special process transfers “electrons between the solar panel and the battery electrode. Inside the device, light and oxygen enable different parts of the chemical reactions that charge the battery,” the University summarizes.  This hybrid could bring renewable energy costs down by 25 percent, according to Yiying Wu, professor of chemistry and biochemistry at Ohio State, who has overseen the solar battery’s development.

“The state of the art is to use a solar panel to capture the light, and then use a cheap battery to store the energy.  We’ve integrated both functions into one device. Any time you can do that, you reduce cost,” Wu says.  By eliminating the 20-percent loss of electricity that occurs when electrons flow between a solar cell and a battery, nearly 100 percent of the electrons are saved.

Wu worked previously with doctoral student Xiodo Run to create “a high-efficiency air-powered battery that discharges by chemically reacting potassium with oxygen.”  They won a $100,000 Clean Energy prize from the U. S. Department of Energy and have formed KAir Energy Systems, LLC to develop it.

The battery discharges when inhaling and charges when it exhales, but adding solar cells, normally made of solid semiconductor panels, would block air from entering the battery.

OSU explains, “Doctoral student Mingzhe Yu designed a permeable mesh solar panel from titanium gauze, a flexible fabric upon which he grew vertical rods of titanium dioxide like blades of grass. Air passes freely through the gauze while the rods capture sunlight.”

Normally, connecting a solar cell to a battery would require the use of four electrodes, the researchers explained. Their hybrid design uses only three.

OSU’s statement explains, “The mesh solar panel forms the first electrode. Beneath, the researchers placed a thin sheet of porous carbon (the second electrode) and a lithium plate (the third electrode). Between the electrodes, they sandwiched layers of electrolyte to carry electrons back and forth.”

Green Car Congress explains why this is important.  “The basic concept of the integrated solar battery is to use the contribution of the photovoltage to reduce greatly the charging overpotential caused by the difficulty in efficiently electrochemically decomposing lithium peroxide (Li2O2), the discharge product formed on the oxygen electrode. Overpotential otherwise causes low round-trip efficiency as well as degradation of the oxygen electrode and electrolyte. A paper on their work appears in the journal Nature Communications.”

OSU adds, “An iodide additive in the electrolyte acts as a ‘shuttle’ that carries electrons, and transports them between the battery electrode and the mesh solar panel. The use of the additive represents a distinct approach on improving the battery performance and efficiency, the team said.”

After several trials, researchers hit on a dye for their solar cell that would capture the appropriate wavelength of light.  They ended up with hematite – iron oxide, or rust as it’s more commonly known.  This seems to give longevity comparable to existing rechargeable batteries and is dirt cheap compared to the ruthenium compound it replaced.

With funding from the U. S. Department of Energy, the team is exploring new materials that might enhance the solar battery’s performance.

Mingzhe Yu, Xiaodi Ren, Lu Ma & Yiying Wu collaborated on a report concerning their findings.  Their paper, “Integrating a redox-coupled dye-sensitized photoelectrode into a lithium–oxygen battery for photoassisted charging,” can be found in the October 3, 2014 issue of the journal Nature Communications.