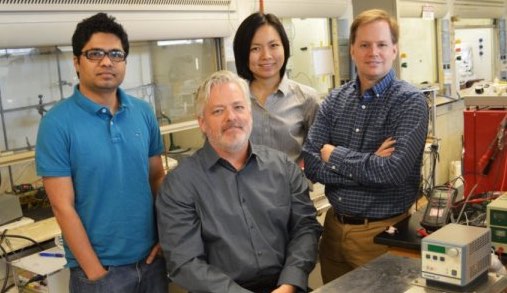 University of Texas at Arlington chemists and engineers have converted carbon dioxide and water directly into useable liquid hydrocarbon fuels – in one step.  The “simple and inexpensive new sustainable fuels technology” used concentrated sunlight, high pressure and heat to remove CO2 from the air and even revert oxygen back into the system.

Researchers demonstrated that a one-step conversion of carbon dioxide and water into liquid hydrocarbons and oxygen can be performed in a photothermochemical flow reactor operating at 180 to 200 degrees C and pressures up to six atmospheres. 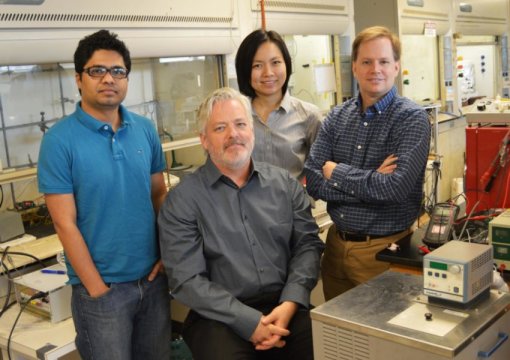 Brian Dennis, UTA professor of mechanical and aerospace engineering and co-principal investigator of the project, explains, “We are the first to use both light and heat to synthesize liquid hydrocarbons in a single stage reactor from carbon dioxide and water. Concentrated light drives the photochemical reaction, which generates high-energy intermediates and heat to drive thermochemical carbon-chain-forming reactions, thus producing hydrocarbons in a single-step process.”

Frederick MacDonnell, UTA’s interim chair of chemistry and biochemistry and co-principal investigator for the project expounds on the products of this single-step technique. “Our process also has an important advantage over battery or gaseous-hydrogen powered vehicle technologies as many of the hydrocarbon products from our reaction are exactly what we use in cars, trucks and planes, so there would be no need to change the current fuel distribution system.”

In an article published today in the Proceedings of the National Academy of Sciences titled “Solar photothermochemical alkane reverse combustion,” Duane Dimos, UTA vice president for research lauded the researchers and added a little PR for the school.  “Discovering a one-step process to generate renewable hydrocarbon fuels from carbon dioxide and water is a huge achievement. This work strengthens UTA’s reputation as a leading research institution in the area of Global Environmental Impact, as laid out in our Strategic Plan 2020.”

Looking at the limitations of the current experiment – the use of titanium dioxide as a catalyst, MacDonnell noted its limitation in not being able to absorb the entire visible light spectrum.

He adds, “Our next step is to develop a photo-catalyst better matched to the solar spectrum.  Then we could more effectively use the entire spectrum of incident light to work towards the overall goal of a sustainable solar liquid fuel.”

Further improvements would include the use of parabolic mirrors to concentrate sunlight on the catalyst bed, “providing both heat and photo-excitation for the reaction.  Excess heat could even be used to drive related operations for a solar fuels facility, including product separations and water purification.”  These enhancements and the possible side benefits make this an interesting path of study.

The research was supported by grants from the National Science Foundation and the Robert A. Welch Foundation. Wilaiwan Chanmanee, postdoctoral research associate in mechanical and aerospace engineering, and Mohammad Fakrul Islam, graduate research assistant and Ph.D. candidate in the department of Chemistry and Biochemistry at UTA, also participated in the project.

MacDonnell and Dennis have received more than $2.6 million in grants and corporate funding for sustainable energy projects over the last four years, including conversion of natural gas into high-grade diesel and jet fuel.  They developed that process in collaboration with an industrial partner in UTA’s Center for Renewable Energy and Science Technology, or CREST, lab, and are now working to commercialize the process.

According to UTA, “MacDonnell also has worked on developing new photocatalysts for hydrogen generation, with the goal of creating an artificial photosynthetic system which uses solar energy to split water molecules into hydrogen and oxygen. The hydrogen could then be used as a clean fuel.”