ONERA’s mission statement for its AMPERE (Avion à Motorisation réPartie Électrique de Recherche Expérimentale) electric aircraft is fairly straightforward.  “AMPERE is a demonstrator of a regional airplane with electric propulsion distributed, allowing to transport from 4 to 6 people over 500 [kilometers – 310 miles] in 2 hours.  The objective of the AMPERE project is to bring to maturity the technology of distributed electric propulsion in order to transfer it to the industry.”  ONERA, the Office National d’Etudes et de Recherches Aérospatiales (National Office for the Study and Research of Aerospace) is the French equivalent of NASA.

ONERA showed a one-fifth-scale model of AMPERE at the Paris Air Show last week, with spokesman and designer Jean Hermetz holding forth on the plane’s features.  Pardon that the video is in French, but the images are universal.  Note the wind tunnel tests at 1:45, showing attached flow over the wing segment on which the electric ducted fans are turning.

The idea has been floating around ONERA for some time, with a low-wing, motors-on-trailing-edge approach and the high-wing, motors on leading edge model shown at Paris.  ONERA promotes the following advantages for the latter configuration: 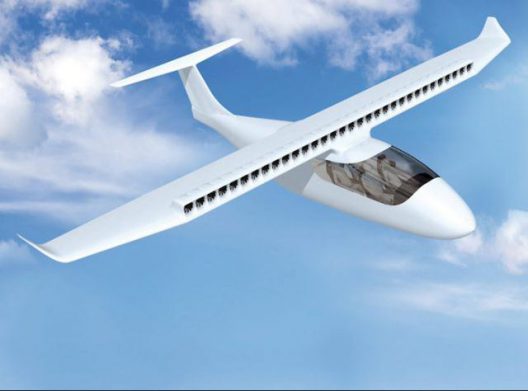 Wind tunnel tests at Lille, France, have verified the numerical design of the motor integration for distributed propulsion and its wing blowing effect.  It has also validated predicted aerodynamic performance calculations.  Jean Hermetz reports, “The first feedback is convincing: the expected level of performance is there.” 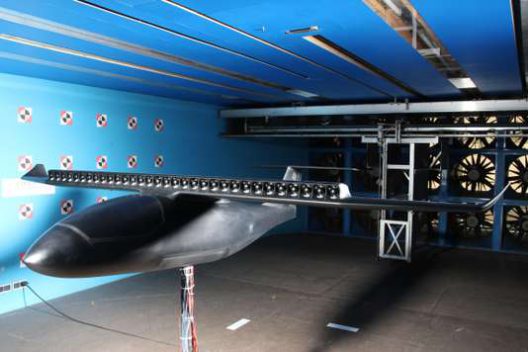 Power will come from fuel cells developed in partnership with Office of the Commissioner of Atomic and Renewable Energy.  Eight fuel cells provide power to the 32 motors, four motors per fuel cell.  Each motor, in turn, drives an electric ducted fan.  (This last pair of sentences was added on July 3 for clarity.  Thank you to Eric Raymond for the suggested change.)

A paper by Hermetz, Michael Ridel, and Carsten Döll explicates the technical challenges involved for energy storage.  “The different scenarios evaluated through the multi-disciplinary approach show that the Polymer Exchange Membrane hydrogen Fuel Cell (PEMFC) concept is the more promising solution for the considered TLAR (top level aircraft requirements) for providing the electric power (both for propulsion and systems), with the help of a battery pack for instantaneous power demands.” 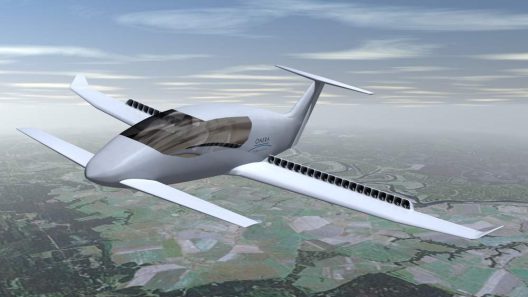 As batteries improve, the craft could grow from six seats to 50, and range will increase to be competitive with smaller Boeings and Airbuses.

Command and control will take place, “through the association of multi-motors and control surfaces,” according to ONERA’s designers.  The airplane’s modular architecture and in-flight reconfiguration capabilities will allow the overall electric propulsion system to fly with the least drag for and greatest response to control inputs.  ONERA has developed a digital flight simulator to enable future pilots to take advantage of the distributed thrust and to coordinate the motors and control surfaces in new ways.  Eventually, ONERA hopes to do away with control surfaces altogether, using differential thrust to manage all flight maneuvers.

With innovative ideas flooding the next generation of creative aerial solutions, we can all be buoyed by the prospects of many of these new concepts reaching commercial reality.