Eva Håkansson not only drives her Killajoule racing sidecar at hellacious speeds, but built it, wired the battery pack and now campaigns it with a five-person crew – including herself and her husband Bill Dube’.  Over the Labor Day weekend, she topped 240 mph in her little bullet.  Not content with only four miles per minute, she and Bill returned for even more speed on September 13.

Business Insider reported, “But Håkansson and Dube knew their creation could go even faster. So last week, they returned to the Bonneville and upped the ante even more by hitting a whopping 270.224 mph. ‘The computer model showed a possible maximum speed of ~270 mph,’ Håkansson wrote in her blog. ‘For the first time ever, practice agreed with theory. We were both pleasantly surprised. It doesn’t happen very often, for sure’”   Eva headlined the blog entry, “Now it’s starting to feel fast…” 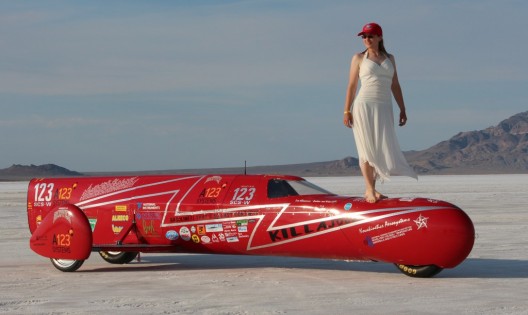 A123 supplied 14 Amp-hour pouch cells for the record attempts.  Eva reports, “They are _really_ stiff. We attribute the remarkable top speed to the low sag of these cells under load. We made greater than 700 Amp (25 C) looong pulls from the 2P[arallel] pack which resulted in less than 10 Celsius temperature rise.”  Pulling 25 times the rated charge/discharge rate for the cells is the kind of extreme demand that model aircraft pilots ask of their battery packs in aerobatics competitions.

The battery pack consists of four modules of 56 cells each – two in parallel, 28 in series weighing 300 pounds and producing 375 Volts while storing 10 kilowatt hours of energy.  The four modules have enough energy for one run at full tilt, and all four modules are swapped at the end of the run so the fresh pack can power Killajoule for the return run.  Batteries are recharged with a 12 kilowatt Manzanita Micro charger running on bio-diesel fuel, making the operation as green as possible. 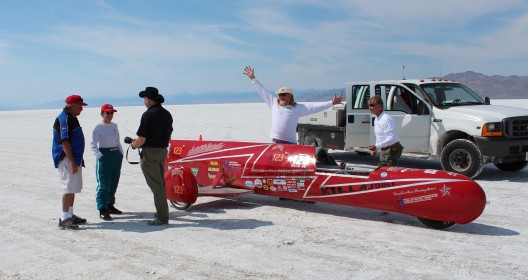 Eva and Bill are quite happy with all the equipment on the vehicle.  Everything performed flawlessly during the runs, including the 500 horsepower EVO motor and dual Rinehart controllers.  Eva notes that the internal combustion powered machines around them “had small armies for support teams,” while their five-person team merely cleaned the salt from the exterior of the vehicle, swapped batteries and refilled the ice in the cooling system for each run.

Eva and Bill are retiring the bike for the season, reasoning that the extra 10 percent of available power will not result in a notable increase in speed, power required increasing by the cube of the speed.  Instead, they anticipate returning to the salt flats next year with a well-calculated campaign to hit at least 300 mph (300 being such a nice, round number according to Eva).  We can only wish them continued safe running and ever-better adventures.