Open source development is a paradigm shift in the way of doing business for many new enterprises, doing away with corporate security and patents to promote the free exchange of information and ideas.  One of the latest efforts, for creating jet biofuel, has senior students at Embry-Riddle Aeronautical University in Prescott, Arizona inviting “the participation of students and academics from universities around the world,” according to Green Air Online.  Companies who could benefit from products such as renewable jet fuel are also invited to join.

Much of the work will be based on adding value to the biodiesel transesterification reactor invented by University of Connecticut professor Dr. Richard Parnas.  His small, efficient, and inexpensive process converts waste vegetable oil (WVO) and other biomass, including hemp, into biodiesel or jet fuel.

Transesterification, grossly oversimplified, involves exchanging parts of a chemical called an ester with parts of an alcohol. These exchanges can produce new materials such as polyesters and biofuels.

Dr. Parnas assumed and has carried on the earlier efforts of a UConn chemistry professor who worked with students on a demonstration project to convert waste cooking oil from the school’s campus dining halls into biodiesel – which was then used to power school vehicles.  Expanding from the original six gallon demonstration, the school now has a Biofuel Consortium headed by Dr. Parnas, and he has “expanded dramatically” the original small scale cooking oil conversion. 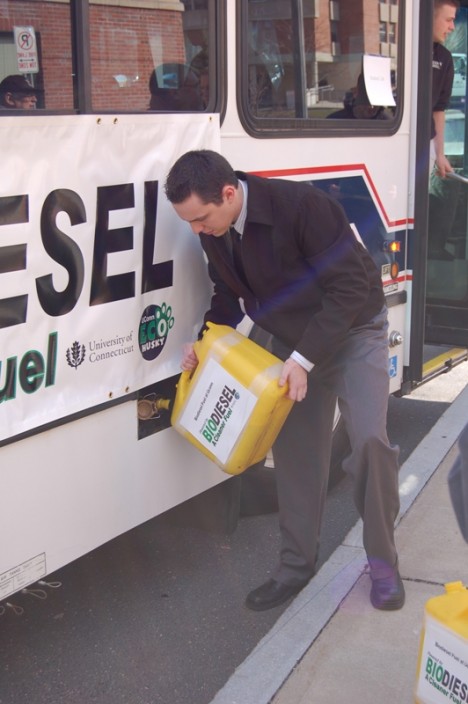 “’Richard has done an impressive job in moving biofuels at UConn farther than many of us thought possible when this began as a small laboratory feasibility study,’ said Dr. Joseph Helble (Dr. Parnas’ predecessor and now Dean at Dartmouth’s Thayer School of Engineering). ‘His ability to develop the processing technology, secure funding, build coalitions across campus and with state leaders, and establish UConn as the focal point for Connecticut efforts to develop a biofuels industry is remarkable. It is his efforts that are largely responsible for UConn becoming a leader in this field.’”

UConn’s student union restaurant and food court reportedly produce an estimated 1,770 pounds weekly of waste vegetable oil, including soybean trans-fat-free frying oil, canola oil, olive oil blends, and extra virgin olive oil. Dr. Parnas’ transesterification process helps convert that into 50 gallons of biodiesel each week.  This fuel then goes into the school’s buses, where it is mixed with regular Diesel fuel in a 20-percent biofuel blend (B20). According to the school, “The Consortium projects that if all campus buses ran on B-20 in the future, CO2 emissions could be reduced by 15 percent.”

The project’s co-sponsor, DoctorBioDiesel, is a local biodiesel fuel additive company.  Other cosponsors include media and Internet associates.

Embry-Riddle, by allying itself with UConn and Dr. Parnas’ efforts, achieves one of the goals of a modern aviation and aerospace leader in higher education.  “Graduating Embry-Riddle students will be expected to be ‘green conscious’ anywhere they go in their chosen aeronautical careers,” said Jeffery DeMarco, Chief Information Officer of DoctorBioDiesel. “The best aeronautical companies covet green application experience and renewable fuels are at the bleeding edge.”

A well-connected campus, presumably linked to UConn effort, will enable classroom lectures, demonstrations and production of biofuels to be “live broadcast, recorded and posted for any student to follow. Computer modelling will be on the ERAU server so that any student can apply for a login account to follow, CAD re-design and ‘virtually’ test their own individual theories about improvements to the reactor. Experts in the field are invited to Skype guest lectures on the project and aeronautical companies are encouraged to join and mentor the students. The project, which started in January, is a two-semester, one-year curriculum.”

Dr. Parnas will give a February 21 online lecture at ERAU Prescott on extending the transesterification process from a biodiesel finished product to jet fuel.  Parnas says, “We can make straight chain alkanes in the carbon number range of jet fuel directly from biodiesel. This has been done at small scale in standard chemical engineering processes that can scale easily to very large applications. The process does not use any catalysts but rather relies on a carefully designed balance of kinetics and thermodynamics. Thus the process is very inexpensive, robust and reliable.”

For more information on the project, contact Jeffery DeMarco or Skype doctorbiodiesel.