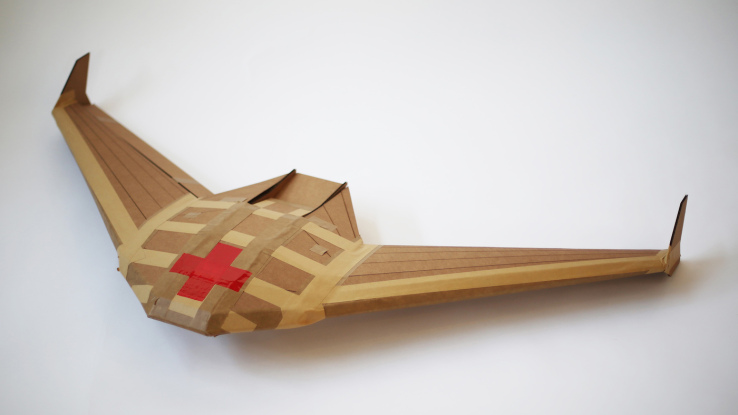 A disposable drone that will make a one-way trip to a disaster area won’t add to the suffering if it dissolves within a few weeks of delivering its life-saving cargo.  That’s the promise of the “Aerial Platform Supporting Autonomous Resupply Actions” (APSARA), currently being developed by Otherlab, a San Francisco-based group specializing in next-generation creations.  Funded by DARPA (the Defense Advanced Research Projects Agency), APSARA is part of their ICARUS program (Inbound, Controlled, Air-Releasable, Unrecoverable Systems).  The acronyms are becoming overwhelming.

Disposable medical supplies are a commonplace in today’s clinics and hospitals.  A recent chat with a nurse elicited her concern that medical supplies were so readily disposable.  Latex or nitrile gloves, single-use syringes, and protective paper covers and wraps make up a considerable amount of medical waste each year.  The materials have the benefit of being inexpensive, though.  That’s part of the thinking behind APSARA.  Instead of a costly powered drone that would represent a significant loss if it crashed in a jungle or desert, APSARA will be made of cheap cardboard, shipped flat to a point of intended use, and readily folded into a flying wing that can carry up to two pounds of life-saving medicine or gear.  And instead of being incinerated like all those latex gloves, the drone will degrade into the landscape and even, possibly, fertilize the native plants.

Star Simpson, in a Digital Trends interview, explained the reasonable expectations for the technology she is helping develop.  “There are two use cases that make the most sense: delivering humanitarian payloads to remote areas lacking suitable road infrastructure, or in cases where it’s worth minimizing human exposure, transporting blood, vaccines, and other medical supplies.  Alternately, [these vehicles] may also enable the delivery of other equipment, such as batteries, to specific locations. We enable distributed delivery with precise landings, solving the ‘last leg’ problem for battlefield or low-infrastructure locations, and also reduce supply chain vulnerability in those cases.”

The cardboard will readily dissolve into the surrounding terrain, but what about the electronics that help guide the flying pizza box to its destination?  An earlier DARPA program, Vanishing Programmable Resources (VAPR), was “intended to create self-destructing electronic devices able to stop high-tech military equipment falling into enemy hands.”  Electronics on Otherlab’s drone might include GPS guidance units and flap actuators. 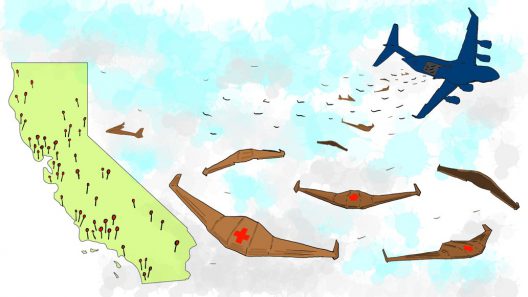 Otherlab drones could drop from large cargo planes, cover an area the size of California

Unlike powered drones with limited range, Otherlab’s concept could be widely dispersed from large craft such as C-17s or C-130s, ostensibly covering an area the size of California with targeted deliveries.