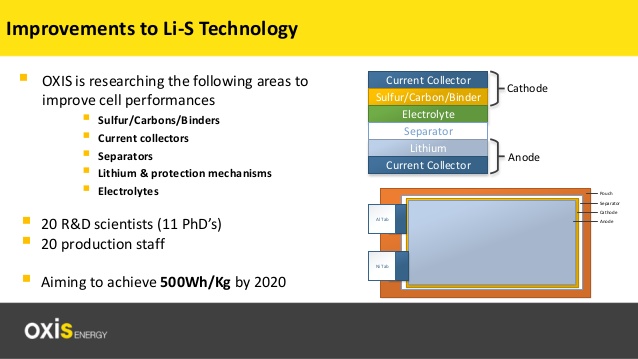 While we wait yet another five years for commercial development of each newly announced but promising battery chemistry, one company has its cells ready to fly in Bye Aerospace’s eFlyer 2 and in Texas Aircraft’s Colt S-LSA.  Oxis Energy has managed to leapfrog lithium-ion makers with its lithium-sulfur battery packs packing 400 Watt-hours per kilogram.  Considering the best announced pack-level li-ion performance has been 260 W-hr/kg, the leap is significant.

Batteries, for now, are at the heart of electric aircraft.  Until Doc Brown’s Flux Capacitor or a hydrogen fuel cell with Dollar Tree refills comes along, batteries are battling it out for our airborne dollars.  Lithium-ion remains in the forefront, with Tesla staging its shareholders’ meeting and its long-anticipated “Battery Day” on September 22.  Elon Musk has been dangling the promise of a million-mile battery for the last year, which may tie in with Chinese manufacturer Contemporary Amperex Technology (CATL).   According to Bloomberg, CATL’s, “Chairman and founder Zeng Yuqun said the company is ready with a battery pack that’ll last 1.2 million miles before needing to be replaced.”  Ostensibly, Tesla is a customer.

Discounting the lack of performance data and despite a ten-percent price differential over existing Li-ion cells, CATL’s batteries may be good investments for the long haul.  Most electric vehicles currently come with an eight-year, 120,000-mile warranty, so ten percent more for 10 times the mileage and a potential eighty years’ usage is a bargain.  (Your batteries will outlast you and your parrot.)

Longevity has been a big issue with lithium-sulfur so far.  Mark Crittenden, head of battery development and integration at Oxis Energy, explains that lithium-sulfur cells tend to degrade in a different way than lithium-ion cells, described concisely in his IEEE Spectrum article.

The Oxis Energy Technology page indicates a cell life of 250 charge/discharge cycles (the company hopes to double this to 500 cycles “within the next two years.”  Even given the low number, the average light aircraft in this country flies only about 80 hours per year (a terrible utilization rate) and the average light aircraft pilot flies only 40-80 hours.  Even business craft average only about 30 hours per quarter.  This would give about three years’ use at 250 cycles or six years at 500.  If as claimed Oxis batteries are substantially less expensive than Li-ion equivalents, this may be to their advantage.

Oxis demonstrates their batteries’ ability to take bullets and nail punctures while remaining fully active and not bursting into flames – something with which Li-ion cells don’t fare so well.

Their environmental friendliness comes from their being made of sulfur rather than cobalt and nickel.  Lithium-sulfur cells are claimed by Oxis to be more easily recycled, a major problem for Li-ion cells, which are blamed for major recycling center fires.  Cobalt also bears the burden of being a conflict mineral, extracted in places like The Congo using child and slave labor.

Sulfur is far more abundant and not subject to battles for ownership.  Tenth most common element in the universe and fifth most common on earth, sulfur is found everywhere and has played a part through the history of materials development.

Oxis cells are being incorporated in the design of two new craft coming to market soon.  Bye Aerospace, which previously had lithium-ion packs capable of 260 Whr/kg will now have Oxis packs that promise 400 Whr/kg to begin, 470 recently demonstrated and 500 “within a year.”  Oxis hopes for 600 Whr/kg by 2025.

Bye and Texas Aircraft will power their craft with electric motors.  “The all-composite eFlyer 2 is powered by a 120hp (90kW) Rolls-Royce RRP70D electric motor coupled to a 750V battery system. It delivers speeds of over 135 knots (250km/h or 155 mph) and has an endurance of over 3 [hours],” according to Flight Global.  The craft was designed from the start to be electrically powered.

Texas Aircraft’s Colt was introduced at  AirVenture 2019 as a Light Sport Aircraft with the ubiquitous Rotax four-cylinder engine.  It was also shown with a Siemens SP-55D producing 72 kilowatts (96.5 horsepower) AT 3,000 rpm.  Siemens electric aircraft division was purchased by Roll-Royce, so the Bye eFlyer2 and the Colt will share the same motor heritage and similar powerplants.

One can make a reasonable guess as to whether the Rotax or electric version of the Colt is an approximation of the other.  The Rotax engine weighs around 135 pounds and the R-R motor about 62 pounds.  The gas version carries 31.7 gallons of fuel – about 192.5 pounds.  The electric version’s 90 kilowatt-hour battery pack will weigh about 225 kilograms, or 495 pounds.

495 pounds of batteries minus the 192.5 fuel weight gives 302.5 pound difference.  Discount the electric motor weight vs. the gas engine and that gives up 73 pounds, ending up with a roughly 230 pound penalty for the electric Colt.  We have seen, though, that electric motor torque might be an equalizing performance factor, although this editor needs more study on the matter.

Texas Aircraft and Pipistrel will have electric and gas versions of three different models (the Alpha and Velis for Pipistrel).  These craft should provide excellent points of comparison.

Oxis sees its batteries as plausible in ground, air, and unmanned aerial vehicle applications, and others having experimented with lithium-sulfur have demonstrated reliable use.

Oxis has a 2018 brochure on line, extolling the virtues of their product.  One promise is eye-opening, comma splice and all.  “OXIS will be instrumental in moving the aviation sector away from lead-based fuel, the objective is to extend flight time eight fold by 2025, without increasing the weight of the aircraft.”