Taking one last look at 2011’s fifth annual Electric Aircraft Symposium, your editor regrets the fits and starts in its coverage. Next week, we’ll begin looking at the extraordinary presentations from this year’s gathering.

Huw W. Hampton-Jones from Oxis Energy, a British company developing a Lithium Sulfur battery, claimed his firm’s “technology is based around the use of Lithium Sulphur to produce batteries which are superior in terms of energy, weight, cycle life, costs, ageing and safety.”

Lithium sulfur is well known in military circles for providing primary (non-rechargeable) power to field operations.  Perlan I flew with SAFT 5590 primary batteries, partly because of their superior energy density compared to lithium-ion cells, and partly because of their greater resistance to thermal runaways, or self-igniting fires sometimes seen in lithium batteries. Weight was a significant concern on this high-altitude craft.

When working on the fringes of the battery selection effort for Perlan II, headed by Einar Enevoldson, James Murray and Eric Greenwell, this editor came to the conclusion that the same Li-S cells used five years before were still the lightest available. This was a bit disheartening, and illustrates the slow development that counters the high expectations EV enthusiasts share.

Mr. Hampton-Jones cautioned in his presentation that, “If the incidence of lithium cell-phone and laptop fires were applied to the larger pack for EVs, 1 out of 70,000 cars would explode.” That’s a daunting number and not very good odds. Luckily, car makers take steps to isolate individual cells, monitor and control things, and keep batteries from getting overcharged or over-taxed. Still, overall evidence is that despite two different types of highly flammable electrodes on board, the Lithium Sulfur battery is at least statistically less likely to self-ignite.

According to Hampton-Jones, Oxis’ Lithium Sulfur battery also, compared to Lithium-ion units, costs less – about 30 cents per Watt-hour and stores more energy – around 350 Watt-hours per kilogram. Lithium cells cost from 80 cents to $1.00 per W/hr and hold around 200 Whr/kg.

Oxis works with a number of partners to manufacture and assemble the various components in the batteries, and is integrating their use into a variety of applications. INDUCT, for instance, is a car maker using Oxis batteries.

Li-S batteries will power INDUCT’s Modulgo, described as a “four-wheel cell phone,” designed for the French car-sharing market. It will travel 100 kilometers (62 miles) on a single charge and can reach a top speed of 100 kilometers per hour (68 mph). We hope that one of the two passengers, and not the driver, take advantage of the little city car’s communication capabilities, which would allow accessing the following:

This may be the type of car the Facebook generation finds more desirable than one that goes fast and corners well.  There are even hints of inductive charging, which would recharge batteries through induced energy from metal plates under the cars in the extremely small parking areas such vehicles require.

In the meantime, Oxis batteries will need to work on their development schedule.  Their 350 W-hrs will need to grow to their projected 450 to handle the uploading and downloading that will doubtless take place in such a vehicle. As of last fall, the cells could demonstrate a cycle life of about 350 charge/discharge cycles, with 1,000 as a goal.

On the plus side, 70-percent of the machinery used to manufacture today’s batteries can be used to make the Oxis product and overall costs will be lower. Ultimately, if Oxis can meet its theoretical maximum of 2,700 w-hr/kg, that 5X to 10X battery of the future could become a reality. 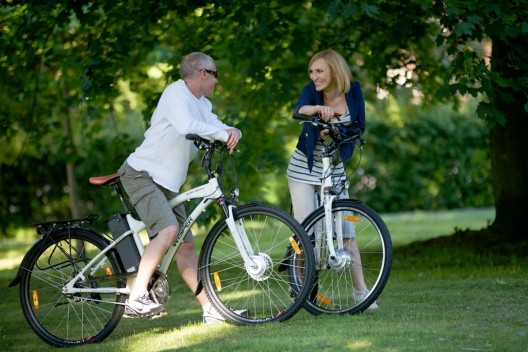 Oxis has plans for full production by 2014/2015, with inroads into two- and four-wheel vehicles, aviation, energy storage, and defense.