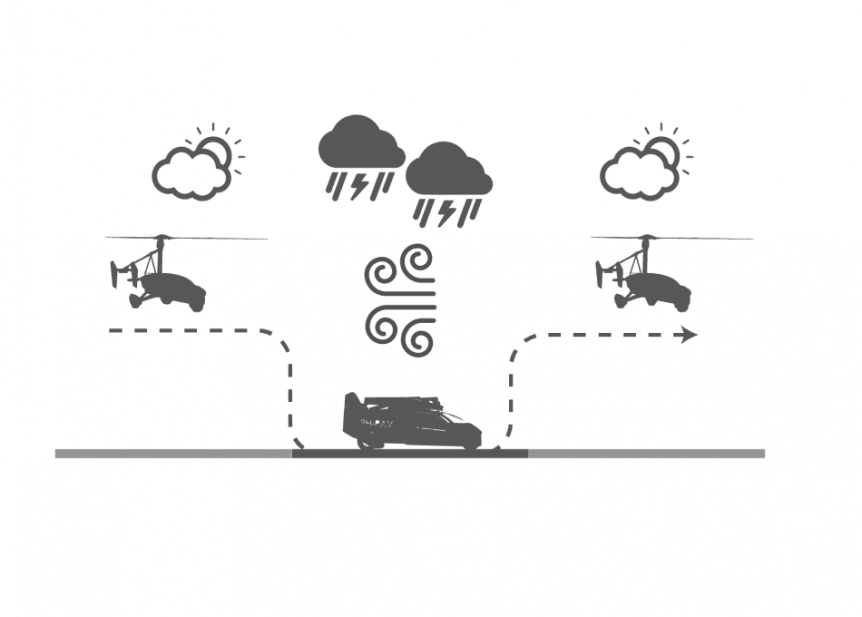 Pal-V is a “flying car” that looks more like a flying motorcycle.  Its three wheels would make it so in many countries.  It flies as a gyrocopter, maintaining a sporty approach to its transition from ground to air.  One reader has suggested dropping the term, “flying car,” even though it has captured reporters’ (and America’s) imaginations for the last hundred years.

The Dutch creation, under development for close to a decade, looks like a plausible contender for an all-purpose transportation device.  Its compact dimensions mimic a car on the ground, and its clever unfolding to become a gyrocopter allows quick and apparently easy transition from one mode to another.  The company calls the total experience, “FlyDriving.”

In “car” mode, its rear suspension geometry allows leaning into the corners with “Dynamic Curve Stabilizer” control, very much like a motorcycle.  The closed two-seat cabin is considerably less raucous, though, than open-air motorcycling.  In aircraft mode, its 87 mph cruising speed is not significantly different from a 1940’s Taylorcraft or Cub, but that’s good enough to overcome gridlock

World-wide, driving is becoming a frustrating series of stops and starts that belie the idea of “the open road.”  According to CityLab.com, “This year, according to Transport for London, London cars are driving at an average of just 16.5 miles per hour, falling to 7.4 miles per hour in the city core.”  This equals the speed of horse-drawn traffic in 1895 London.  EcoWatch cites Scientific American’s Tali Trigg that biking beats driving in many major American cities.  Austin, Texas commuters can expect to hit 6 mph in rush hour, and Los Angeles drivers might see 8 mph.  New Delhi, India seems to have a record, with traffic more congealed than flowing at 3.1 mph – average walking speed.  87 mph will really seem like flying.

Your Time has to be Worth It

The PAL-V Liberty Edition has a base price tag of $399,000 without options.  Those wanting greater exclusivity (in case a neighbor also buys one) can purchase the Pioneer Edition at $599,000, “”Including a unique interior and exterior finishing. It has a level of personalization reserved for Pioneer Edition owners only.”  For those desiring even greater personalization, extra-cost adders are available as desired.

PAL-V offers its users the opportunity to switch back and forth between ground and aerial use, with transitions taking just minutes.  Molt Taylor had the same functionality in mind in the 1950’s, but his Aerocar required a fairly laborious and time-consuming interval to make the switch.  It also required a trailer (and additional license) to haul the wings and tail cone.  PAL-V is self-contained in either form – a highlight of the cleverness involved.

The company claims the aircraft is stall-proof, and includes, “Our Human Error Proactive Counteraction (HEPC) methodology. With HEPC we addressed most of the human errors known for gyroplanes, and made those errors hard or impossible to make.”

Claiming to be the first commercially available certified “flying car,” PAL-V, “meets all the legal standards of the European Aviation Safety Agency and the Federal Aviation Administration (USA) for flight and the local road standards for driving.”  Delivery included familiarization and early flight training, with follow-up in the customer’s favorite “scenic locations.”

Being first in the certified market will test the waters for others following.  Obviously marketed at the truly upwardly mobile, the PAL-V will be interesting to watch.