Dr. Birgit Weißenbach, press and marketing director for the firm, announces that PC-Aero and Calin Gologan will appear at the ILA (Internationale Luft- und Raumfahrtausstellung, or International Aerospace Exhibition) Berlin Air Show being held between September 11 and 16 at Roger Airfield, about 11 miles southeast of the city. They will be showing, for the first time, their operational Electric Flight System, comprising their electric and solar-powered Elektra One Solar aircraft and a mobile solar charging station, the trailer in which the motorglider can be transported. 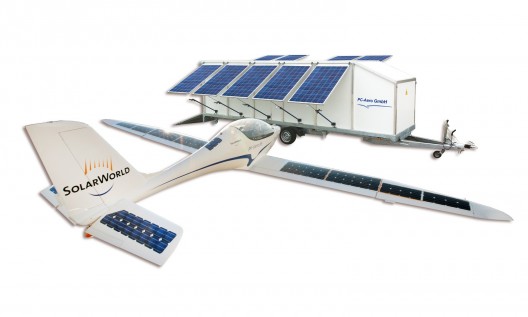 Elektra One Solar with solar trailer - transportation plus power

Dr. Weißenbach notes that “At the Aero in Friedrichshafen/Germany this year we presented only a mock-up of the Elektra One Solar (Editor’s Note: as they did at AirVenture 2011, showing only stuck on, but not connected solar cells on the shorter Elektra One wing).” The ILA will see the debut of the aircraft with greater span, higher aspect ratio, and a laminar airfoil.

Calin Gologan explains, “We do not have to wait for new technologies, we need only to integrate current components (lightweight structures with high-quality aerodynamics, light and modern electric motors and batteries) in an optimized system. Our Elektra One is such a modern single-seat Ultralight Electric Aircraft in composite construction. With the Elektra One and the existing technology it is possible to fly electric without CO2-emission and without noise for over three hours. In addition, in comparison to a classic aircraft, the operating costs are much lower.”  With the Elektra One Solar, the range and endurance are even greater.

Solar World solar cells on the 11-meter (36-feet) wings will provide a greatly enhanced endurance of eight hours, good for 1,120 kilometers (694 miles) with no reserve left in the airplane’s batteries. Round that to 600 miles with a healthy reserve of over an hour’s flying time and the long-range cruise is better than most ultralights now flying.  The spreadsheet also shows that the airplane would be cruising on the equivalent of 398.15 miles per gallon at its best gliding speed of 63 mph.  Its flat plate frontal area is close to only one square foot, demonstrating its designer’s acumen. 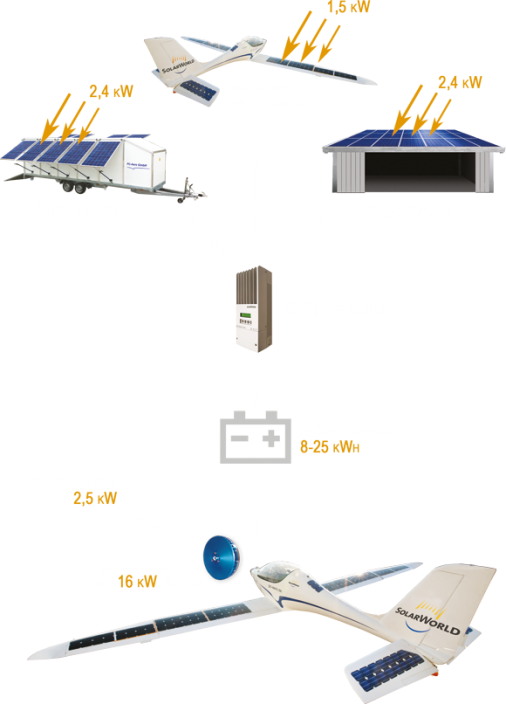 The little motorglider is a marvel of structural design, the all-carbon fiber craft weighing only 100 kilograms (220 pounds) empty, including motor, controller, folding propeller and retractable landing gear. Batteries add up to 100 more kilograms and the airplane can carry a 100 kilogram payload (small pilot with an overnight bag – big pilot and a toothbrush). A 8.6 square meters (92.6 square feet) wing  and 14.7:1 aspect ratio make for an efficient 30:1 lift-to-drag ratio and the ability to maintain level flight on 2.5 kilowatts (3.35 horsepower), according to the company.

Stated performance is backed up by Howard Handelman, who has provided thoughtful approaches to measuring aircraft economy with his triangle tool.  His “new and improved” unique spreadsheet shows the airplane would require 2.76 kW for maximum distance and that “For 1,000 kilometers you thus need 9.86 hours which is a minimum of 27.2 kW-hr.”  Only a quarter kilowatt separates manufacturer’s claims from Handelman’s calculations, which would seem to verify the claims.

Gologan will speak at the 4th International Conference on Reducing the Environmental Impact of Future Air Transport on September 13 in the ILA Conference Center, Halle 5, Raum Romeo (the Romeo Room), from 4 to 6 p. m. His talk is titled, “Elektra One Solar System – the Ecologically Neutral Electric Aircraft.”

Coming soon – the Elektra Two and its solar version.