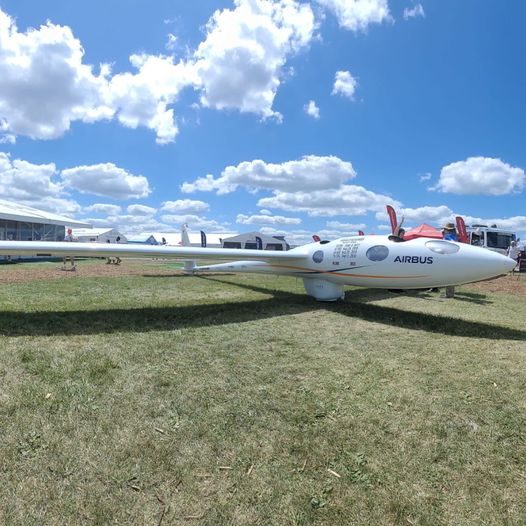 Most Interesting Formation Flight at Oshkosh?

Perlan 2, its Grob Egrett tow plane, and sponsor Airbus gave AirVenture 2022 attendees a glimpse of future records and promising technology.  Few people outside the Perlan Project have witnessed these two-planes flying in close formation, linked by a tow rope.

Initial attempts to get Perlan to an altitude where it could catch high-level mountain waves were hampered by the relatively slow climb of the conventional high-wing craft.

Because Einar Enevoldson, founder of the Project, had been a test pilot for the Grob aircraft works in Germany, he had reached a record altitude of 60,867 feet in their Stratos 2C, a twin-engine research craft powered by triple-supercharged Teledyne engines.  The Stratos is the highest flying piston-engine airplane.

Its single-engine cousin, the Egrett flies behind a turboprop engine, though, which enables towing the Perlan to the stratosphere for its final search for record altitude.

Spectators at AirVenture got a small taste of that stratospheric adventure, with a quick tow to airshow altitude, keeping it all within the control zone for Oshkosh.

Perlan and Egrett were stationed near the Airbus pavilion, a showcase for the firm’s visions of a carbon-free future – their Zero-E program.  To that end, Airbus has modified an Arcus J, what Airbus describes as, “Somewhat of an outlier in the world of aviation.”  Its 20-meter (65.62-foot) wingspan coupled with a retractable jet engine allow self launching and long-range touring.

Modified from an Arcus M motorized sailplane by Bob Carlton of Desert Aerospace for owner Dennis Tito, the craft is one of only a few Arcus Js in existence.  Airbus is using Tito’s and another – further modified to fly on hydrogen power, to make a comparison of contrails generated by a conventional jet engine and one fueled by H2.  Testing will take place at up to 33,000 feet, modest compared to Perlan’s records so far, but a common altitude at which jet airliners cruise. This is all part of a larger test program that includes mounting a small H2-fueled jet engine on an Airbus A380. 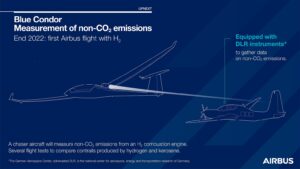 Blue Condor, launched by Airbus UpNext, is taking a modified glider up to 33,000 feet – an extreme altitude for an aircraft that normally cruises below 10,000 feet – to analyse hydrogen combustion’s impact on contrail properties. The result of this analysis will provide critical information on aviation’s non-CO2 emissions, including contrails and NOx, in advance of the ZEROe demonstrator flight testing.

In the second phase, the fully modified Arcus-J was expected to take its first flight this month. By November 2022, the modified glider will operate exclusively on hydrogen.  In the third phase, the Egrett will tow each Arcus-J to altitude, release them, and according to Airbus, “mirror their every movement at speeds of 80-85 knots during back-to-back tests.”  Instrumented by DLR – the German aerospace center, Egrett will monitor emissions and contrail from each sailplane. 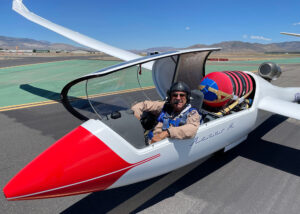 Perlan Chief Pilot in cockpit of Arcus-J, showing why rear seat was removed

Mathias Andriamisaina, Airbus Head of Zero-Emission Demonstrators, explains, “The Blue Condor project is a major milestone on our ZEROe journey as it will launch the first series of in-flight tests using a hydrogen combustion engine at Airbus,” explains These flight test campaigns will provide an excellent knowledge base on hydrogen’s impact on engine behavior, contrails and other non-CO2 emissions. This will undoubtedly inform the direction of future flight testing using the upcoming ZEROe A380 test platform.”

Researchers will be able to compare the condensation trails from H2 and JetA combustion.  On the surface, hydrogen should burn cleaner, but it emits 2.6 times more water vapor than the fossil fuels.  Would these vapor trails have a greater impact on the environment than those from conventional propulsion?  Blue Condor will measure at least two factors:

Blue Condor’s first two flight test campaigns will be carried out in Nevada, the third in North Dakota in partnership with the University of North Dakota, to take advantage of the ideal meteorological conditions. 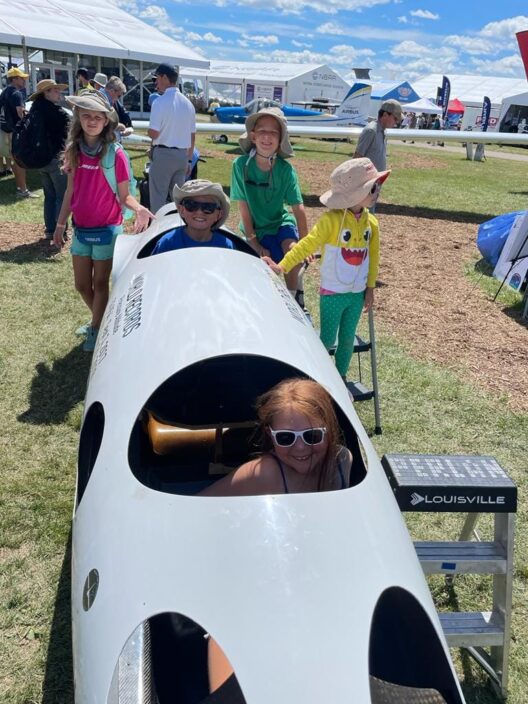 Kids and probably more than a few adults had a chance to test the interior of the Perlan 2 cockpit mockup at Oshkosh.  Pictures show happy faces on these future record seekers.  Who knows what dreams have been launched in this simple display piece?