Phinergy is an Israeli startup that promises high energy density energy storage systems, coupling zero emissions with light weight and great range in vehicle use.  The company’s technology is similar to that of another Israeli firm, Alydro, reported here last year, and to the use of aluminum beverage can pull tabs, water and vinegar by a Spanish teacher and student demonstrated at the model car level.

While Alydro does not seem to have shown a working model, Phinergy is demonstrating its technology in a small vehicle, sharing it all in an interview with Bloomberg Television. (Video updated June 28, 2017)

Phinergy explains its unique technology.  “Unlike conventional batteries that carry oxygen, these batteries freely breathe oxygen from the ambient air to release the energy contained in metals.”  In aluminum’s case, that energy amounts to 8 kilowatt-hours per kilogram.  Since the best lithium ion batteries might currently achieve 200 Watt-hours per kilogram, the aluminum battery could show 40 times the energy density (maybe not 100X as claimed by Phinergy, but a significant increase, nonetheless).

A Nissan Leaf lugs around a 600-pound battery pack to carry four passengers 125 miles.  According to Phinergy, their 55-pound pack can take their demonstration vehicle 1,000 miles, needing only to stop every 200 miles or so to top off with distilled water (why not carry a larger water tank?).  It does make a nifty demonstration of the process in the video, though.

A series of 50 aluminum plates give up their energy through the process in the Phinergy battery, oxidizing to aluminum hydroxide in the process.  These oxidized plates can then be remade into aluminum, prompting a few questions.  How much energy does it take to recycle these plates?  What happens to the aluminum lost in the process (the video suggests the plates are lighter at the end of their run than at the beginning)?

Green Car Reports describes the internal workings.  ” Very simply, an aluminum-air battery uses an aluminum plate as the anode, and ambient air as the cathode, with the aluminum slowly being sacrificed as its molecules combine with oxygen to give off energy. 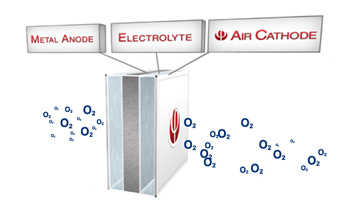 “Historically, aluminum-air batteries have been confined to military applications because of the need to remove the aluminum oxide and replace the aluminum anode plates.

“Phinergy says its patented cathode material allows oxygen from ambient air to enter the cell freely, while blocking contamination from carbon dioxide in the air–historically a cause of failure in aluminum-air cells.”

Exciting as it is, Phinergy (and other aluminum battery proponents) face the problem of developing infrastructures that would support swapping out batteries at the 1,000 mile mark.   This would require a support network to make recycling the aluminum plates a viable and economic proposition.

To eliminate that issue, Phinergy is working on a zinc-air alternative, allowing recharging over a longer lifetime, and offering the same advantages of light weight and long range of their aluminum-air version.  The zinc remains reusable and rechargeable for an as yet unspecified time.  The supporting infrastructure would be simpler and more plausible.

Phinergy notes an alliance with a European car maker, with production of their long-range electric car possible by 2017.  The use of a Citroen as the demonstrator in the video suggests that automaker as the potential ally, although Citroen shares production of many models with Peugeot and Toyota.

The idea of taking a journey that requires stops to refresh one’s self and one’s transport is refreshing in itself, and holds hope for the real-world emergence of a truly practical electric vehicle.