Charles Alcock reports for FutureFlight.com, and shares that, “Piaggio Aerospace is laying plans for a possible hydrogen-electric business aircraft featuring a completely new airframe.”  Piaggio is probably better know for the Vespa scooters that dot Italian boulevards,  Those have even gone electric, a saving grace for pedestrians along the strada who won’t have to inhale two-stroke engine fumes. 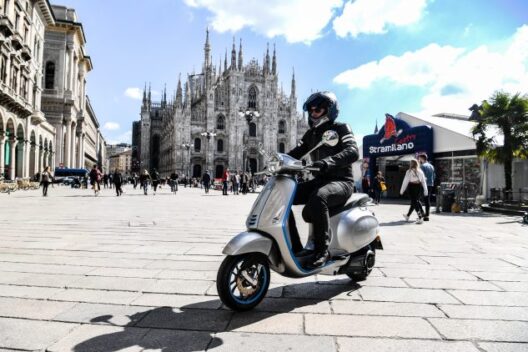 Piaggio makes two versions of its Elettrica – 45 Km/H (28 mph) and 70 Km/H (43.5 mph).  Both powered by a four kilowatt (5.36 horsepower) motor, driven by a 48 Volt, 25 kilogram (55 pound) battery.  The speed difference seems to be a software/firmware setting that limits the slower scooter to a regulated speed.

It would seem almost natural, then, that the company would electrify its next aircraft.  It’s not that simple, according to Piaggio’s Chief Technology Officer.

Piaggio is an industrial giant, established in 1884 and building aircraft since 1915.  The firm built single-, twin-, three-, and four-engine aircraft, including trainers, bombers, transports, and amphibians.  In the 1980s, they introduced the P.180 Avanti, a radical three-surface design that still attracts gawkers on airfields today. 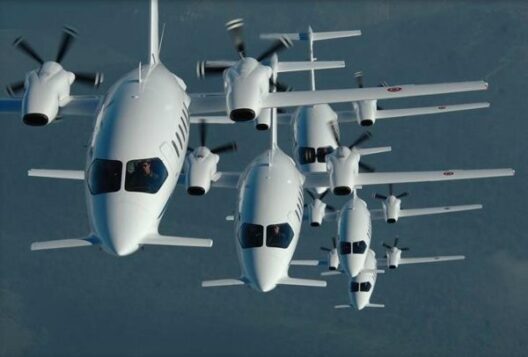 Rare and unmistakable, and not often seen in formation, P.180 provides speed, luxury and exclusivity

This would seem a loss, because of the original’s performance credentials.  According to Wikipedia, “Joe Ritchie with co-pilot Steve Fossett set National Aeronautic Association and Fédération Aéronautique Internationale transcontinental speed records with an average speed of 475.2 knots (880.1 km/h or 546.9 mph).

Piaggio’s engineers considered hybrid- and full-electric versions of the possible eP.180.  Because of battery weight, it would carry four passengers (instead of the six in the turbine version), two pilots, and manage only a 300 nautical mile (345 statute mile) range – far short of the continent spanning turbine model.  Batteries would increase the weight from 12,100 pounds to 16,200 pounds.  Without changing wingspan, wing area, and corresponding canard and horizontal tail sizes, this would mean longer takeoff and landing runs on the same power and lower rates of climb.

An alternative hydrogen-electric power system would require liquid hydrogen fuel tanks in the forward part of each nacelle.  56 kilograms (123 pounds) of fuel would feed air-cooled fuel cells powering electric motors, which would drive pusher propellers.  This would give the same range as the battery powered version.

Sollo and Piaggio think it will be “more productive” to design a new airframe.  With a new owner taking over the legacy company, this would add a measure of risk to the enterprise.  As aircraft makers have found in the past and more recently, even a seemingly simple change to an existing airframe can bring unforeseen problems, and a new airframe requires all new engineering.  In the meantime, an aerobatic demonstration that’s pretty stunning.

The economics of such a move would be daunting.  At a cost of almost $8 million, a new P.180 represents a major investment for most companies.  The limited production over the last 36 years leaves 213 of the 238 produced up to 2020 still airworthy.  Whether it can remain competitive in a crowded market with a probably pricey, and relatively unproven, new power system remains to be seen.