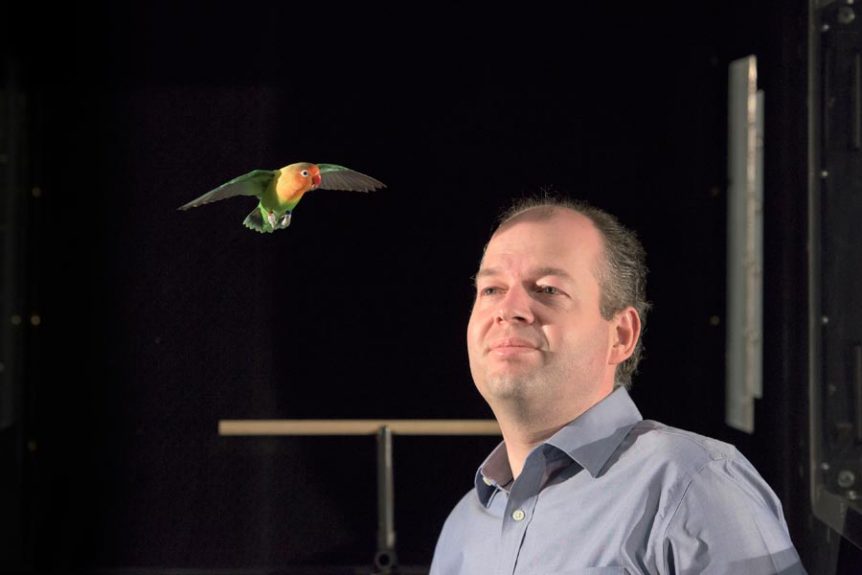 We lag behind nature in many areas, and constantly need to remind ourselves of our relative ignorance of her many secrets.  Feathers are a case in point, and Stanford University researchers found that, unable to duplicate the nature of these lightest of airborne structures, they needed to use the real thing in their latest drone.

The IEEE Spectrum reports, “The few attempts at making artificial feathers that we’ve seen in the past have been sufficient for a few specific purposes but haven’t really come close to emulating the capabilities that real feathers bestow on the wings of birds. So a century later, we’re still doing the rigid wings with discrete flappy bits, while birds (one has to assume) continue to judge us for our poor choices.”

Before looking at Stanford University’s Pigeonbot, we will indulge a few minutes learning how complex a seemingly simple feather really is.

Those wishing to delve deeper can turn to a marvelous book by Thor Hanson, Feathers, The Evolution of a Natural Miracle.  Hanson recounts the evolution and biology of feathers and tosses in compelling anecdotes.  One such explains that the most expensive things lost in the sinking of the Titanic (aside from the 1,200 lives) were $400,000 (millions now) in mainly ostrich feathers bound for New York milliners – part of the feather craze in fashion then.

The Trouble with Feathers

As seen in the near-microscopic analysis of feathers in the first video, feathers are extraordinarily complex, with properties that seem to vary between velco grabbiness and banana-like slipperiness.

Unable to duplicate those characteristics and complexity, researchers at Stanford University had to find another way to plume their robotic pigeon.  David Lentink, assistant professor of mechanical engineering and head of Stanford’s Bio-Inspired Research & Design (BIRD) Lab, explains the difficulties. “Feathers aren’t just more complicated to manufacture, but you have to find some way of replicating and managing all of the complex feather-on-feather interactions that govern wing morphing in real birds. For example, by examining real feathers, the researchers discovered that adjacent feathers stick to each other to resist sliding in one direction only using micron-scale features that researchers describe as ‘directional Velcro,’ something ‘new to science and technology.’ Real feathers can slide to allow the wing to morph, but past a certain point, the directional Velcro engages to keep gaps from developing in the wing surface. There are additional practical advantages, too: ‘they are softer, lighter, more robust, and easier to get back into shape after a crash by simply preening ruffled feathers between one’s fingers.’

While feathers themselves may be irreproducible, Lentink’s student researchers discovered that “birds maintain control by morphing the shape of their wings,” which turned to be relatively simple to imitate.  The student-made PigeonBot uses a pair of “biohybrid morphing wings” with mechanical undergirding and real feathers.

Morphing consists of movements about two joints on the bird’s wings corresponding to the wrist and finger joints on a human.  Lentink found that simply movements of the finger joints could induce rolling, “and that this technique is inherently much more stable than the aileron roll used by conventional aircraft.” 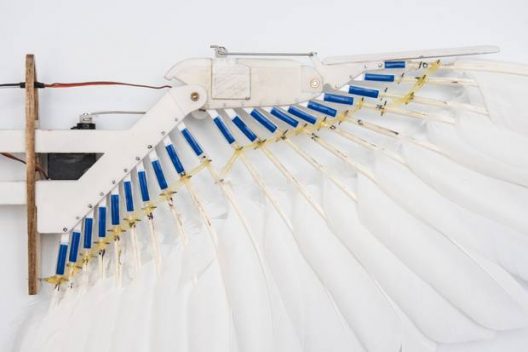 With the real feathers elastically connected to a pair of robotic bird wings with wrist and finger joints that can be actuated individually, PigeonBot relies on its biohybrid systems for maneuvering. Image: Lentink Lab/Stanford University

“The other cool thing we found is that the morphing wing asymmetry results automatically in a steady roll angle. In contrast aircraft aileron left-right asymmetry results in a roll rate, which the pilot or autopilot then has to stop to achieve a steady roll angle. Controlling a banked turn via roll angle is much simpler than via roll rate. We think it may enable birds to fly more stably in turbulence, because wing asymmetry corresponds to an equilibrium angle that the wings automatically converge to. If you are flying in turbulence and have to control the robot or airplane attitude via roll rate in response to many stochastic perturbations, roll angle has to be actively adjusted continuously without any helpful passive dynamics of the wing. Although this finding requires more research and testing, it shows how aerospace engineers can find inspiration to think outside of the box by studying how birds fly”.

Researchers are not patenting their discoveries, having “decided … to help proliferate our discovery to the benefit of society at large” in the hopes that anyone who makes a huge pile of money off of it will (among other things) invest in bird conservation in gratitude.”

In future, Lentink wants to add a biohybrid morphing tail, legs with grasping feet, and additional actuators.  Perhaps he can find a way to do away with the un-bird-like propeller, a giveaway that might not impress other avian creatures.

A Wind Tunnel for Birds

The image at the head of this entry is of David Lentink and a parrot friend in Stanford’s wind tunnel for birds and drones. 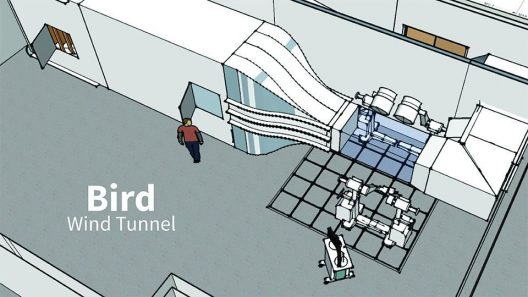