100-percent paved for the first time in the 91 year history of the Pikes Peak International Hill Climb last weekend,  maybe the road’s lack of flying gravel contributed to the extremely quick times.

Chip Yates, who had set a world record for his electric motorcycle assault on the course, did not race this year, probably involved with his Flight of the Century program.

This year, Carlin Dunne performed the honor of riding the fastest on an electric motorcycle – a Lightning with an IPM liquid cooled, 125kw+, 10,000 rpm motor, as used, according to Lightning’s CEO, in the Chevrolet Tahoe.   Telling Motorcycle.com, “If it can push a 6,000-plus pound truck, think of its performance in a 500-pound motorcycle.” CEO Hatfield says the motor units have been certified to last 900,000 miles.

Maybe those specs made it the fastest of all motorcycles, even beating the Ducatis on which Dunne has set previous hill climb records   This year, the fastest Ducati came in second, over 20 seconds behind the electric bike. 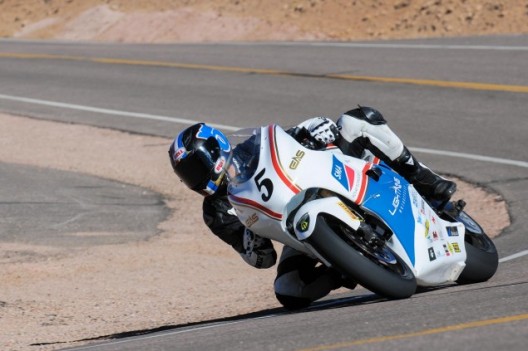 Lightning established a new world’s record of 215 mph at the Bonneville Salt Flats, including a fast run of 218 mph.  It might be as green as a bike can get, using solar energy to charge its EnerDel lithium batteries.  Lightning claims it’s the first racing vehicle in “major motorsports events” to leave a zero carbon footprint, although the teams that race across Australia in its famous solar races might quibble with that.

Dunne was fairly enthusiastic about his mount.  “Its power and acceleration is like nothing I’ve ever ridden. When you light that fuse, hang on.”  He managed to hang on for 10 minutes, 0.694 seconds to come in ninth overall and first for all motorcycles, averaging 71.917 mph for the 12.42 mile climb. 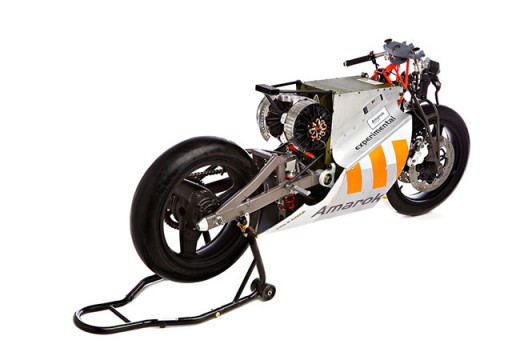 Greg Tracy was perched on an Amarok P1A, a motorcycle built in “Atlantic Canada” and which attempted crowd funding to find its way to Colorado.  The builders give credit for their design approach to aircraft designers Burt Rutan, Jack Northrop and racing car legend Colin Chapman.  They emulate their inspirations with a “multicellular structural aluminum fuselage” to gain strength with lightness.  Their hill climber weighs only 147 kilograms (323.4 pounds), considerably less than Chip Yates’ earlier record holder. The lower weight is pushed around by two Agni motors, similar to those sold for aircraft use by Electravia in France, which send 80 horsepower to the rear wheel.

Zero Motorcycles had no fewer than six entrants, including Jeff Clark (12 minutes), Jeremiah Johnson (12:05), Troy Siahaan – a Motorcycle.com editor) (12:24).  Zero notes that all three of their top finishers were quicker than the previous electric motorcycle record time set by Chip Yates in 2011.  Zero doesn’t forget the other three team members: “In addition to the top three finishing Zero riders… Ted Rich (12:53), Nathan Barker (13:14) and Brandon Miller (13:16) set impressive times as well.”  Since the Zeros were essentially production-type bikes one can buy at a dealer, the team’s performance is especially noteworthy. 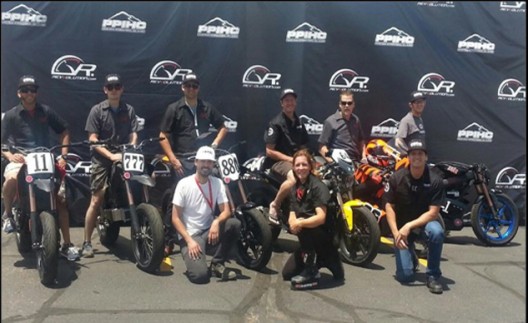 Considering the rain and snow that slowed later runs, all of the numbers are impressive.  Given that, a few gas guzzlers still outdid everyone this year, with an astonishing run by Peugeot-driving Sebastian Loeb, who flew up the mountain in 8:13:878 for an 87.471 mph average.  Ryhs Millen, in another Peugeot, was over 8 mph slower – still faster than anything last year.  All top five finishers, including the first place electric car, set the bar higher than any previous runs.

Nobuhiro “Monster” Tajima came in fifth overall and first for electric vehicles with a  9:46.530 time in his extreme electric Mitsubishi – not quite like the MiEV you can buy at your local dealer.  The victory was icing on his 63rd birthday cake.

With more electric entries than ever, we can certainly see a trend.  Expect to see a larger presence of current-driven vehicles in coming contests.

(Editor’s Note and Correction: Jeff Clark provided a comment that corrects the information for Greg Tracey:  “Great write-up. A small correction however, Greg Tracy was scheduled to ride the Amarok earlier in the year but he drove a Mitsubishi electric car in the race. Amarok did not finish the 12.42 mile course but came within a mile of the finish line. Tracy’s time shown is what he did in the Mitsubishi.”  Your editor got lost in the vehicle swapping that took place leading up to the race.)