News from Joseph Oldham, founder of the Sustainable Aviation Project, and Michael Coates, United States master distributor for Pipistrel Aircraft, heralds the largest delivery of electric training aircraft to date.  Four Pipistrel Alpha Electro Trainers showed up at Fresno, California’s Chandler Airport, all part of the Sustainable Aviation Project.  Described as “a public-private collaboration to reduce the cost of flight training through the use of all-electric general aviation airplanes,” the Project might become a role model for future electric flight training.

On March 19, two 18-wheel trucks delivered two 40-foot shipping containers.  Each container carried two Alpha Electros, two chargers, and a pair of replacement battery packs for each airplane.  It took a mere two hours for a volunteer crew of up to six to remove the aircraft and chargers from the containers, leaving an X-Alpha simulator to be sent on its lonely way to Cypress College in Los Angeles. 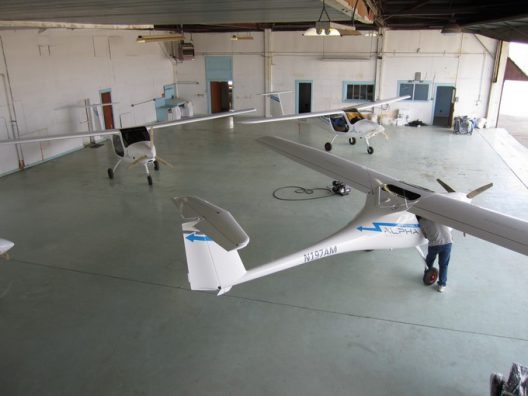 Michael Coates reported, “After removing all the plastic wrapping it took about 10 minutes per plane to install the wings and horizontal stabilizers; the way Pipistrel designed the planes makes installation of the wings an easy process especially with all of our helpers on-hand.

“…Coates… was joined by Sabi Apai, the Pipistrel dealer for California who both helped guide the unloading and assembly process and were a great help!

“The planes had been in the containers at sea for 3 months due to incorrect shipping routing by CMA-CGM (dig intended and no apology from them received) where they endlessly sailed the world’s oceans and yet, the batteries were still at from 43% to 53% State of Charge when unloaded. All aircraft were charged to the recommended resting charge of 60-65% the next day.”

Joseph Oldham is a driving force behind this electrification of flight training in the Central Valley.  Aircraft and chargers will be fielded at Reedley Municipal Airport (032), William Robert Johnston Municipal Airport in Mendota (M90), Fresno Chandler Executive Airport (KFCH), and Fresno Yosemite International Airport (KFAT).  This distribution was planned by Joseph and Richard Duncan, manager of Fresno Chandler Executive Airport.  Working with project partners including the Cities of Reedley and Mendota, Reedley College, the Fresno Business Council and the CALSTART San Joaquin Valley Clean Transportation Center, they came up with a plan that allows the admittedly short-range aircraft to leave the traffic pattern, fly to a participating airport, recharge, and return.  Cross-country trips will enable student pilots to gain the full gamut of skills necessary to achieve full certification.

Oldham explains in his press release, “We ended up with a unique public-private collaboration … to prove electric airplanes can dramatically cut the cost of flight training, and venture beyond the traffic pattern. The planes are being used to provide flight training for disadvantaged youth in the San Joaquin Valley with a primary focus on youth from the City of Reedley and the City of Mendota, both rural farming communities with high unemployment levels.  We have set up a new non-profit corporation, New Vision Aviation, that will provide the flight training, operate, and maintain the aircraft on behalf of the two cities and we have just completed our instructor training program after getting our instructors validated on the aircraft.  Now is the time for students to take to the skies.”

Michael Coates explained to your editor that the motor powering the Alpha Electro is a product of their own making, and their Information Pack for the airplane adds that it is an Emrax motor modified by Pipistrel for use in this particular airplane.  The Electro 60 motor and controller puts out 60 kilowatts (80.4 horsepower) maximum power for up to one minute and 50 kW (67 hp.) continuously.  Samsung batteries contained in Pipistrel-made battery boxes and controlled by Pipistrel battery management systems (BMS) allow up to an hour in a traffic pattern with a 20 minute reserve for the Light Sport Aircraft version of the plane.  Cross-country trips can last up to 45 minutes with 18 kilowatts consumed at 75 knots (86 mph) from the 21 kilowatt=hour pack.

The strategic positioning of the airports chosen for this training program allows for safe transit between the fields, with each offering the full-service needs of visiting aircraft.  Chargers enable “refills” of battery packs, and spare, fully-charged packs allow five-minute swaps – not any worse than climbing on a ladder, dip-sticking the tank and performing refueling on a conventional airplane.

From your editor’s own experience, a Cessna 150 can consume five to seven gallons of avgas per hour at a cost of $4.96 to $5.55 a gallon, as reported by 100LL.com.  Locally (Aloha, Oregon), Portland General Electric charges residential users a low of 8.8 cents to a high of 18.1 cents per kilowatt-hour of electricity.  The 21-kilowatt-hour pack on the Alpha Electro would cost $1.85 to $3.80 for a full charge at those rates.

“During the winter, there [are] no peak demand costs, only partial and off-peak.  In this case the average should be about $.19 per kWh for the 56 kWh used each day or $2.66 per hour.”  These hard numbers will be hard to beat with fossil-fuel powered equivalent aircraft.  Since the Alpha Trainer with the Rotax 912 UL engine burns a mere 2.5 gallons of 100LL per hour, fuel costs will be around $11.00 or $12.00.  That doesn’t include the higher maintenance costs for the Rotax, though.

Titan Aircraft lists a new 912 UL at $14,337.  Discussions on the web suggest that the UL engine will achieve 2,000 hours between overhauls.  Many rebuilders like Brian Carpenter suggest selling the engine at that point and getting a new one from the factory.  Core engines seem to fetch $2,000 to $3.500, so the replacement ends up costing about $12,000, or $6.00 per hour.  Of course, maintenance, oil changes, spark plugs, etc. run that number up considerably.  As noted above, direct operating costs for a traditional trainer such as a Cessna 150/152 can top $30 an hour just for fuel.

By contrast, Pipistrel’s Electro 60 motor consumes relatively little energy and has two overhaul periods at a TBO of 2,000 hours, and according to numbers from the Pipistrel Alpha Electro Information Pack an overhaul cost of 500 Euros ($616) plus 12 hours of labor.  With a motor life limit of 6,000 hours, replacement will cost about 10,000 euros ($12,320).

If the Sustainable Aviation Project can achieve FAA certification and approval for their aircraft and training program, we could see an inexpensive route to attain private pilot ratings, and once-again busy private fields in rural areas.  This regional approach to flight was envisioned by William T. Piper, and the Alpha Electro could be a worthy successor to the iconic Piper Cub.