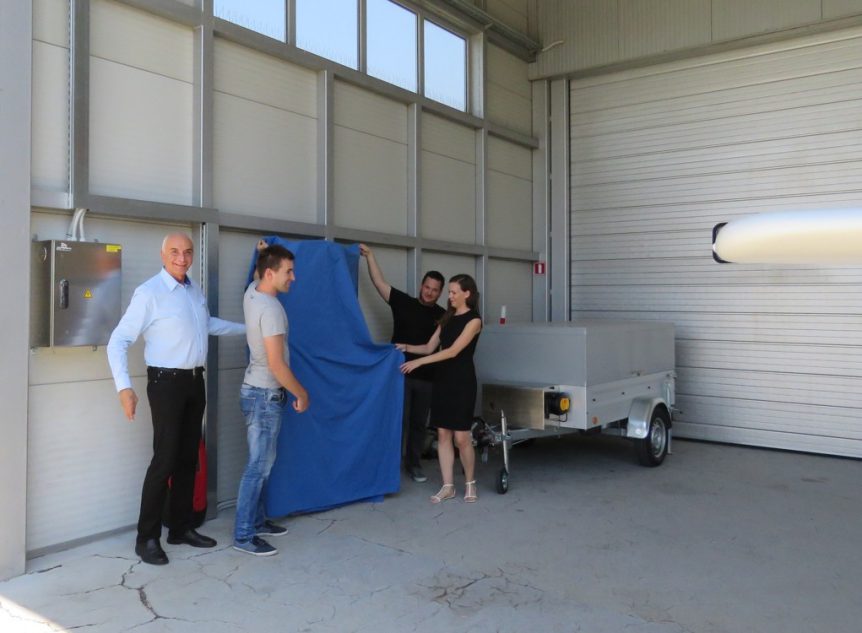 On August 30. Pipistrel inaugurated the first electric charging station to fully warrant the name, charging one of their own Alpha Electro trainers.  The project was co-financed by the Ministry of Education, Science and Sport and the European Union from the European Social Fund.  Led by Pipistrel, the LECAD Laboratory, and the Academy of Fine Arts and Design, mentors and students developed and constructed a fully-functioning station. 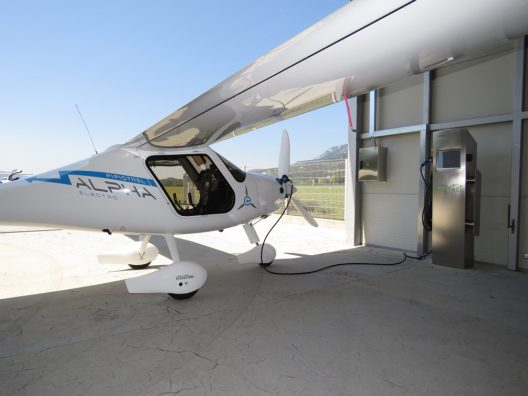 As Pipistrel explains, “The goal of the project was the production and installation of a (public) charging station for electric airplanes, since in the filling of electric aircraft, in practice, the need for stationary charging has been shown.” 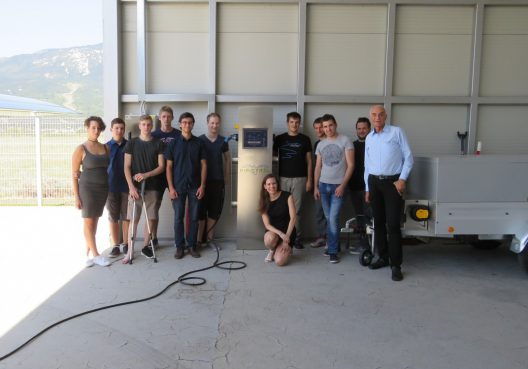 The team that developed this very finished looking station, combining their skills in science, electronics and the arts

Mentors and students from LECAD Laboratory, the Academy of Fine Arts and the Faculty of Mechanical Engineering in Ljubljana, Slovenia, power with their stationary charging station

Pipistrel has been a leader in electrified aircraft, starting with the Taurus Electro G2, which went into serial production in early 2011.  A resourceful Tine Tomazic, Pipistrel’s R&D director, hooked two of the G2s together with a new central wing to make the Green Flight Challenge winning G4 in 2011.  That airplane and the second place e-Genius from Stuttgart University both received electricity from a specially-installed “charging station” fed by electricity from a nearby geothermal generating plant.  Note that “charging station” is in quotes.

Smugness Goes Before an Apology

After receiving the press release from Taja Boscarol about their charging station, your editor felt compelled to leave all diplomacy and tact in the lurch, and instead send this smug and totally tactless message to Pipistel.

Ms. Boscarol, not responding in kind, schooled your editor with a calm grace and a host of impeccable historical and technical verities.

“However, the situation is as follows:
“At the NASA Challenge of 2011 there were 2 fully electric aircraft: the e-Genius and Pipistrel G4. 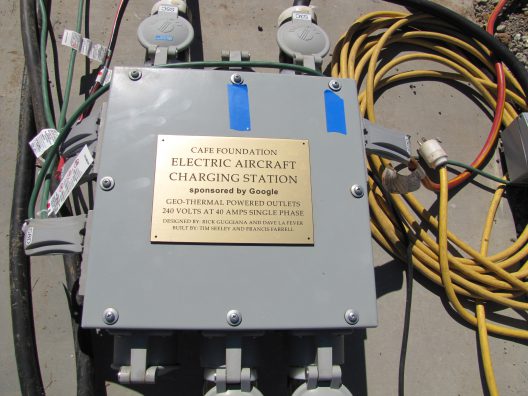 “At the Santa Rosa airport, there was no power supply strong enough to charge both aircraft over the night for the next day’s flight. Because of this, Google sponsored a CHARGING POINT. The difference between a charging point and a charging station is enormous. Charging point is basically a power supply, a socket connected to the grid (or to geo-thermal source in Santa Rosa’s case) which of course must be strong enough to charge two aircraft simultaneously. To use the charging point you still need an external charger, which is designed for each specific consumer’s needs (in this case aircraft). It must have the same charging protocol that the aircraft has, must include all electronic components such as AC/DC converter etc.  Charging point doesn’t have all that. At NASA Challenge at Santa Rosa we both had our own chargers with us and we connected them to the charging point.

“The CHARGING STATION we recently developed and you are speaking about, however, already includes hundreds of elements, a computer, charging protocol, AC/DC converter, communication with owner’s cell phone, WIFI etc. To be more understandable I will give you an example:

“Not to be too long: our information is correct. We are talking about the first aircraft charging station in the world. The NASA challenge charging point was not a station. It might have been called a station, it even has “station” written on it (see attached photo), but it was just outlets with a geothermal source, strong enough to support 2 aircraft.

“FYI, all our aircraft receive also a charger (included in the basic price) with all the needed equipment to charge from any charging point.  Also without a charging station.”

Your editor notes and acknowledges the good counsel and (we hope) good humor displayed by Ms. Boscarol in her response.  Your editor continues to hope that he will someday find the easy grace and kind intelligence that is said to come with age.  Thank you, Taja, for your kindness.