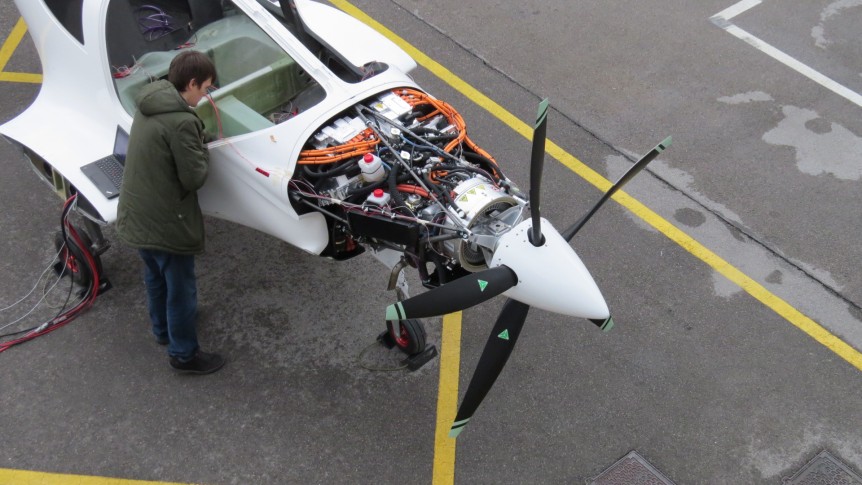 Pipistrel took the wraps off its latest iteration of what was originally called the Panthera, the hybrid variant of which has been renamed the HYPSTAIR, a pun that fails to diminish the significance of the achievement. 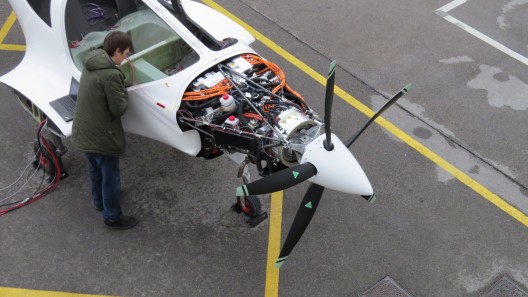 Compact but powerful hybrid power system might allow for sleeker cowling than that of original Panthera design.

Pipistrel clams the most powerful aerial hybrid electric power train, powering it up on February 9 and making a mighty, but subdued noise, much of it coming from the specially-designed, five-bladed propeller.

Putting out 200 kilowatts (268 horsepower) at full throttle, the Siemens motor turned the propeller using first just the generator, and then the motor in low and high power modes. The propulsor (perhaps a new term to consider as hybrid power becomes a common operational type for electric aircraft) produces 100 kW (134 hp.) from the generator driven by a turbonormalized internal combustion engine, and the top rated power from the drive motor (150 kW continuous, or 201 hp.).

These impressive numbers allow the HYPSTAIR to achieve the same kinds of performance of which the original Panthera was capable with its Lycoming IO-390 engine.  That engine could not run on automotive gasoline, though – part of Panthera’s initial specification. 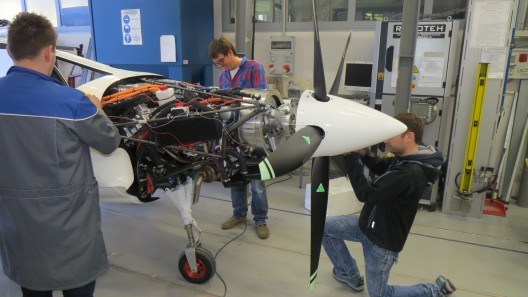 Preparing for the big day; note the carefully fitted components in the “propulsor” system, including the four inverters (power controllers) near the firewall

Pipistrel calls the system “a new breed of aviation propulsion, which extends the range of all-electric aircraft while being environmentally friendly and quiet.”  The firm explains the power system “can run in three modalities: electric-only mode using batteries, generator-only mode or hybrid mode combining both power sources. “

The system has a power density of five kilowatts per kilogram (3.18 hp. per pound), dual windings and four power controllers for reliability.  The human-machine-interface, something Tine Tomazic has worked on for the last several years, simplifies the operation of this otherwise complex power train.  The pilot controls power with a single lever with haptic feedback and views the system’s status and output on a new integrated cockpit display.  The complete system will look and behave a great deal like a conventional aircraft’s FADEC (Full Authority Digital Engine Control) system. 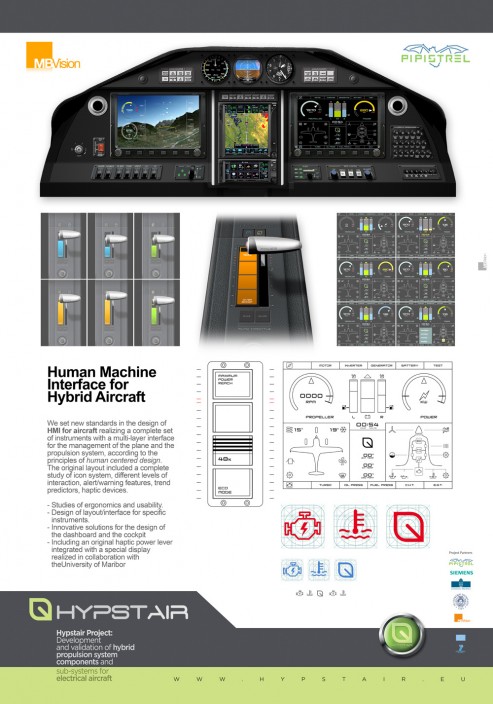 Hypstair’s human-machine-interface: simplifying monitoring and control of a complex system

Primary developers of the airplane and its power system commented on the demonstration of this new hybrid.  Pipistrel CEO Ivo Boscarol, commented, “We are proud of what HYPSTAIR represents for the development of electric flight. It demonstrates the possibility for general aviation class aircraft to be electrically powered and it confirms the vision of Pipistrel – we were the first to design a four seat aircraft, the Panthera, which can be alternatively equipped with three different propulsion types: piston engine, electric motor or hybrid powertrain. Project HYPSTAIR represents a major step in the direction of a hybrid aircraft and an opportunity for Pipistrel and other general aviation aircraft manufacturers.”

Frank Anton, Head of e-Aircraft and the initiator of electric aircraft development at Siemens AG added, “Siemens is developing electric drive systems with highest power-to-weight ratio for aircraft propulsion. Only with innovation we can solve the problems of rising fuel costs, rising passenger demand and rising environmental regulation. Innovations developed for the HYPSTAIR hybrid-electric powertrain will be instrumental in making aviation more sustainable in the long run. As electric drives are scalable, we can expect that in the future also larger aircraft will use electric propulsion. The world is becoming electric, whether in the air, on land or at sea.” 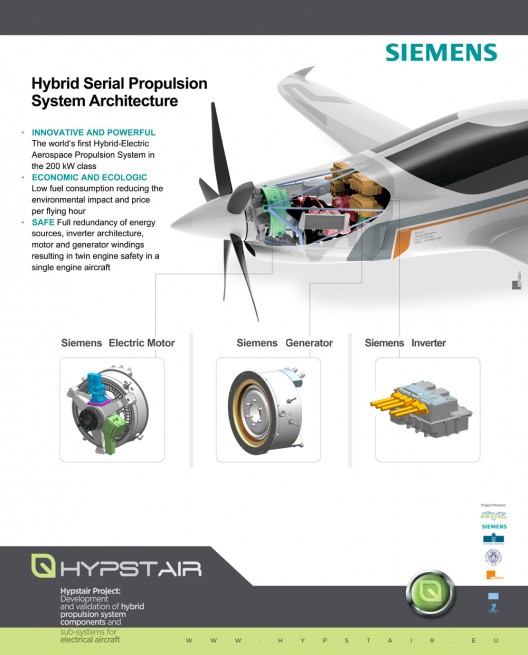 Hypstair’s motor/generator components. Project has yet to identify engine used to drive generator

Unveiled at the E2 Fliegen Symposium 2016 in Stuttgart, Germany, HYPSTAIR will undergo additional testing in the next few months.   By the time Dr. Tine Tomazic of Pipistrel and Dr. Frank Anton appear at the Sustainable Aviation Symposium in San Francisco on May 6 and 7, There should be a great deal of new information to share with attendees.

Project HYPSTAIR has received funding from the European Union’s Seventh Framework Program for research, technological development and demonstration under grant agreement no. 605305. Project partners are Pipistrel d.o.o. Ajdovščina, Siemens AG, MBVision, the University of Pisa and the University of Maribor.