Editor’s Note: We will tackle some larger contexts for the blog, including not only the aeronautical uses of clean energy but the social, environmental and even economic implications of sustainable aviation.  This item appeals because it demonstrates the possibility of transforming materials otherwise hard to live with into products that enhance life and even give some hope for budget solar cells.  Angela Belcher has made battteries from viruses and works with biological solutions to energy production.  In this instance, she and her colleagues have shown a path to a sunnier future for all.  Her work combining quantum physics and biology in the example below highlights the potential in a true paradigm shift.

Another, less exotic but no less exciting instance shows the broad-ranging and inventive minds at work in Dr. Belcher’s laboratory.

In use since the Victorian Age, lead-acid batteries are among the most common energy storage devices, even after decades of being challenged by newer technologies.  Almost every car has a lead-acid battery under the hood – even hybrids that rely on lithium or other metal batteries for propulsion.  Used lead-acid batteries (ULABs) eventually deteriorate to the point where they can no longer kick over the starter or fire up the lights in their vehicle and are recycled or discarded.

Worstpolluted.org says, “Because of the toxic materials within these used batteries, the Basel Convention has included ULABs on its list of materials classified as ‘hazardous waste.’” Often, especially in emerging nations, the batteries are smelted into lead ingots, but just as often by child laborers who are unprotected from toxic fumes.  Batteries tossed into landfills leach out lead into groundwater and eventually streams and rivers.

In this country, the lead in those batteries is smelted under usually more controlled conditions, and 80 percent of lead removed from used batteries ends up going back into service in new batteries.  If Massachusetts Institute of Technology (MIT) researchers are correct in their assumptions, though, used batteries may find new life as solar cells. 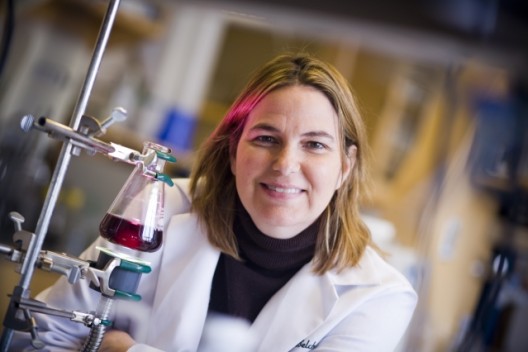 Angela Belcher, a favorite of ours for many years, has announced a way to whip up perovskite-based solar cells from recycled lead plates no longer energetic enough for batteries.  Better still, the solar cells are an inexpensive replacement for silicon photovoltaics.  As the MIT Energy Initiative article by Nancy W. Stauffer explains, “Laboratory experiments confirm that solar cells made with recycled lead work just as well as those made with high-purity, commercially available starting materials.”  This would alleviate the need to mine new lead, benefitting the environment even while researchers look for “more benign but equally effective material” to replace the lead.

Perovskites are the newest miracle material, crystalline photovoltaics made from literally dirt cheap and readily available materials and used in an increasing number of electronics applications.  Rapidly increasing in efficiency, the minerals have drawn the attention of materials guru Belcher.  The James Mason Crafts Professor in biological engineering and materials science and engineering at MIT is amused to report, “When perovskite-based solar cells first came out, they were a few percent efficient.  Then they were 6 percent efficient, then 15 percent, and then 20 percent. It was really fun to watch the efficiencies skyrocket over the course of a couple years.”  Beyond that, perovskites can be easily processed at low temperatures, and the final cells can be thin, lightweight and flexible.  Imagine these thin films bedecking windows, buildings and maybe even wings. 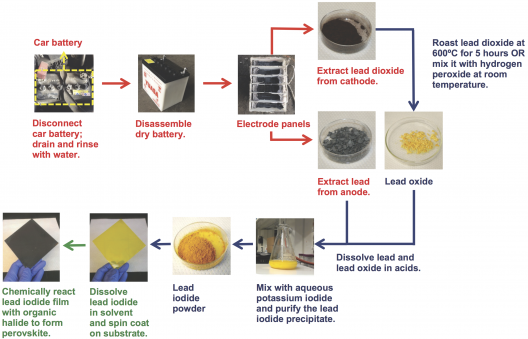 Processing can be done at room temperatures, with readily available materials, as shown in the video below.  Belcher and her colleague, Paula Hammond, made them with simple materials.  It shows a process that is self-censored by the pair because they found that high school students were following the video to make science fair presentations, they had the section on extracting the materials from old car batteries removed, worrying that the lead and acid might present a health hazard to kids not up on material safety data sheets (MSDS).

Opening a battery and safely removing the lead and acid was worrisome enough that one of Belcher’s post-doctoral students, Po-Yen Chen (PhD 2015), then in Taiwan, had a local battery-recycling center perform the vital first steps so he could make solar cells.

Belcher and Hammond wondered if their recycled materials would produce as high efficiency a cell as ones made from all new materials.  They made some of each for comparison testing.  Through a variety of tests, they discovered that thin films made from car batteries and high-purity commercial lead iodide  had the same nanocrystalline structure and demonstrated essentially the same light-harvesting capability.  Their ability to absorb light at different wavelengths was the same, and all showed about the same power conversion efficiency (PCE), the fraction of incoming solar power that is converted to electrical power.  Belcher commented, “So device quality doesn’t suffer from the use of materials recovered from spent car batteries.” 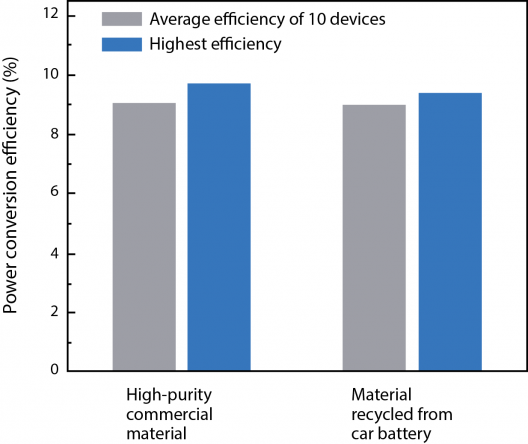 The researchers wanted to make sure their samples, which came from one used car battery, were not a lucky hit.  They bought three more batteries from the same Taiwanese recycling center, each with a different life history, from six months to four years in use.  Although the older batteries had more lead sulfate on their plates, the procedures used to turn them into solar cells yielded the same results.

The MIT article concludes, “Based on their results, Belcher and Hammond concluded that recycled lead could be integrated into any type of process that researchers are using to fabricate perovskite-based solar cells — and indeed to make other types of lead-containing solar cells, light-emitting diodes, piezoelectric devices, and more.”

These seem like important breakthroughs: inexpensive, easily-manufactured solar cells with relatively high efficiency, made from a material that would otherwise clog landfills with toxic leaching.  But, the researchers premise, rolling that perovskite thin film to just half a micrometer (0.0000197inches!) thick and a single car battery could provide enough material for 700 square meters (7,535 square feet) of solar cells – enough to power 14 typical homes in Cambridge, Massachusetts or 30 homes in sunny Las Vegas, Nevada.

Even lead-based solar cells that thin would certainly not weigh down an electric vehicle to any significant degree.  The 10-percent efficiency from lead-derived perovskites demonstrated so far is less than half the 22-percent output of the cells on Solar Impulse 2, but others have taken the materials to a claimed 20-percent efficiency.

According to MIT, “Powering the whole United States would take about 12.2 million recycled car batteries, fabricated into 8,634 square kilometers (3,334 square miles – about three Rhode Islands or 1/30th of Nevada) of perovskite solar panels operating under conditions similar to those in Nevada.”

Belcher and Hammond want to use a cleaner material alternative, though, reducing toxicity while obtaining some “pretty decent efficiencies” from the tested but undisclosed alternatives so far.  If they continue along this road, the researchers may create efficient, cheap and truly environmentally responsible solar cells.

This research was supported by the Italian energy company Eni S.p.A., a founding member of the MIT Energy Initiative.

This article appears in the Autumn 2015 issue of Energy Futures, the magazine of the MIT Energy Initiative.