Several news sources, apparently using the same press release from Mitsubishi Chemical Corp., have announced a spray-on solar cell, which can be applied in the same fashion as paint – to “buildings, vehicles and even clothing.”  This “means that the places where energy from the sun can be harvested are almost limitless.”

Less than one millimeter thick and capable of 10.1-percent efficiency, the new material is said to have a weight one-tenth of traditional silicon cells.  Mitsubishi says these are prototype materials, and that they hope to achieve 15-percent efficiency by 2015, with 20 percent as a more distant possibility. 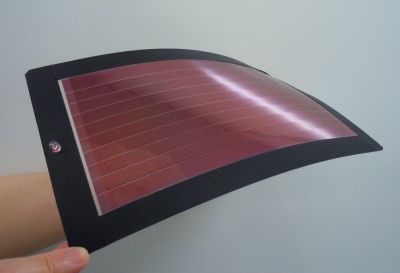 Mitsubishi is a bit soft on details, but says, “The new solar cells utilize carbon compounds which, when dried and solidified, act as semiconductors and generate electricity in reaction to being exposed to light. Most existing solar cell technology requires crystalline silicon to be sandwiched between glass sheets and positioned on the roofs of homes and office buildings, or in space-consuming ‘solar parks.’”

Since the new material is said to be “particularly effective” on round or curved structures, it could be applied to buildings and car exteriors, and help to power either.

The company says it “plans to work with domestic carmakers to build a car coated with the new solar cells with the aim of giving the vehicle sufficient power to travel 10 kilometers after being exposed to sunlight for two hours.”  In your editor’s opinion, this might lead to a practical solar-powered commuter car, especially as such cells improve in efficiency.

Researchers at Stanford University, under the direction of Dr. Yi Cui, have demonstrated printable batteries, which work even on paper.  According to Mitsubishi, “Scientists from The Australian Commonwealth Scientific and Research Organization, the University of Melbourne and the University of Padua in Italy are collaborating on ‘printable laser’ technology which could impose nano-particles onto wafer-thin panels which could then eventually be developed into into paper-thin solar panels.”  Imagine these technologies combined into an energy generating and storage system.

The National Renewable Energy Laboratory has experimented with spray-on nano-particle based solar coatings.

Their thinness and low weight make the spray-on cells attractive for future aircraft, too.  Their low efficiency notwithstanding, if the process can be kept cost-effective, the cells could cover large enough areas to allow some benefit in extending electric aircraft range.