Powering Imagination, a symposium devoted to that premise and to encouraging the development of electric aviation, achieved both goals on Saturday, February 28 at Seattle’s Museum of Flight.  Organized by Erik Lindbergh and Eric Bartsch, the gathering included two panel discussions and eight presentations that helped define where the world of electric flight might be heading.  Between 10:00 a.m. and 5:00 p.m., presenters covered a lot of ground. 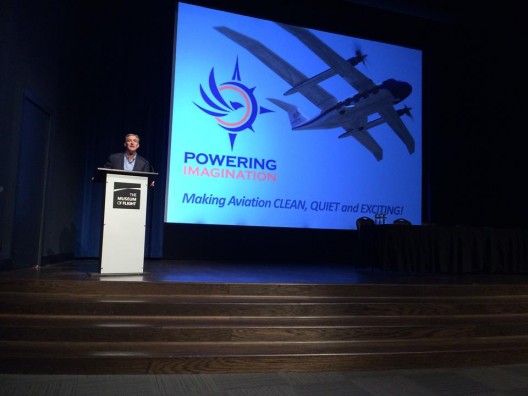 Following Cale Wilcox, the Public Programs Coordinator for the Museum’s, introduction, Erik Lindbergh took the stage to explain the goals of the Powering Imagination organization, including making aviation clean, quiet, exciting and affordable.  This democratization of flight mirrors aspirations of the CAFE Foundation and is reflected in the educational efforts made by Lindbergh’s organization.

He explained that the X-Prize helped jump start private space flight, then asked how we translate that interest into helping form an electric aircraft industry.  Development of this new industry may be crucial to aviation’s survival, with its $2.4 trillion worldwide GDP, but limited prospects.  Noise, for instance, harms health and impedes learning.  Our current aircraft are certainly noisy enough, helping bring about the closure of 1.4 airports per month in the United States.

New technologies can dramatically reduce noise, as demonstrated by Stuttgart University’s e-Genius, winner of the Lindbergh Prize for the quietest airplane at the 2011 NASA, CAFE Foundation Green Flight Challenge sponsored by Google.  Powering Imagination has students at Embry Riddle Aeronautical University in Florida working on conversion of an HK-36 which will allow its silent passage over national parks and monuments.

This is in response to a congressional mandate to protect Park soundscapes, with 50,000 air tour flights per year often intruding on the quiet pursuits of those on the ground.  Current rules require pilots to maintain at least 2,000 feet above the nearest high point, helping alleviate noise that would disturb campers, hikers or wildlife. 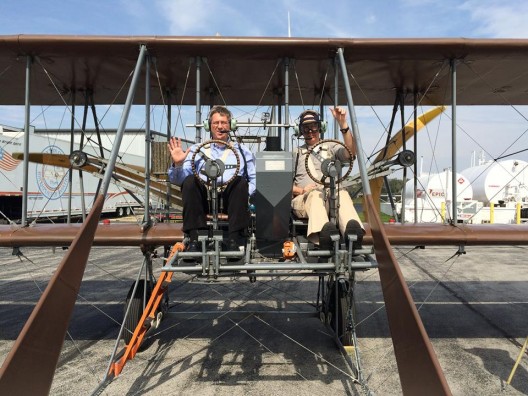 Erik likes to cite real examples from sustainable, quiet electric flight, noting that changing the world is a difficult process, usually confronting regulation, resistance, funding, and strong commitment from opponents of change.  One of Erik’s ally’s, Scott martin from Embry Riddle, is a PhD, Professional Engineer, scientist, and test pilot for the Eagle Flight Research Center at the University.  Embry Riddle was the only school to fly in the Green Flight Challenge, fielding the only electric hybrid craft in the contest.  Embry Riddle students are helping build the electric HK-36 with a YASA 750 motor, NAVISTAR battery pack, and an electrically- controlled variable-pitch propeller.  The system, set up on a test stand, will give accurate measures of torque and thrust, and allow optimization of battery usage.  Testing includes 70 minutes endurance checks, and motor efficiency for the 130-horsepower unit over a wide range of loads and rpms.  Erik notes that the battery management system (BMS) seems to be the tricky part of this endeavor, and that the new technology requires relearning ways to achieve highest efficiency. 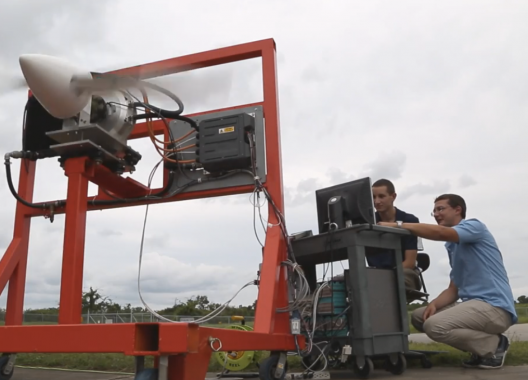 From smaller experimental work such as this electric two-seater, Eric sees further developments with electric, hybrid, and hybrid turbo-propeller combinations, making significant increases in efficiency through transformative, not incremental improvements.  He showed one example of a 5000 shaft horsepower (shp) turbine and 300 shp electric motor integrated within the turbine that could allow multimode operation, engaging full power for takeoff and climb and electric operation for high-efficiency cruising.  Such units would produce much lower emissions and lower noise levels.  Such hybrids might be stepping stones to full electric propulsion in the future, and are a core research area at Embry Riddle.

Distributive propulsion, such as that on the LEAPTech prototype being crafted by NASA and Joby Aviation might merge control with propulsion, with aerodynamic gains from reducing the number of drag-producing elements being projected into the airflow.

Erik and Eric’s leadership in projecting a green future is one of ongoing commitment, and something which drew an appreciative crowd to the Museum of Flight.  The Blog will share more of the insights gained during the assemblage.