Six years ago, we ran a story on hydrogen fuel-cell powered bikes that could travel limited distances, and used canisters of fresh hydrogen to quickly replenish the bike’s energy.   Pragma Industries has introduced a much-improved version of that bike, with range up to 150 kilometers (93 miles).  A pedelec (the motor kicks in when the cyclist pedals), the bike has a unique look and a compact propulsion system.

The system consists of a Brose 36 Volt motor, a 150 Watt PEM (Proton Exchange Membrane) fuel cell, and 150 Watt-hours of lithium-ion batteries in the bike’s down tube.  Pragma has a large amount of material on its technologies, including a helpful explanation of fuel cells and their operation, and a great collection of scientific papers on fuel-cell related topics.

Business Insider reports, “The firm’s Alpha bike runs for about 100 km (62 miles) on a two-liter tank of hydrogen, a range similar to an electric bike, but a refill takes only minutes while e-bikes take hours to charge. One kilo of hydrogen holds about 600 times more energy than a one-kilo lithium battery.

“With bike’s range limited by the size of the hydrogen tank, Pragma is also working on a bike that will convert plain water into hydrogen aboard the bike, using a chemical reaction between water and aluminum or magnesium powder to produce hydrogen gas.

“’In the next two-three years we want to enter the consumer market and massively increase the scale of our operations,’ said Forte.” 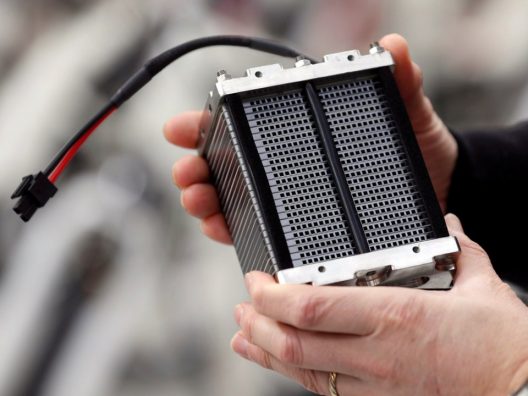 Fuel cell for bicycle is no bigger than its motor

Because these bikes cost around $7,500 (recently lowered to $5,000) and a charging station costs $36,000, most private owners will opt out.  That’s not part of Pragma’s business plan at this point, anyway.  They prefer to see to organizations such as Engie Cofely, a French company specializing in helping municipalities and public facilities transfer their energy needs into clean alternatives.  Pragma recently sold 200 of their H2 bikes to the organization, along with a few charging stations. 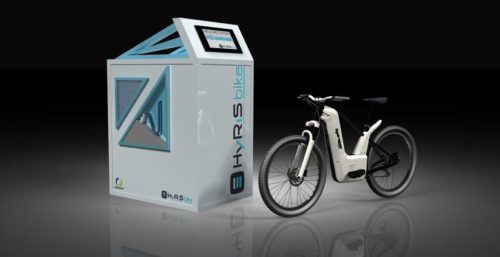 Alain Colle, Director commercial ENGIE Cofely and president of ENGIE Cofely H2 France, shares the plan. “ENGIE Cofely wants to actively participate in the launch of the cycling industry hydrogen through this industrial and commercial partnership with the French start-up Pragma Industries. This sector completes the French ecosystem of hydrogen, to support ever more carbon-free mobility.   Thanks to this strategic drive and the involvement of ENGIE Cofely in this project, Pragma Industries will be able to demonstrate the relevance of light mobility to hydrogen in an international context and pass an industrial milestone. To date, our hydrogen bike is the most affordable and accessible H2 mobility solution to the greatest number. I am very happy that ENGIE Cofely is joining Pragma Industries around a vision and a common ambition: to democratize hydrogen”

Obviously, two liters or hydrogen generating a 250 Watts won’t be of interest to the aeronautical community, or will it?  Brian Allen flew across the English Channel in 1979 on about that much leg-generated power.  Think of H2 pedelecs taking leisurely turns in the clouds. It could happen.  Watch this space.

Beyond that H2 power is imminently scalable, and systems that could power even electric vertical takeoff and landing (eVTOL) machines are in development.