The three biggest words in battery structures are “Area, Area, Area.”  The more anode and cathode area a battery can expose to the electrolyte that carries ions and electrons between the positive and negative ends of the battery, the better.  Most battery configurations, according to researchers at Carnegie Mellon University and Missouri University of Science and Technology, block a great deal of interaction between these elements.  Their solution is to go porous in a microlattice battery, thanks to 3D printing. 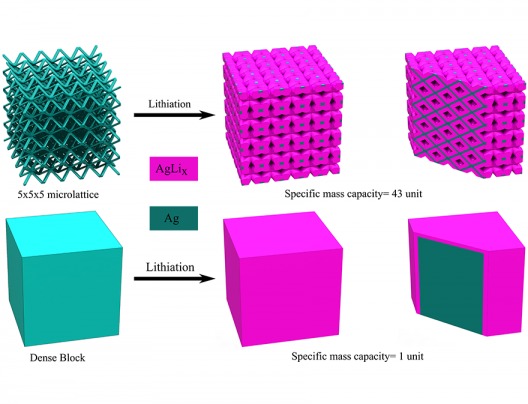 Lattice architecture can provide channels for effective transportation of electrolyte inside the volume of material, while for the cube electrode, most of the material will not be exposed to the electrolyte. Source: Additive Manufacturing 23 (2018) 70-78

The title of their paper (with co-author Mohammad Sadeq Saleh) brings out this “area rule”: “3D printed hierarchically-porous microlattice electrode materials for exceptionally high specific capacity and areal capacity lithium ion batteries.”   The abstract explains, “This work reports a major advance in 3D batteries, where highly complex and controlled 3D electrode architectures with a lattice structure and a hierarchical porosity are realized by 3D printing. Microlattice electrodes with porous solid truss members (silver – Ag) are fabricated by Aerosol Jet 3D printing (AJP) that leads to an unprecedented improvement in the battery performance such as 400% increase in specific capacity, 100% increase in areal capacity, and a high electrode volume utilization when compared to a thin solid Ag block electrode.” 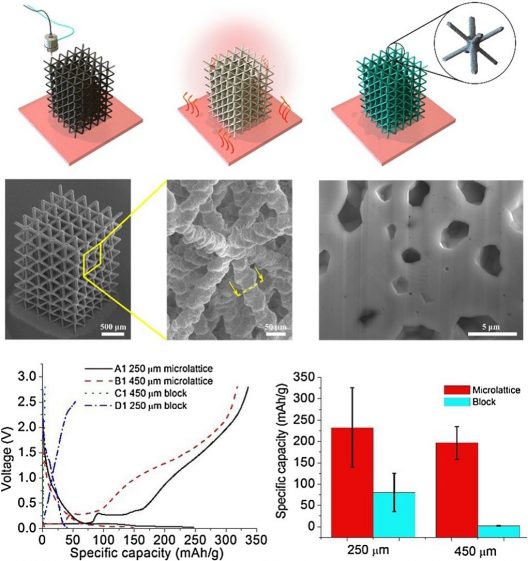 The microlattice structure proved to be mechanically robust, not losing its minuscule shape after 40 charge-discharge cycles, and managed to retain its electrical capacities.  The authors note that the technology can be applied to a wide range of electrochemical energy storage systems.

Panat, an Associate Professor in Mechanical Engineering at Carnegie Mellon, reflects, “I don’t believe anybody until now has used 3D printing to create these kinds of complex structures.  Since this work was done at the laboratory scale, it’s a bit surprising to see that the researchers think it can be “Ready to translate to industrial applications in about two to three years.”  As a droplet-based deposition technology, AJP is one of the only means of creating such precise and complex geometries. Panat asserts, “If this was a single stream of material, [as in FDM (Fused Deposition Modeling)/FFF (Fused Filament Fabrication) technology] as in the case of extrusion printing, we wouldn’t be able to make them.” 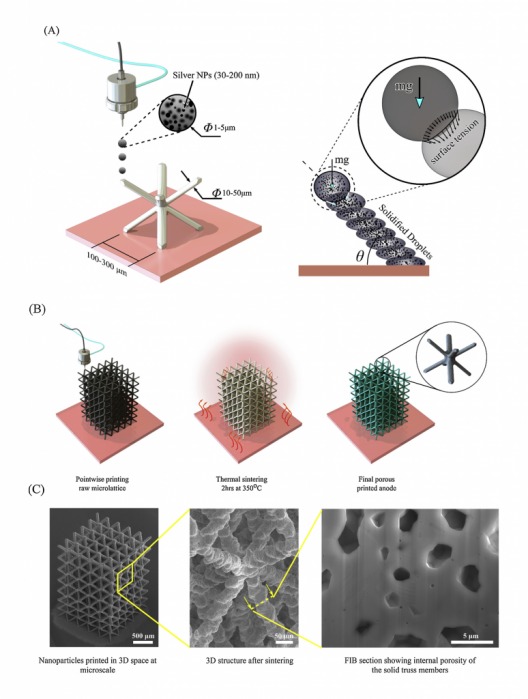 As noted by the researchers, batteries can be lighter for the same capacity as current storage devices – or more powerful for the same weight.  The microlattice’s strength, electrical performance, and potential design flexibility could lead to uses in medical devices, drones and even full-size aircraft.  “For example, a part of a drone can act as a wing, a structural material, while simultaneously acting as a functional material such as a battery.”  This would bring one of your editor’s dreams closer to reality – the Grand Unified Airplane, in which the structure stores energy while collecting it from the act of flight itself.  Sunlight, even the wind itself, could power the aircraft.  With materials like the microlattice battery, this dream could be realized in at least some components of future aircraft.