Promising enough to catch NBC’s attention, new flow battery technology from Purdue University promises quick refueling and up to 3,000 miles range in the electric car of the future.  If volumetric and gravimetric factors can be brought into line, this could be a useful energy storage medium for future aircraft.

John Cushman, Purdue University distinguished professor of earth, atmospheric and planetary sciences and a professor of mathematics and partner Eric Nauman, professor in mechanical engineering, biomedical engineering, and in basic medical sciences, co-founded IFBattery Inc.  The pair developed a “safe and affordable” patented technology that requires replacing fluids in their battery every 300 miles, and then swapping the anode material every 3,000 miles “taking less time than is needed to do and oil change” and costing about $65.  This calculates to about 2.167 cents per mile, considerably less than the 11 cents per mile your editor’s small econobox requires just for fuel.

Cushman further explains the economics from the infrastructure perspective: “It’s a game-changer for the next generation of electric cars because it does not require a very costly rebuild of the electric grid throughout the US.  Instead, one could convert gas stations to pump fresh electrolyte and discard depleted electrolyte and convert oil-changing facilities to anode replacing stations. It is easier and safer to use and is more environmentally friendly than existing battery systems.”

Furthering the use of repurposed service stations, IFBattery’s would be collected and taken to a solar farm, wind turbine installation or hydroelectric plant for recharging.  Cushman says, “It is the full circle of energy with very little waste.  IFBattery’s components are safe enough to be stored in a family home, are stable enough to meet major production and distribution requirements and are cost-effective.”

Economically, the system would have a “flow” of materials at the infrastructure level.  Cushman explains, “Instead of refining petroleum, the refiners would reprocess spent electrolytes and instead of dispensing gas, the fueling stations would dispense a water and ethanol or methanol solution as fluid electrolytes to power vehicles.  Users would be able to drop off the spent electrolytes at gas stations, which would then be sent in bulk to solar farms, wind turbine installations or hydroelectric plants for reconstitution or re-charging into the viable electrolyte and reused many times. It is believed that our technology could be nearly ‘drop-in’ ready for most of the underground piping system, rail and truck delivery system, gas stations and refineries.”

As to safety, Michael Dziekan, senior engineer for IFBattery, adds a significant set of numbers to the discussion. “The battery does two things: it produces electricity and it produces hydrogen. That is important because most hydrogen-powered cars run on a 5,000 or 10,000 PSI [pounds per square inch] tank, which can be dangerous.  This system generates hydrogen as you need it, so you can safely store hydrogen at pressures of 20 or 30 PSI instead of 10,000.” 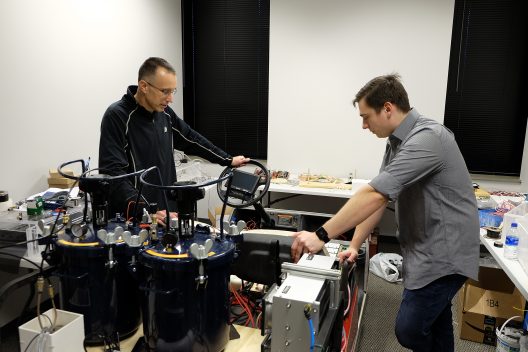 Eric Nauman, Purdue University professor in mechanical engineering and in basic medical sciences and co-founder of IFBattery, and Michael Dziekan, senior engineer for IFBattery, run tests on a membrane-free, flow battery being used to power a golf cart. The battery has the potential to generate enough energy to drive an electric car up to 3,000 miles.  Image courtesy Purdue University

Because the single-fluid technology does not use a membrane or separator, and oxidizes the anode to produce electrons, and reduces the fluid at the cathode, it generates current to power vehicles.  The oxidant is a macro-molecule that lives in the electrolyte, but is reduced only at the cathode.

First tested in scooters and then larger off-road vehicles, the technology will next be tested in industrial equipment and then automobiles, according to Cushman.  He points out, “Historically, flow batteries have not been competitive because of the low energy density.  For example, conventional flow batteries have an energy density of about 20 watt hours per kilogram. A lithium-ion battery runs on 250 watt hours per kilogram. Our flow battery has the potential to run between three and five times that amount.” 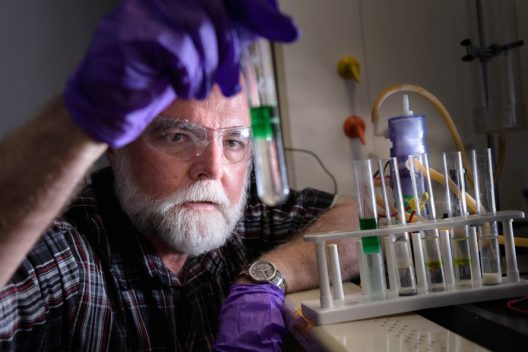 John Cushman, Purdue University distinguished professor of earth, atmospheric and planetary science and a professor of mathematics, is commercializing a technology that could provide an “instantly rechargeable” method forelectric and hybrid vehicle batteries through a quick and easy process similar to refueling a car at a gas station. Image courtesy Purdue University

“We are at the point now where we can generate a lot of power. More power than you would ever guess could come out of a battery like this,” Cushman said.

Naumann adds, “Conventional electric cars like Tesla have lithium-ion batteries that are usually plugged in overnight. Our flow battery uses a water-based single fluid that can run the car like it is a gas engine except it is not burning anything – it’s like a hybrid of a battery and a gas.”

IFBattery licensed part of the technology through the Purdue Research Foundation Office of Technology Commercialization and has developed patents of its own.

The technology aligns with Purdue’s Giant Leaps celebration of the university’s global advancements made in health, space, artificial intelligence and sustainability as part of Purdue’s 150th anniversary. Those are the four themes of the yearlong celebration’s Ideas Festival, designed to showcase Purdue as an intellectual center solving real-world issues.

One hopes that this battery can be sized for practical vehicular use and that the costs of converting existing gas stations will not prevent its expansion into real-world use.  Refills at 300 miles and changing out electrodes at 3,000 miles is not an onerous cost for clean operation. It reminds your editor of refills of his car, back in the day, and swapping out points and plugs.  Younger drivers might look up that maintenance necessity in old maintenance manuals.