If there were a pantheon of technological hipness, right now three front-runners for induction would be 3D printing, aerogel and graphene.  They all rank high on the disruptive technology scale, have enormous amounts of good press, and excite the imagination with their potential.

Lawrence Livermore National Laboratory researchers have gone beyond combining chocolate and peanut butter by blending the three higher-tech ingredients into a rather amazing battery material with excellent electrical and mechanical properties.  We have discussed the idea of structural batteries in this blog, and this new melding of technologies holds much promise.

Aerogel, as defined in the Laboratory’s announcement, “is a synthetic porous, ultralight material derived from a gel, in which the liquid component of the gel has been replaced with a gas. It is often referred to as ‘liquid smoke.’” 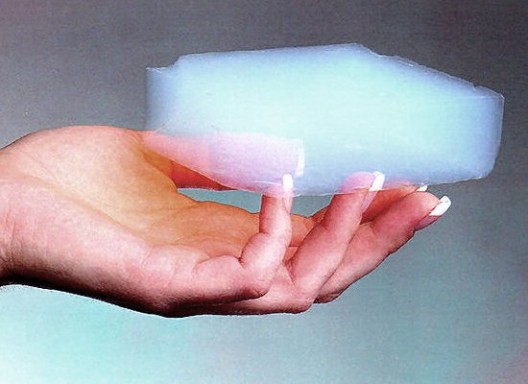 Lawrence Livermore researchers have used a 3D printing technique known as direct ink writing to craft an engineered architecture microlattice with well-defined pores – which are essential to the performance of the lattice.

The announcement explains, “Previous attempts at creating bulk graphene aerogels produce a largely random pore structure, excluding the ability to tailor transport and other mechanical properties of the material for specific applications such as separations, flow batteries and pressure sensors.”  The pores turn out to be important, since the random structure inhibits mass transport.

Marcus Worsley, a co-author of the Nature Communication paper on the research, explains, “Making graphene aerogels with tailored macro-architectures for specific applications with a controllable and scalable assembly method remains a significant challenge that we were able to tackle.  3D printing allows one to intelligently design the pore structure of the aerogel, permitting control over mass transport (aerogels typically require high pressure gradients to drive mass transport through them due to small, tortuous pore structure) and optimization of physical properties, such as stiffness. This development should open up the design space for using aerogels in novel and creative applications.”

The graphene oxide (GO) inks combine an aqueous GO suspension and silica filler to form a homogenous, highly viscous ink. These inks are then loaded into a syringe barrel and extruded through a micronozzle to pattern 3D structures.

Engineer Cheng Zhu, the other co-author of the journal article.says, that adapting the 3D printing technique to aerogels “makes it possible to fabricate countless complex aerogel architectures for a broad range of applications including its mechanical properties and compressibility, which has never been achieved before.”

The research appears in the April 22 edition of the journal, Nature Communications.  Other researchers contributing to the paper include, T. Yong-Jin Han, Eric B. Duoss, Alexandra M. Golobic, Joshua D. Kuntz, and Christopher M. Spadaccini.

Such research shows the potential to make ever lighter, more powerful batteries as just one possibility.  The fact that this featherlike material can also have beneficial structural properties makes this area of research a very exciting one.