The United States military fields soldiers bristling with not only weapons, but batteries.  The average war fighter in Iraq or Afghanistan, for instance, lugs around a 16-pound flak jacket, a sizeable weapon and gear – 20 to 40 pounds of which are batteries for communication, navigation, and powering monitoring and surveillance devices – to sustain life and links on a 72-hour mission.  The military wanted to reduce the enormous and literal burden it puts on its foot soldiers and held a competition in 2008 to find a 4 kilogram (8.8 pound) portable power supply that could provide 20 Watts for 96 hours (1.92 kilowatt hours) of energy. 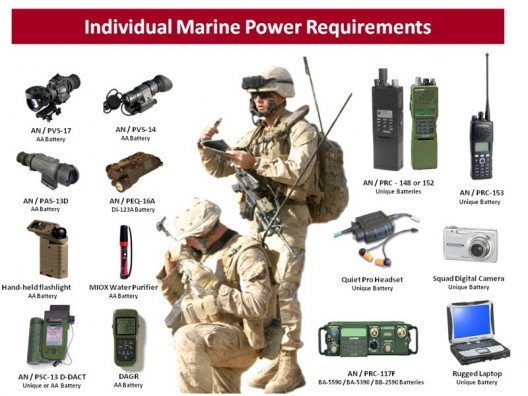 Note the range and variety of battery packs

“The bio-battery has numerous advantages over existing batteries.  The biggest of which is that it allows for instant recharge (through supply of more sugar) in comparison with traditional batteries which require access to power for two or more hours.

“In comparison to fuel cells, the bio-battery has the advantage of a non-toxic, non-flammable fuel source (sugar) which is already in the Army supply chain.  This is a huge logistics bonus considering the military’s one-fuel-forward policy makes providing methanol, hydrogen and other alternative fuels difficult.

“The promise of the technology was recently demonstrated at the [2010] Power Sources Conference (sponsored by the Army) where the bio-battery was connected to an electronic device comprising a Microprocessor and LCD display.  The bio-battery was able to power the system for over 10 hours using less than 20mL (milliliters, or about four teaspoons) of sugar solution.  The current intent of this innovative technology is to integrate it with military systems and demonstrate it in field trials in 2011.” 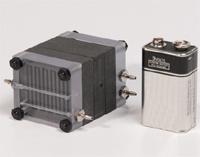 Other enzymatic solutions apparently abound.  This technology could be used with the enzymes in human blood to power implants such as defibrillators, pacemakers, and drug dispensing mechanisms.  It would seem that such devices come with a lifetime warranty.   Probably not immediately transferrable to aircraft powerplant use, such solutions presage other developments, including the use of human urine to power batteries. 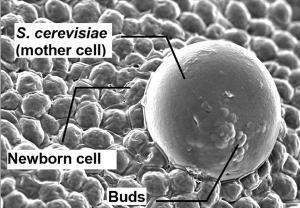 Nokia has even shown a soft drink-powered cell phone, using a commodity usually easier to find than a charging station or available electrical socket. 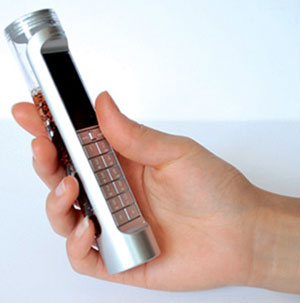 Daizi Zheng, inventor of the telephone, explains, “This is a client project aimed at designing an eco-friendly phone for Nokia. As a result of my research, I discovered that conventional phone batteries are: expensive, harmful to the environment and difficult to dispose of. In addition, the conventional battery manufacturing process consumes many valuable resources. The concept is based on the idea to create a pollution free environment by using bio-batteries as an alternative to conventional batteries. A bio-battery is an ecologically friendly, energy supply system which uses enzymes as a catalyst to generate electricity from carbohydrates (currently sugar). In order to use the bio-battery as a power source for the phone all that is required is a small supply of a sugary drink. Once the battery dies only oxygen and water remains. Bio-batteries are fully biodegradable and have, on a single charge, a potential life-span three to four times longer than conventional lithium batteries. Meanwhile, bio-batteries are a whole new way of looking at batteries and afternoon tea.” 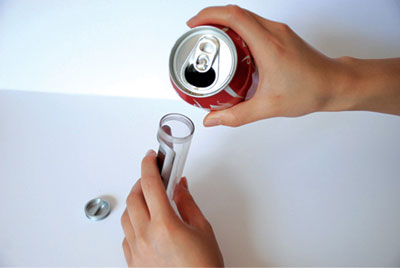