According to BBC News and GlobalFlight.com, QinetiQ’s Zephyr, a 22.5 meter (72 feet) unmanned, solar-powered aircraft has been in the air for more than a week over the Yuma, Arizona Proving Grounds, and program managers intend to keep it there for a total time of at least fourteen days.  Having flown since 6:40 a.m. July 9, its endurance is now four times that of any other unmanned aerial vehicle.   A US Global Hawk holds the current official world endurance record for an unmanned aerial vehicle (UAV) of 30 hours, 24 minutes.  Zephyr’s record is being certified by the Federation Aeronautique Internationale, the world air sports federation.

Jon Saltmarsh, Zephyr’s project manager, says the craft, “Is basically the first ‘eternal aircraft,'”  a name once given to AeroVironment’s Helios and related aircraft.  The 50 kilogram (110 pound) unmanned airplane emulates the flight pattern followed by Andre’ Borschberg in taking the Solar Impulse to a world record for manned solar-powered airplanes.  Its thin solar cells power the twin motors all day, with Zephyr rising to a high altitude while charging its Sion lithium-sulfur batteries to help it retain altitude in a slow glide during the night.  New wingtip and tail design are credited with enabling the efficient performance required for the mission.

Solar-powered high-altitude long-endurance (HALE) UAVs are expected to have a wide range of applications in the future, their persistence enabling fulfillment of  civilian and military applications including reconnaissance, earth observation, and communications.

Mr. Saltmarsh is enthusiastic about the flight so far.  “The launch was absolutely beautiful; it was just so smooth. We had five people lift it above their heads, start running and it just lifted away into the sky.” 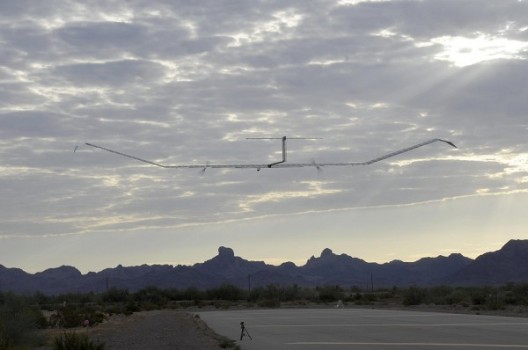