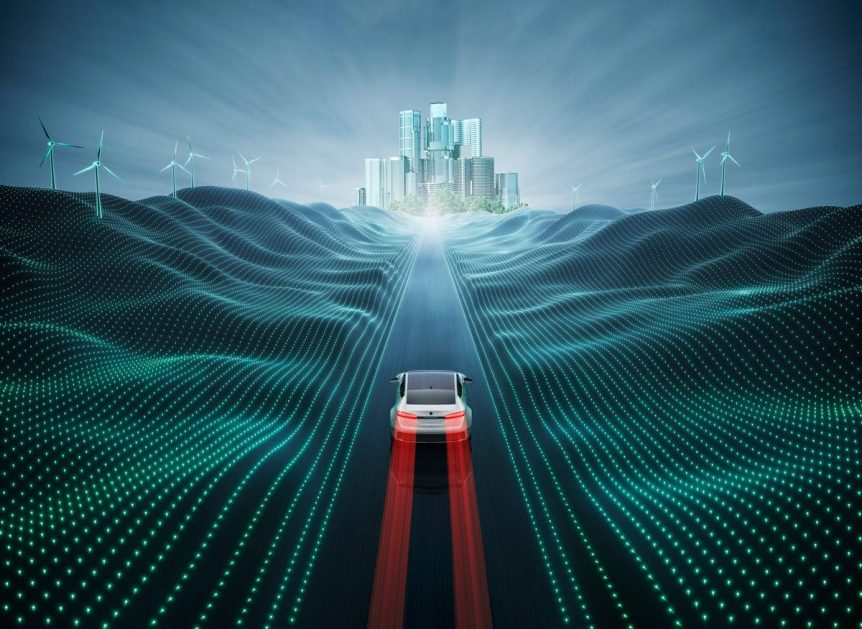 Hiding in plain site next to the San Jose, California International Airport, Quantumscape has been quietly developing a solid-state battery now emerging and trending toward mass production.  With backing from Volkswagen, Bill Gates and a founding member of Tesla, the battery company would make big splash if it used a liquid electrolyte.  It doesn’t.

Wired goes a bit dramatic in describing the faults of batteries with liquid electrolytes.  “IF ELECTRIC VEHICLES are ever going to fully supplant gas guzzlers on the world’s roads, they’re going to need an entirely new type of battery. Despite steady improvements over the past decade in the energy density and lifetimes of lithium-ion batteries, the cells in new EVs still lag behind internal combustion engines on pretty much every performance metric. Most EVs have a range of less than 300 miles, it takes more than an hour to recharge their battery packs, the cells lose nearly a third of their capacity within a decade, and they pose a serious safety risk because of their flammable materials.”

J. B. Straubel, fifth employee at Tesla and considered one of its founders, is a member of the Quantumscape’s board. He notes the anode structure in a conventional lithium-ion battery stalls progress. “Although it’s been optimized for graphite, improvements in the current technology are ‘approaching asymptotic.’” 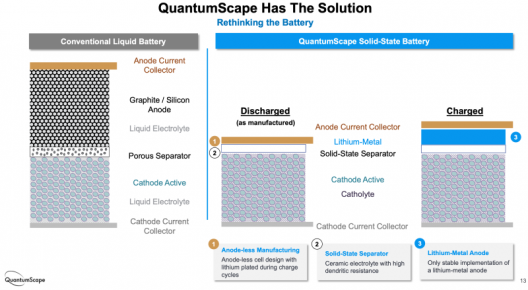 Quantumscape has 200 patents and a $300 plus million funding commitment from Volkswagen.  VW has an incentive to go full electric following its part in the Diesel debacle that implicated many European auto makers in scandals arising from the companies fudging their emissions data – often with onboard hardware and software.  Electric cars offer a viable “out” to achieve compliance with emissions standards and get back in good standing with the public.

GreenCarReports includes this high-level endorsement.  “The hardest part about making a working solid-state battery is the need to simultaneously meet the requirements of high energy density (1,000 Wh/L), fast charge (i.e., high current density), long cycle life (greater than 800 cycles), and wide temperature-range operation. This data shows QuantumScape’s cells meet all of these requirements, something that has never before been reported. If QuantumScape can get this technology into mass production, it holds the potential to transform the industry.”

—Dr. Stan Whittingham, co-inventor of the lithium-ion battery and winner of the 2019 Nobel prize in chemistry

Let’s hope this potential can be realized quickly.

Addendum: It would be nice, in this editor’s opinion, to see hard numbers on the Watt-hours per kilogram for these batteries.