September 2014 will mark the debut of a new electric racing series, Formula E, with all the things essential to aeronautical design – light weight, strength, speed, and power – highlighted in abundance. 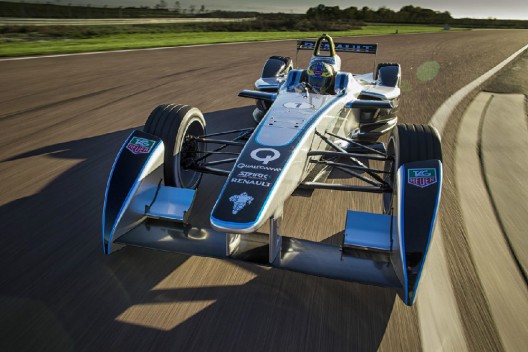 Staged as a series of 10 races around the world on city streets, the series will field 10 teams, each with two Spark-Renault SRT-01E racers.  This is the first electric race vehicle to be homologated, or approved, by the FIA (Fédération Internationale de l’Automobile), the international body overseeing formula and rally car racing.

The cars’ monocoque aluminum and carbon fiber chassis “fully complies with the 2014 FIA crash tests – the same used to regulate Formula One.  The French firm Spark Racing Technology, along with others including Italian Dallara, constructed the vehicles, and McLaren Electronics Systems the electric powertrain and electronics.  Williams Advanced Engineering supplies the 200 kilowatt (270 horsepower) batteries, and a Hewland paddle shift sequential gearbox transmits all that power to Michelin 18-inch tires.  Renault will oversee systems integration.

Setting the races in major cities helps emphasize the social and political side of these races, and should give a broad audience.  Teams headed by Lord Paul Drayson, Sir Richard Branson, and Leonardo di Caprio will doubtless add to the allure and draw sizable crowds. 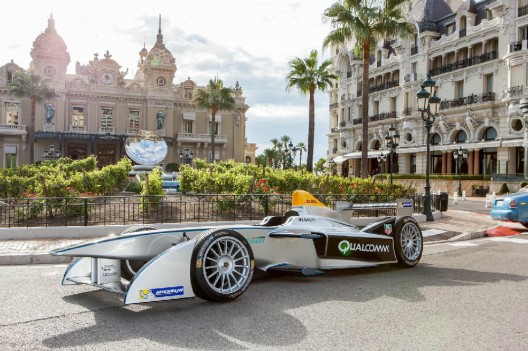 Settings such as Monte Carlo will add to the events’ luster

And if there is any doubt that the races will be fast and furious, this recent “burnout” demonstration in Los Angeles will make skeptics believers.

Besides the Renault-integrated standard vehicles, race organizers will allow competitors to field their own cars, since the Formula operates as an “open championship,” allowing builders to create alternative cars that still follow overall specifications and requirements.

The cars are lighter, less powerful variants of current Formula 1 racers, but highly capable of putting on a good show.  The 5,000 millimeter (16.4 feet) long vehicle will weigh no more than 800 kilograms (1,760 pounds) including the driver, and batteries alone comprise 200 kilograms (440 pounds) of that.

McLaren’s drive train will have maximum power limited to 200 kilowatts (268 horsepower) with a power-saving “race mode” set for 133 kW (180 hp).  A “push-to-pass” button will allow brief bursts of an added 67 kW (90 hp) for overtaking or acceleration out of corners.

Organizers explain, “Maximum power will be available during practice and qualifying sessions. During races, power-saving mode will apply with the ‘Push-to-Pass’ system temporarily allowing maximum power for a limited time.

“The amount of energy that can be delivered to the MGU (motor generator unit) by the RESS (Rechargeable Energy Storage System) is limited to 30kwh. This will be permanently monitored by the FIA.”  This type of system would be similar to kinetic energy recovery systems (KERS) used on Formula 1 racers to retrieve otherwise lost energy from braking and recharge onboard batteries or flywheels.

Ongoing tests of the cars will verify the anticipated acceleration times of three seconds for 0 to 100 kilometers per hour (0-62 mph) and maximum speeds of 225 kilometers per hour (139.5 mph).  These speeds, limited by the FIA, will enhance the safety of the races, while giving plenty of crowd-pleasing thrills in the process.

Onboard electronics will include McLaren Electronics ECU/GCU including data logging system and a power supply management unit.

Promoting three core values of “Energy, Environment and Entertainment,” the series combines motorsports and entertainment to “drive the change towards an electric future.”

To highlight the benefits of Formula E racing, organizers provide an “FIA Formula E Championship Value Creation & Sustainability Report” that includes economic and health benefits that will accrue from these races and their effects on host cities and attendees.

With the first race slated for September 13, 2014 in Beijing, China, the series will dramatically showcase electric vehicle technology in an attention-grabbing way.