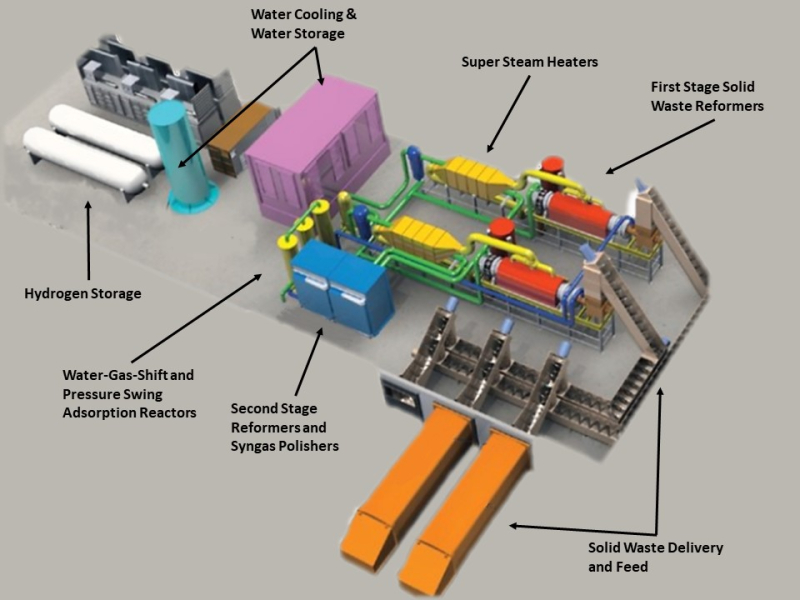 Green hydrogen is getting a lot of press lately, at least partly because of the possibilities it allows in transportation design.  Raven SR, headquartered in Pinedale, Wyoming, has as its mission, “Providing revolutionary, clean technology to convert waste into renewable fuels and energy.”

Clean Technica took notice of the company’s interesting location, deep in “an epicenter of the US coal,” the Powder River coal basin.  Their article notes some of the politics involved.  “The United Mine Workers of America, for one, came through with a statement in support of President Biden’s climate-friendly American Jobs Plan, contingent on its members getting a share of those new green jobs.

“In the same statement, UMWA also lobbied for saving the remaining few remaining coal jobs, partly through policies that ramp up demand for the metallurgical coal used in steel making and other industries.”  Note that Wyoming’s coal is not metallurgical, though, and would never be used for smelting steel.

America hauls a lot of its municipal wastes long distances to get rid of it.  Portland, Oregon, for instance lugs its garbage by truck or train to Arlington, Oregon – 140 miles up the Columbia Gorge.  There, it’s dumped into a landfill.  Opening in 1990, the site has a “projected life remaining of 143 years.”  Even with huge amounts flowing in (2.74 million tons in 2017), Arlington has a remaining permitted capacity of 329 million tons.  It accepts things like treated medical waste, animal carcasses, and used abrasive blast media (such as sand from sandblasting).  That creates some waste of its own – most landfills give off methane – a significant greenhouse gas.  Anything that reduces the need for transporting waste and heaping it in a toxic landfill is to be encouraged.  Waste-to-hydrogen plants are one hope.

Somewhat like pyrolysis, Raven’s “technology does not admit any oxygen into its process.”  The firm claims this provides a cleaner process to convert all feedstock into fuel instead of burning.  It also converts more of the feedstock into synthetic gas (syngas), according to RavenSR.  Because there is no combustion, there are no hotspots or tar buildup in its gasifier.  This reduces maintenance and downtime.

Raven claims their system, “Is simply better for the environment.  We actually reduce greenhouse gas emissions at multiple levels.”  For that reason, “The technology has been approved by the Berkeley (California) Air Quality Department, which is among the most stringent in the country.”

Besides being a non-combustion system, Raven says its technology has four other advantages.

Raven claims their system produces more hydrogen or Fischer-Tropsch fuels (which can be converted to other liquid fuels).  Since their system are mobile and compact, they can be installed at sites next to methane flaring stations, taking a major greenhouse gas out of the air and producing clean-burning hydrogen or other carbon-neutral fuels from it.  Likewise, feedstock can include the previously mentioned municipal waste – with many of the same benefits.

Compactness and flexibility led Hyzon, “a global supplier of hydrogen fuel cell-powered commercial vehicles,” to form a joint venture to build up to 100 “hydrogen hubs” across the U. S. and globally.  Hyzon will acquire a minority interest in Raven SR.

Moving quickly, the partners will build and commission the first hubs in the San Francisco Bay Area in 2022, “Then expand into the rest of the US and globally.”  Hubs will be built at or near landfills and convert “multiple organic wastes”…”into locally-produced, renewable hydrogen for Hyzon’s fleet of zero-emission commercial vehicles.”

Each hub, about the size of two semi-truck trailers (or cargo containers) are expected to take in 50 tons of solid waste per day and produce 4.5 tons of renewable green H2, “enough to power 100 heavy-duty commercial vehicles.”

Craig Knight, CEO and Co-Founder of Hyzon Motors, sees future expansion leading to enhanced efficiency of operation.  “Hyzon aims to be one of the first companies to supply our customers with a hydrogen fuel cell truck, including our own garbage trucks, at total cost of ownership (TCO) parity with diesel-powered commercial vehicles. With our leading fuel cell technology, we are working closely with partners to scale up hydrogen production in the US and globally. In Raven, we see a technology that is highly efficient in waste conversion, scalable and mobile, enjoying a low cost of hydrogen and most importantly, capable of producing the quantity of green hydrogen that our vehicles will need. One hundred hydrogen hubs could convert over 5,000 tons of waste per day and power over 10,000 trucks.