Toyota will sell hydrogen fuel cell- powered cars in the United States in 2015, Bob Carter, senior vice president of automotive operations for Toyota Motor Sales (TMS), USA, Inc. claims, emphasizing, “Fuel cell electric vehicles will be in our future sooner than many people believe, and in much greater numbers than anyone expected.”

Despite there being only 10 public hydrogen fueling stations in the US, with nine of those clustered in and south of San Francisco, and only one on the east coast, Toyota claims that they will be installing up to 100 additional stations in the Golden State in the next decade.  Already, 19 are under development, 20 more are “expected” in 2015, and the state has allocated $29.9 million for further infrastructure creation.

Carter is upbeat, telling an audience at the 2014 Consumer Electronics Show in Las Vegas, Nevada, “Stay tuned, because this infrastructure thing is going to happen.” 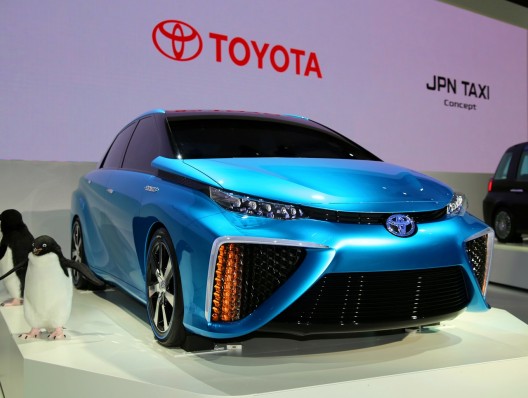 With the exception of the floating hood, Toyota’s FCV Concept looks fairly conventional

Toyota showed off its FCV Concept and an engineering prototype that’s been tested on North American roads for over a year.  The prototype has performed as promised, going 300 miles on a “fill-up,” and doing 0-60 in “about” 10 seconds.  “Refueling” takes about three to five minutes.  Typical of fuel-cell-powered vehicles, the prototype emits only water vapor.

Its fuel cell stack demonstrates a power output density of 3 kilowatts per liter, with an output of 100 kilowatts (134 horsepower).    Calculations give us a compact 33 liters (1.16 cubic feet) volume for the stack – about the size of two breadboxes.

Toyota’s high-efficiency boost converter increases the fuel cells’ output voltage and reduces the size of the motor and the number of fuel cells, making for a smaller, lower cost and better performing system, according to Toyota. 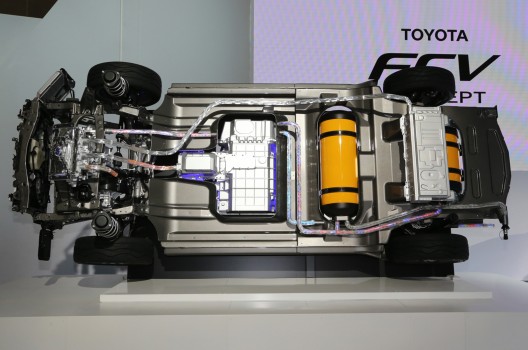 According to Green Car Congress, “Carter said that Toyota’s investment in fuel cell R&D over the last 20 years has been ‘massive’.  Since 2002, Toyota has been testing and developing a series of prototypes in North America. In those 11 years—and more than a million miles—it has significantly reduced the cost of building a fuel cell powertrain. Toyota estimates a 95% cost reduction in the powertrain and fuel tanks of the vehicle it will launch in 2015, compared to what it cost to build the original prototype in 2002.”

If one takes a Honda Clarity, a comparable fuel cell vehicle reported to cost $1,000,000 per copy and drops that to five percent of its original unattainable realm, a $50,000 price tag would be in the mid-luxury car range.  Although not a loss leader at the dealership, the car’s reduced fuel and operating costs would make such a vehicle an attractive long-term investment. 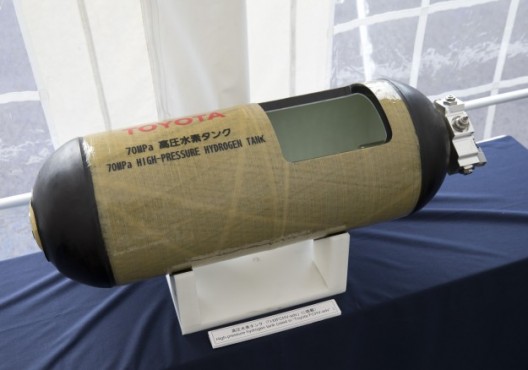 Despite Toyota’s decades-old commitment to electric and hybrid vehicles, Bob Carter explains that, “Toyota has been in the automotive drive-battery business for a long time. We love batteries. We are the world leader in hybrid electrics. That dedication to battery technology will continue. But compared to battery-electrics, the rate of cost reduction we have seen in fuel cell-electric technology has been staggering. That’s why hydrogen fuel cell electric vehicles will be in our future sooner than many people believe and in much greater numbers than anyone expected.”

With recent weather patterns possibly in mind, Toyota claims that, “A fully-fueled vehicle will be capable of supplying enough energy to power a house for a week in an emergency. Engineers are currently looking to develop an external power supply device that could be used in this manner.”  This mirrors Nissan’s recent demonstration of six Leafs to power their research center.

Since the FCV will be introduced in California, Toyota has been working with the University of California Irvine’s Advanced Power and Energy Program (APEP) to locate hydrogen fueling stations in sites that can be reached within six minutes by owners.  Their initial map showed the need to build 68 stations in the San Francisco/Silicon Valley area and Los Angeles, Orange, and San Diego Counties.  These could service about 10,000 fuel cell vehicles, according to ADEP’s conservative estimate.  What drivers will do who want to go from LA to the Bay Area is not reflected in the report.

Neither is even the simple infrastructure cost implied per vehicle.  Hydrogen stations currently cost $1 million to $5 million per unit, with 68 totaling between $68 million and $340 million.  That makes the bare-bones cost per vehicle up to $34,000, possibly generating a push-back from tax payers.  Whistler, British Columbia is disbanding its fleet of 20 fuel cell buses, citing high costs.

Different groups are working on reducing the cost of delivering hydrogen and this will probably be a crucial factor in expanding such networks in the future.  For now, clean driving will be limited to a 150-mile radius of any of the few available stations.

Depending on the source, a nationwide network of hydrogen refueling stations could range from a dauntingly high $500 billion (Argonne National Laboratory) to a low of $4.1 billion (Rocky Mountain Institute).  Even the low number would imply a small number of hydrogen stations compared to conventional gas stations.

This may not be a problem.  California has 9,500 stations for pumping gas, but only 500 for delivering Diesel fuel, for instance.  Jetta tdi drivers rarely complain about range anxiety.  500 hydrogen stations would give H2 drivers a similar freedom to roam.

Hydrogen Cars Now reports on a domestic manufacturer’s take on the problem, with an even lower cost estimate. “Larry Burns of General Motors has a different take on how much it will cost for a nationwide rollout of hydrogen fueling stations. According to Burns, “A network of 12,000 hydrogen stations in the United States would put 70 percent of the U.S. population within two miles of a fueling station. If the stations cost $2 million each (estimates for the cost of a station range from $1 million to $4 million) the network would cost about $24 billion.”

With Toyota, Honda, and Hyundai all pressing on with real-world hydrogen vehicles, it will be interesting to see if infrastructure development can keep up, and at what cost.  These developments will spread into general aviation possibly more quickly than we can anticipate, with ultralights and motorgliders already exploiting this resource.  As auto makers craft better, lighter and more powerful forms of this power system, aviation will surely benefit.