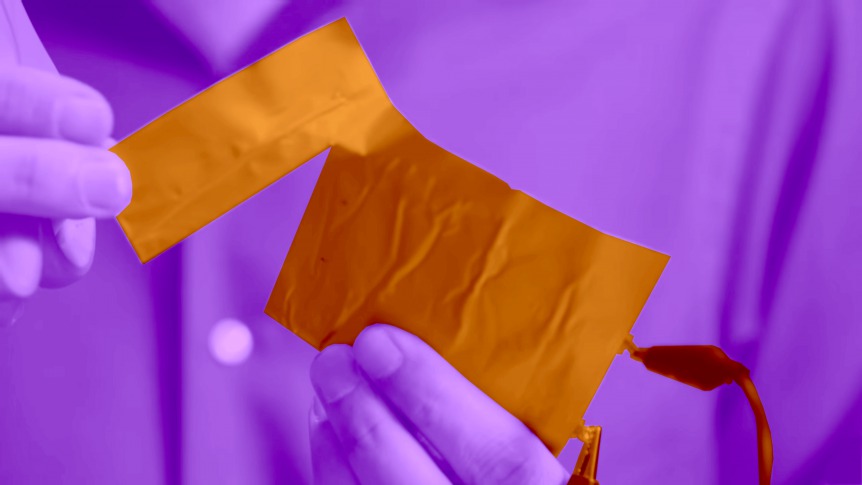 Ionic Materials, A Woburn, Massachusetts-based company, claims to have crafted a battery with an alkaline solid-state electrolyte that successfully resists punctures, cuts and other injuries.  It doesn’t burst into flames like many lithium-based batteries.  In demonstrations, the battery survives 9mm and 25-caliber bullets.

A more personal attack takes place with a screwdriver and paper cutter.

When a “conventional” lithium battery suffers such assaults, the liquid electrolyte leaks and sometimes causes a short circuit, channeling all the energy into the flammable liquid.  Remember recent hoverboard and airline incidents and a spate of smart phone meltdowns to make you more than a little nervous about the cell phone in your pocket or tablet nearby.  Such thermal runaways on a small airplane are absolutely unacceptable.

Ionic Materials claims to have overcome this issue and promises performance improvements over existing chemistries.  ”We have created a solid polymer that conducts ions at room temperature, a world first.  This new material produces immediate benefits for battery manufacturers. Safety becomes possible. New battery chemistries are enabled. Costs are reduced.”

The electrolyte material can conduct 1.3 milliSiemens per centimeter (mS/cm) – better – according to a corporate comparison, than liquid electrolytes, and especially better than other solid electrolytes, which do not perform as well as lower temperatures. 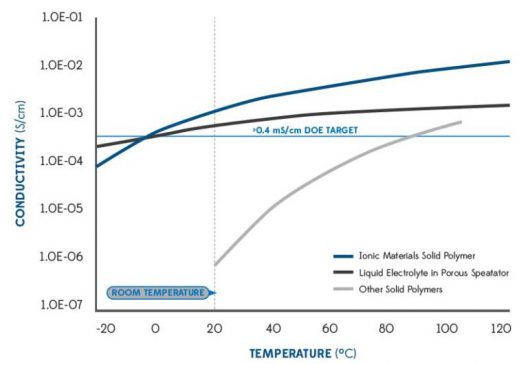 Ionic claims its material allows use of more reactive anodes and cathodes, and can produce a cell with up to five Volts.  This would cut down the number of cells necessary for a pack, reducing the number of connections to achieve a given output voltage.

The company has been working on projects funded by a recent $3 million Advanced Research Projects Agency-Energy (ARPA-E) grant from the Department of Energy.  This will enable Ionic “to focus on the development of a polymer electrolyte and Lithium/Polymer interface to enable Lithium cycling and development of solid intercalation cathodes.”

Ionic Materials sees its products being used in consumer electronics, electric vehicles, and grid storage systems.  The promised advantages of the solid-state cells are enough to raise our hopes.  Let’s hope they are successful in fulfilling them.