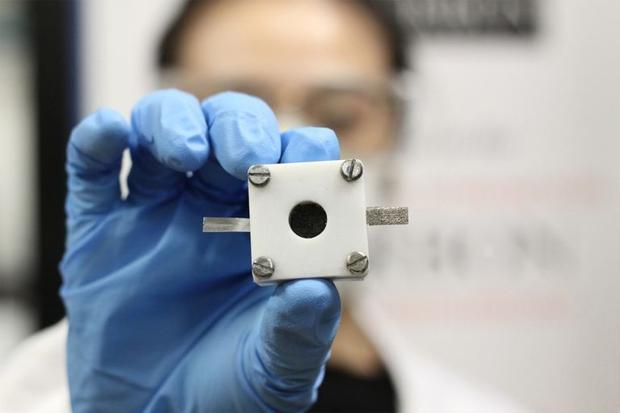 Lithium-ion and lithium-polymer batteries face several problems: they are not making great leaps forward that we hope for, they occasionally burst into flame, and they weigh too much to be all that practical in a pure-electric airplane.  Researchers peer over the alternatives, magnesium, manganese, aluminum, and now, after several false starts in recent years, zinc.

University of Sydney scientists claim to have found a three-stage method of charging zinc-air cells that promises greater energy density and longevity.  One selling point – the relative abundance and low cost of zinc, such cells are cheaper to produce than lithium equivalents.  They theoretically can store up to five times more energy than lithium-ion cells, are less prone to burst into flame, and are even more environmentally friendly.

What’s not to like?  Until now, they’ve been difficult to recharge.  ReVolt tried developing a rechargeable zinc-air battery with an ARPA-E (Advanced Research Projects Agency – Energy) grant, but gave up after two years. Explaining that the zinc-air batteries used in hearing aids were not rechargeable, ReVolt attempted to prevent the growth of dendrites, little follicles that eventually punch through the internal separators and cause short circuits.

Workings of a rechargeable zinc battery.  Sydney researchers managed simultaneous control of the composition, size and crystallinity of metal oxides of earth-abundant elements such as iron, cobalt and nickel

Stanford scientists had investigated a high-energy zinc-air battery in 2013.  Hongjie Dai, a professor of chemistry at Stanford and the lead author of a study published at the time, said, “Metal-air batteries offer a possible low-cost solution.”  He added, “”With [an] ample supply of oxygen from the atmosphere, metal-air batteries have drastically higher theoretical energy density than either traditional aqueous batteries or lithium-ion batteries.  Among them, zinc-air is technically and economically the most viable option.”

A lack of electrocatalysts that successfully reduce and generate oxygen during the discharging and charging of a battery have kept these potentially high-potential cells from success.  But the paper published in the August 14 on-line edition of Advanced Materials, explains how the Sydney team and their partners at Nanyang Technological University developed a new three-stage method to overcome this problem and create an oxygen electrocatalyst at the heart of the research.

According to Professor Yuan Chen, lead author for the paper, the new method can be used to create bifunctional oxygen electrocatalysts for building rechargeable zinc-air batteries from scratch.  He noted, “Up until now, rechargeable zinc-air batteries have been made with expensive precious metal catalysts, such as platinum and iridium oxide. In contrast, our method produces a family of new high-performance and low-cost catalysts.”

The paper explains the three-steps.  “These new catalysts are produced through the simultaneous control of the: 1) composition, 2) size and 3) crystallinity of metal oxides of earth-abundant elements such as iron, cobalt and nickel. They can then be applied to build rechargeable zinc-air batteries.

“Paper co-author Dr Li Wei, also from the University’s Faculty of Engineering and Information Technologies, said trials of zinc-air batteries developed with the new catalysts had demonstrated excellent rechargeability – including less than a 10 percent battery efficacy drop over 60 discharging/charging cycles of 120 hours. It also demonstrates an excellent energy density of 904 Watt-hours per kilogram.