Old tires are hard to get rid of, and left in small mountains in salvage yards, can self-incinerate, causing massive clouds of dangerous smoke and lakes of toxic goo. Fires can last for months, virtually unassailable by fire fighters. Some still structurally sound tires can be re-treaded and gain a new life on the road.  Others, well past their usable life, are shredded and added to an asphalt mix to have a new life as the road. 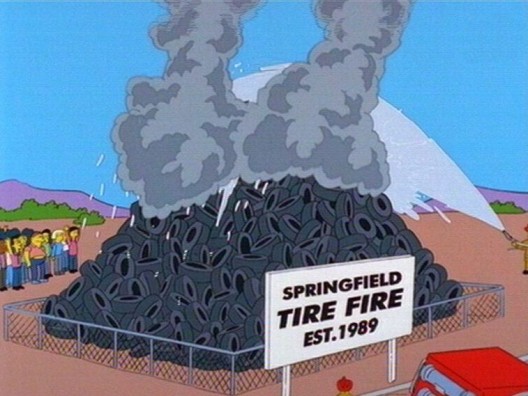 Not so funny in real life, the Springfield tire fire has been burning since 1989 on the TV program, The Simpsons

They might also end up lithium-ion batteries.  According to Oak Ridge National Laboratory, “Recycled tires could see new life in lithium-ion batteries that provide power to plug-in electric vehicles and store energy produced by wind and solar, say researchers. By modifying the microstructural characteristics of carbon black, a substance recovered from discarded tires, a team is developing a better anode for lithium-ion batteries.”

A team led by Parans Paranthaman and Amit Naskar is developing a better anode, the negatively-charged electrode, for lithium-ion batteries.   They have created carbon black from waste tires in a “small, laboratory-scale battery” that gives a reversible capacity higher than that from commercial graphite materials – the anode contributing about 390 milliamp hours per gram after 100 cycles.   Researchers think this is attributable to the “unique” microstructure of the carbon black produced from the waste tires. 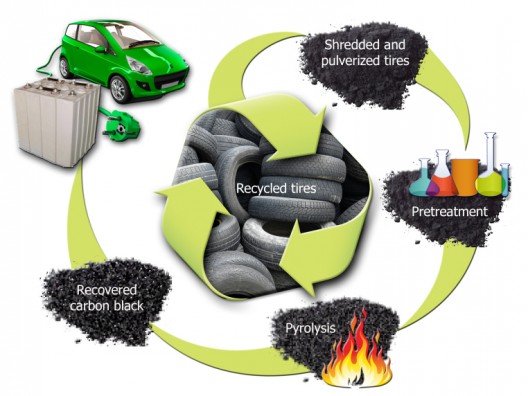 ORNL reports, “’This kind of performance is highly encouraging, especially in light of the fact that the global battery market for vehicles and military applications is approaching $78 billion and the materials market is expected to hit $11 billion in 2018,’ Paranthaman said.”

Naskar added that with anodes accounting for 11 to 15 percent of the battery materials,   “This technology addresses the need to develop an inexpensive, environmentally benign carbon composite anode material with high-surface area, higher-rate capability and long-term stability.”

ORNL reports the team is “working with David Wood and Jianlin Li on a pilot manufacturing process to scale up the recovery of material and demonstrate applications as anodes for lithium-ion batteries in large-format pouch cells. Researchers expect these batteries to be less expensive than those manufactured with commercial carbon powders.”

Although the batteries will probably not be as powerful as those with silicon-based electrodes, they will provide an inexpensive route to EV adoption with performance that may be usable even in aircraft.