Beth Stanton shared an email she received from Alex Kovnat, EAA #452346, telling of Turbotech S. A. S., “A startup company” making very efficient gas turbines.  Turbotech “has patented a regenerative, high-temperature heat exchanger that increases the efficiency of low power turbines by a factor of 2–3. They achieved this by recycling what would normally be waste heat in the exhaust gases to preheat the air entering the combustor, resulting in less fuel required to generate the same amount of power. Turbotech views the turbogenerator as the ‘missing link”’ that will enable the future of hybrid-electric aeronautical propulsion.”

This regenerative ability reduces the amount of fossil fuel required to make things work – a valuable criterion while we await better batteries and cheaper fuel cells.  The French company makes both a small turboprop engine, looking very much like “A downsized version of the AGT-1500 regenerative gas turbine that has served since the 1980’s as the power plant for the Army’s M1 Abrams main battle tank.  Their turbine generator, shown below, would be used as a range extender for small aircraft. 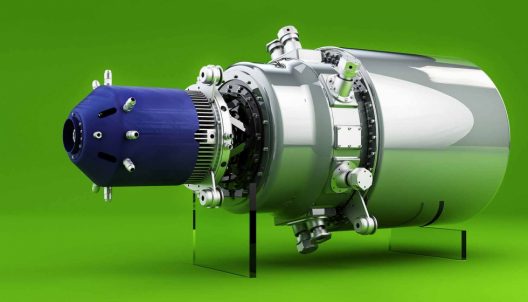 Turbotech TG-R55 turbogenerator can run on jet fuel, biofuel, or even hydrogen

According to Aerospace and Defense Technology, “The TG-R55 turbogenerator is the first onboard electric genset dedicated to the hybrid-electric aircraft industry.”  Consuming a mere 15-22 liters (4 to 6 U. S. gallons) per hour at cruising speed, the TG-R55 manages to provide range extension at a low cost.  Depending on what that unit costs, it may be a viable way for electric aircraft designers and builders to make their craft capable of extended flights.

The cutaway shows and internal installation for the turbogenerators, although one or more could be installed on external parts of the aircraft.  Mike Friend, former Technical Director for Boeing, designed a similar external generator range extender using a small internal combustion engine for power.  Several manufacturers are working on hybrid systems to overcome the range limitations of current batteries. 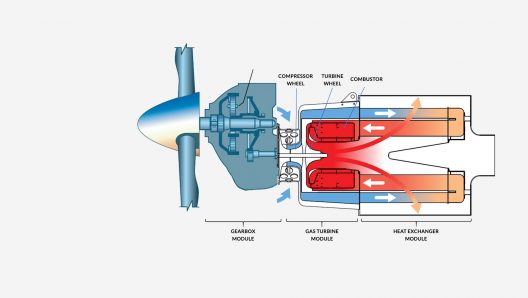 According to Turbotech, “Used in conjunction with batteries, it can offer up to 10 times more range than a full-electric plane.”

The company sees this unit used as part of a hybrid system for aircraft and electric Vertical Take Off and Landing (eVTOL) vehicles.  The low fuel usage and energy storage compared to batteries makes an inviting comparison with battery-powered systems.  Even better, the system can be fueled with liquid hydrogen, eliminating any carbon emissions.  That will increase system weight for pressurized H2 tanks.  Designers will have to perform weight and performance comparisons to make sure they achieve best outcomes for their craft.

The company and its systems are an innovative approach to providing greater range for electric aircraft.  We will be anxious to see who makes the first practical application of their products.