Imperial College London’s Racing Green Endurance team has ended a 70-day adventure driving the length of the Pan-American Highway from Prudhoe Bay, Alaska to Ushuaia, capitol of Argentina’s  Tierra del Fuego province, and southernmost city in the world.  The 26,000 kilometer (16,120 mile) trip had moments of mechanical difficulties and some days of struggle.  The electric supercar was stopped numerous times, sometimes for pushing speed limits, but often to satisfy  police officers’ curiosity. 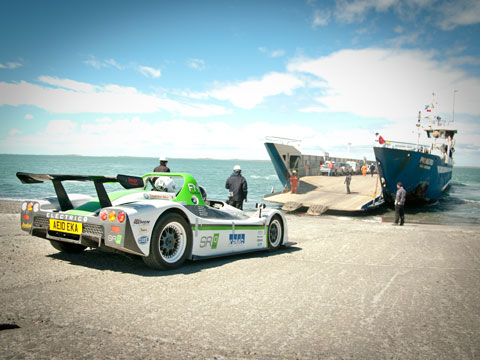 RGE supercar about to cross the Straits of Magellan

Alexander Schey, M Eng in mechanical engineering and instigator of the trip, reports on his final hours on the journey with his co-driver, Toby Schulz, also an M Eng.

“Finally I have a few moments to write the blog I have most been looking forward to write! 2 years of really hard work, 140 days of travelling and 70 days of driving have brought us to this moment, and I hope I can communicate to you just how incredible a feeling it is to have been able to reach the world’s southernmost city after such a grueling challenge!

“Even though it was only a short leg of 215km from Rio Grande to Ushuaia, we didn’t want to leave even the slightest of things to chance! As such, we planned to leave at 10am on Tuesday morning so that we would be sure of meeting our scheduled arrival time of 4.30pm. As we wanted to have a proper breakfast, give the car a quick inspection, and do some pre-finish filming, we were up at 7.30am despite some of us getting a little nervous the night before and not getting much sleep!” 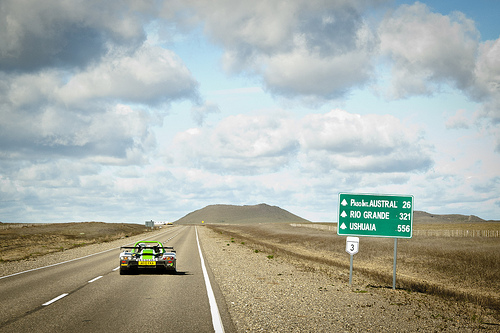 Driving through “the worst weather we had had since entering Argentina over a week ago”, they wiped the rain from their visors and persisted.  As they entered the village of Tolhuin for a native lunch of parrilla, an Argentine meat and sausage specialty, the weather cleared.   Their next few miles were dry and pleasant, but they encountered one last obstacle before crossing the finish line.

“But, just as we were about to enter the city limits, we had our last delay, and what else could it be other than being pulled over by the police?! Why oh why would they want to stop us on our home run! It turned out that they wanted to check our paperwork, and then escort us into the city, but as is usual with these stops, this one being our 46th, this took around 10 minutes. It was frustrating, but as soon as we pulled off and entered the city, we forgot all about it!”

Following the obligatory three bottles of champagne and media grilling, Alex had time to reflect on his team’s magnificent accomplishment.

“However, the story is not over yet; while the trip has now finished, the project still has a long way to go in achieving its objectives. We still want to encourage the younger generation to take up science and technology subjects, and we still want to make people aware of the benefits of electric cars.

“To this end, we have been fortunate enough to secure investment to produce an 8 part documentary series for BBC World News; the world’s largest TV channel with over 74 million viewers a week in over 220 countries. Each documentary episode will be broadcast globally 8 times every weekend, starting on January 1st 2011. So, whatever you’re doing on New Year’s Day, make sure you watch the first episode! I hope you find it just as fresh and exciting as we did whilst actually doing the trip! The website will continue to be updated with what’s going on, events that we are attending, and details of the forthcoming documentary and DVD, so please do keep checking back on our home page.”

Their 1,100 kilogram (2,430 pound) car made daily runs of 250 miles or more, and is a credit to Evo Motors, the 56 kilowatt hours of ThunderSky lithium ion Batteries, National Instruments controller, and other components that performed so well during a true test of their capabilities.  Most of all the car is a credit to the young minds and hands that made it a reality.