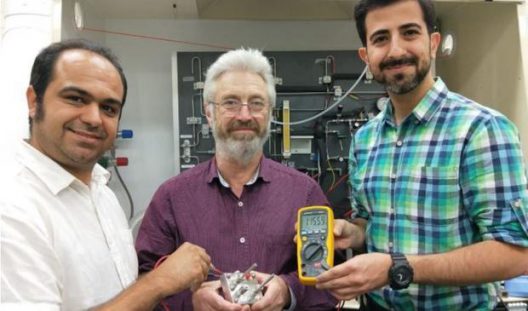 The first rechargeable battery of its type, it is, as reported in Green Car Congress, “Environmentally friendly, and has the potential, with further development, to store more energy than currently-available lithium ion batteries.”

When charging, electricity applied to a catalyst breaks down water into hydrogen ions (protons) and oxygen. The protons pass through a membrane and are stored in the hydrogen storage electrode. In discharge mode, the hydrogen ions are released from storage, pass back through the membrane and join with oxygen from the atmosphere to form electricity and water vapor, as in a standard fuel cell. (Image source: RMIT University)

Interestingly, the battery uses no lithium, but relies on the building blocks of life, carbon and water, for its operation.  In their paper in the International Journal of Hydrogen Energy, Andrews and his fellow researchers explain, “Essentially a proton battery is a reversible PEM [Proton Exchange Membrane, or Polymer Electrolyte Membrane] fuel cell with an integrated solid-state electrode for storing hydrogen in atomic form, rather than as molecular gaseous hydrogen in an external cylinder. It is thus a hybrid between a hydrogen-fuel-cell and battery-based system, combining advantages of both system types.” 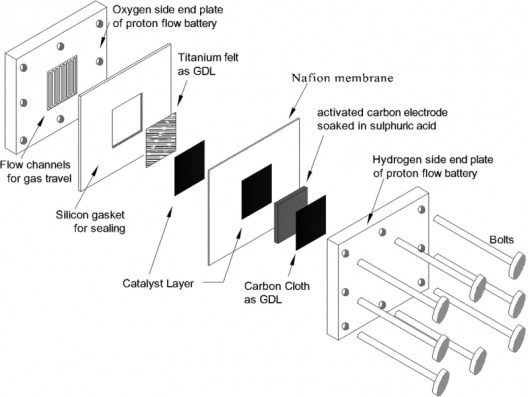 Unlike a fuel cell, RMIT’s battery does not form hydrogen gas during charging.  Hydrogen bonds directly to the hydrogen storage electrode.  During discharge (electricity supply mode), hydrogen atoms are released and lose an electron to become protons again.  The protons pass through the cell membrane, combine with oxygen and electrons from the external circuit to re-form water.

Makers claim “much higher energy efficiency” from their proton battery than from conventional hydrogen systems, comparable to lithium-ion batteries.  Losses from producing hydrogen gas and splitting it into protons as in conventional fuel cells are eliminated. 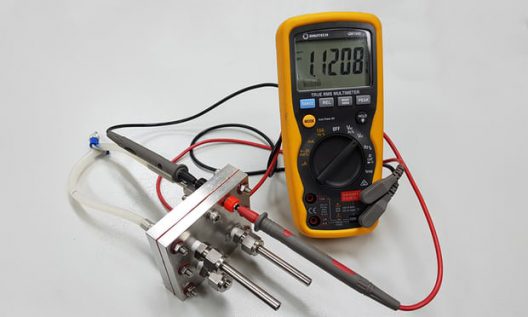 Future proton batteries will doubtless be larger, and generate more than 1.2 Volts

The prototype can generate 1.2 Volts, and researchers hope to scale this small cell to automotive or grid storage sizes.  The use of easily recycled materials offers hope for the cell’s future development.