We like to think of things inside batteries as neatly organized, but Pennsylvania State University researchers may have come up with a less tidy way of making cathodes.

The batteries, according to the researchers, “achieved” a high capacity of 1,226 milliamp-hours per gram and 75-percent capacity retention after 300 cycles.  This demonstrated capacity and longevity is something other experimenters with lithium sulfur batteries have tried unsuccessfully to achieve.

Green Car Reports quotes Jiangxuan Song, one of the researchers on the techniques used. “Lithium–sulfur battery cells using these wrinkled graphene sheets as both sulfur host and interlayer achieved a high capacity of 1227 mAh/g and long cycle life (75% capacity retention after 300 cycles) even at high sulfur content (≥80 wt %) and sulfur loading (5 mg sulfur/cm2). A high capacity of 1082 mAh/g was still achieved with an ultrahigh sulfur content of 90 wt %, and a capacity of 832 mAh/g was retained after 200 cycles. Areal capacity was 5 mAh/cm2. A paper on their work is published in the ACS journal Nano Letters.”

Nitrogen-doping the graphene in the cathode apparently improves the electrochemical performance and helps yield the results shown above.  Such doping improves otherwise lackluster conductivity and leads to better energy density, cycling stability and Coulombic efficiency.  The process deposits nitrogen in the lattice-work-like structure of the graphene and depending on the amount of nitrogen deposited, makes a positive change in the material’s characteristics.

Penn State researchers think this can be applied to supercapacitors with the hope of similar performance improvements. 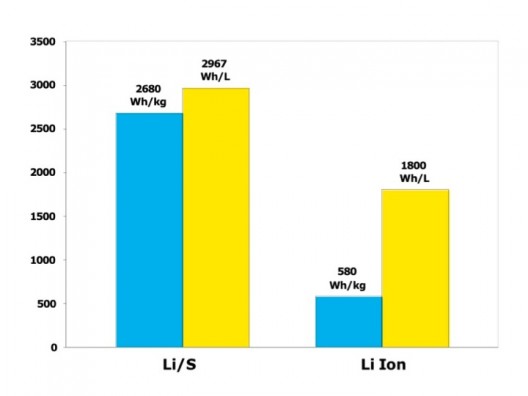 Energy Technologies Area (ETA) at Berkeley state that lithium-sulfur batteries have a very high theoretical specific energy (2,680 Wh/kg), much higher than that of the best Li-ion cell (~580 Wh/kg). “Thanks to this high energy per weight, Li/S batteries could store more energy, and therefore, provide greater vehicle range as well as longer operating times in all applications.

‘Sulfur is inexpensive, non-toxic, safe, and environmentally benign, so Li/S batteries would be cheaper than current Li-ion batteries, and they would be less prone to safety problems that have plagued some of today’s Li-ion batteries, such as overheating and catching fire.”

These pluses, coupled with developments at Penn State, might make lithium-sulfur batteries a plausible route to take for the near future.

The researcher’s paper can be seen in its entirety at the Nano Letters site, or here as a .pdf.